Coldest Night of The Season 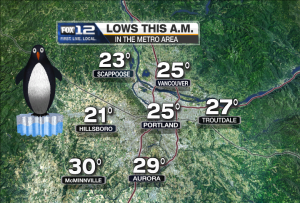 Last night was plenty cold, as you can see from the numbers to the left, but today was a beautiful day.

East wind came pouring right over the top of the Cascades and not just through the Gorge.  That broke up the inversion (along with the cold air yesterday), and cleared out the pollutants.  More important for tonight, much drier air moved in…check out the dewpoints well down into the 20s here west of the Cascades.  The wind turns to a “Gorge only” event by tomorrow morning, which gives everyone except areas east of I-205 maximum radiational cooling.  As a result, I think tonight will be colder than last night.   Good chance we’ll see some upper teens in the coldest outlying areas. 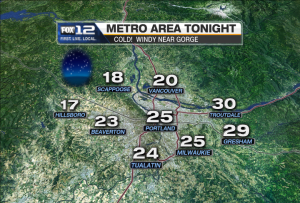 Speaking of east wind, it’s picking up now at the west end of the Gorge with regular gusts up around 55 mph the past hour or so at Vista House.  Someone had unplugged the computer over the weekend, that’s why it stopped reporting by the way.  The wind should peak tomorrow midday, probably similar to or slightly less than the speeds we saw last Friday.

Fog may creep back into the western valleys later tomorrow night and Wednesday morning, then it gets a bit more interesting…

A weak front pushes through the Pacific Northwest Wednesday night and Thursday morning.  Models have been varying on the amount of precipitation and placement of surface low pressure as it moves onshore.  As of this morning, models were all showing the low moving by to the north Wednesday night.  That gives us a southerly wind and mixes out the air in the Gorge quickly by Thursday morning.

BUT, the 00z models are showing more splitting of the upper-level trough, which sends a baggy surface low either right into our area or slightly south.  I see no significant southerly wind in the valleys and no warming in the Gorge through Thursday morning based on this setup.  IF we get thick fog in here Wednesday morning, that’ll keep temps real cold through Wednesday afternoon with no air movement (similar to last Saturday).  When the precipitation arrives, it could still be cold enough for patchy freezing rain or even snowflakes in spots.  Wednesday will defnitely be a “watch the thermometer day”.

Our RPM model is quite weak with the system, only generating maybe .25″ precipitation, the WRF-GFS is similar.  If the low comes in as the 00z models now show, there will be no scouring of the cold air in the Gorge, so a few inches of snow is likely there by Thursday morning.

So, some brief weather fun is on the way midweek.

As for the longer range…if last night’s GFS gave me slight indigestion, tonight’s 00z GFS and ECMWF both made me lose dinner.  They both show little or no precipitation through Christmas Day!  Wow…I can’t imagine the ridge and split flow sticking around for another 12-14 days…but it HAS happened in the past (January 1985, December 1985 etc…).