Warmest May In 18 Years; More This Weekend

We’ve seen 3 days at/above 80 degrees and we have at least one more (possibly Saturday but more likely Sunday) on the way this weekend. 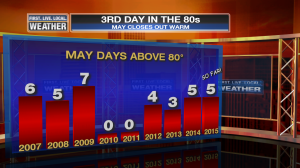 May has been very warm, and it appears it’ll be our 2nd warmest of the past 18 years here in Portland;  the warmest since…last year!

An upper-level low offshore is going to “open up” and swing up over us Sunday night and Monday.  That means some showers return and we get a major marine push…a sort of “hangover Monday” on the way.  Ahead of that, Sunday is looking like the warmer of the two weekend days.

With the warm weather the river temperatures are sure running above last year!  This is due to lack of a melting snowpack and drier than normal spring rainfall.  I was shocked to see High Rocks water temp is running in the low-mid 60s already.  Here are some numbers compared to last year. 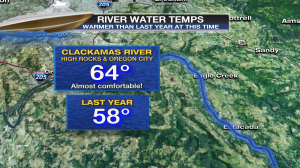 This weekend is also the anniversary of the Vanport Flood, when a large city (pictured)

was erased off the map in a few hours, just miles north of downtown Portland.  I’ve written about it in a previous blog here, so I won’t go over the details again.  It’s a fascinating story; check it out if you’re new to this area and have never heard it.

We’ve only seen .59″ in May so far and it appears we probably won’t see anymore before the end of the month (Sunday Night).  It’s going to go down as the driest May since 1994.  We typically see 13 days with measurable rain this month and so far we’ve only seen 5!  Of course there were 4 days Friday-Monday with sprinkles or drizzle but that wasn’t measurable so it doesn’t count.

If we take the 3 spring months, March-April-May, this will be the driest in 8 years.  The last time we’ve been so dry was in 2007.  So keep watering, assuming you’ve started already.

There is no sign of a wet pattern either.  Although we’ll probably see some showers coming up Monday and Tuesday, the passing upper-level trough doesn’t stick around long.  Both the GFS and ECMWF 10 Day meteograms show no significant rain through the first week of June: 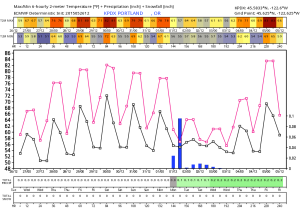 Enjoy the warm weather coming up the next few days.  Weaker onshore flow means more sunshine and warmer temps.  We sure don’t have a hot weather pattern with offshore flow so you don’t have to worry about that.  Highs 80-85 at the warmest.

Starlight Parade is looking good Saturday evening with comfortable late May weather.  I’ll be riding in a car with my kids and Wayne/Amy will be emceeing from a (very high) scaffolding.  All 3 parades are on FOX12 again this year, and will be for at least the next several years in case you’d like to watch from home. 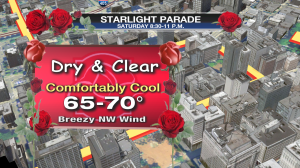 Today was “Melt-Out” day at the Mt. Hood SNOTEL site at 5,400′ in the lower part of the Timberline Ski Area.  That’s the spot where the media goes once each month from late December to late March to check out the snowpack.

Have you ever wondered how long it takes all the snow in the Cascades to melt? Of course it depends on the elevation, with higher elevations (cooler temps) taking longer.  The snow depth sensor shows 4″ on the ground, although that is an imperfect measurement since it’s measured from many feet above via sound waves…or something along those lines.  The Snow Water Equivalent (SWE) measurement is more reliable.  It is a “snow pillow” that measures snow water equivalent by sensing weight on a fluid-filled bag.  Today that measurement dropped below 2″.  It’s 1.60″ right now and was 3.40″ 24 hours ago so it should be gone tomorrow.

You can see the earliest WAS the drought year 1992 when the snow disappeared by May 25th. But the earliest is now May 22, 2015.  The latest was just three years ago in 2011, when the last of the snow disappeared in late July. Now the data period is quite short; only 34 years, so don’t try to draw any earth-shattering conclusions, but the trend is now pretty much flat for the past third of a century.

I think it’s fair to make these two statements as well:

1. At the 5,400′ elevation on Mt. Hood, the snow is not melting any earlier than in previous decades.

2. The Cascade snowpack AT THAT ELEVATION and IN THAT LOCATION is sure not disappearing!

3. This was a terrible snow year and we sure don’t want to see that repeated!

The outflow boundaries (cool air surging out the bottom of the storms) may fire up new storms much closer in to the city over the next hour or two.  Just 11 miles east at KPTV in Beaverton we still have a light east/southeast wind.

Keep a close eye on the radar!  Here’s the latest image:

Thunder and Downpours For Some Wednesday P.M.

Interesting development in the past two runs of mesoscale models, showing quite a bit of thunderstorm action popping up over the Cascades and Eastern Oregon tomorrow.  Then both our RPM and the WRF-GFS take the energy west over Western Oregon.  Seems increasingly likely that SOMEONE west of the Cascades, probably south of the Portland metro area, will get a soaking within the next 24 hours.  Take a look at the rain forecast from the RPM: 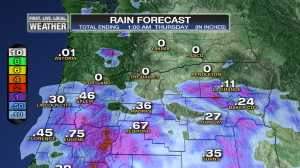 Note they both keep action south of the metro area.

One sure sign that something exciting is going to happen tomorrow afternoon/evening?  I don’t work tomorrow.  I won’t be  west of the Cascades, and won’t even have cell phone coverage from around 1pm-9pm.  I’m going on the yearly recreation trip with my kid’s school.  It’s at the old Rajneeshpuram (now Washington Family Ranch) which is way out in the middle of nowhere.

If thunderstorms do develop west of the Cascades, the First Live Local weather team will be Tweeting and posting updates to Twitter and Facebook.  Both are FOX12WEATHER.

11pm: Storms in SW Metro Only

That was an interesting (and busy) evening.  Just before our 5pm broadcast storms popped up over the southwest side of the metro area and then gradually worked their way to the southwest and into Yamhill county.  A few other isolated showers developed near Aurora and in Clackamas county, but that was it.  The vast majority of us didn’t have rain today…too bad for my garden.

I see a MADIS station had .70″ in Sherwood, another near Yamhill had .80″ and still another near Yamhill received 1.79″!  Wow, that’s a huge soaker like what we saw last June in the West Slope area.  About 10,000 PGE customers lost power and a couple of spots likely saw .50″ hail…near King City and east of Yamhill. That’s according to radar.

The storms didn’t produce much lightning until they pushed southwest and then suddenly spit out 50-80 strikes in just 1/2 hour!

It’s all quiet at 11pm with just a few showers moving west across the east side of the Willamette Valley.  The main action shifts east of the mountains tomorrow with the west side under a solid marine layer.  The upper-level flow will still be light easterly. It IS possible to get thunderstorms over the top of the marine inversion (I’ve seen that happen), but not likely.

So far we’ve only seen one thunderstorm in the lowest elevations…just north of North Plains.  But looking from our Skyline Cam the sky sure looks ominous.  Temperatures are in the mid-upper 70s now too which should allow SOMETHING to pop up anywhere in the metro area in the next couple of hours.

A cluster of strong storms northwest of Mt. St. Helens have likely produced large hail over uninhabited area in Lewis County.  Possibly nickel to quarter size about a half hour ago:

We’ll see how it goes the next few hours!