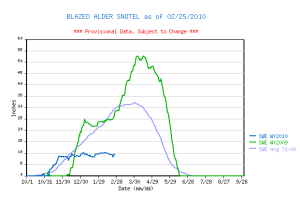 Here are two images showing the poor state of the snowpack up in the Cascades. Friday is Snow Survey Day when the local media gets escorted up to a snow survey site on Mt. Hood by the NRCS. Those are the folks that maintain all the SNOTEL sites in the mountains. If you’ve lived in the Western USA long, you know that we have generally dry summers. The eastern USA is drier in the winter, but moist in the summer; the opposite is true out here. That means we rely on winter snow in the mountains as our “reservoirs” of water to get us through the dry season. So how are we doing? The January survey wasn’t good due to a dry and mild month. Very little changed this month; in fact we are down slightly in most spots during the last 30 days or so.  As a result we can expect low runoff from our rivers this spring.  There have most definitely been years in the past where we get a good dumping of mountain snow in later March or even early-mid April, but nothing of the sort appears likely through at least the first week of March according to the long-range models.

Some interesting things to point out on the charts (click for a closer view).  The light blue lines indicate the average snowpack through the winter.  The green is last winter.  The dark blue is this winter so far.  Notice the difference this winter between the higher elevation sites and lower sites.  Even though it’s a lower than average year up high, the snowpack has continued to slowly increase.  Compare that to the lower elevation spot (3600′ north of ZigZag).  See how the snowpack hasn’t changed in months?  Small snowfalls have been offset by some warm rains which melt the snow.  Also notice the very wet and cool March last year which dumped snow up in the Cascades.  I have a feeling that won’t be the case (as already mentioned) through at least the first half of the month.

As mentioned in yesterday’s post, and even more pronounced on the maps tonight, the split-flow pattern continues next week.  In fact I don’t see all that much rain next week.  I also see the 00z GFS has 850mb temps at/above -1 C degrees all the way through ten days!  No snow below 3,000′ in sight…

I’ll be off for tomorrow, so no posts until Monday. 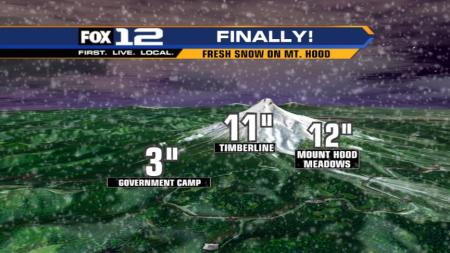 A nice dump of snow up on the mountain today, but it only briefly dropped a few inches down around 4,000′.  The heavier stuff was all up around 5,000′ and above.  A few days ago I had hope that maybe we might shake off the dead El Nino weather symptoms, but looking at the latest models we appear to have more of the same on the way.  One can’t say it’s been an extremely dry winter by any means, but we sure have seen a long period of wimpy and splitting weather systems moving in off the Pacific.  The 00z GFS continues the trend through at least the first week of March.  We get a wet warm front tomorrow evening (more rain in the passes), then a cold front early Friday.  The southern end of that trough splits off and heads to our south Saturday, leaving us with leftover light showers.  We wait for another system later Monday or Tuesday, but that one splits quite a bit too, as seen in the 500mb maps.

A bit more disturbing is the reappearance of some sort of upper level ridging up in Western Canada in the 10-15 day period.  Yeah, I know that’s way out there, but even the ECMWF wasn’t all that wet.  So the general message is that our relatively boring winter is going to continue into early March.    The only positive news is that any sort of ridging over us in early March means warmer and sunnier weather as we kick out of inversion season.  We don’t get strong easterly wind after the first week of March either…so winter is probably just going to fade away over the next 10 days.

I’m interested to see how March turns out.  Some El Nino years we turn wet later in March, in others we’ve remained mild and drier than normal.

Drew’s first powder alert in over two months!  It’s a bit marginal, but the best we can do this season.  Click on the tab above.

That was a chilly morning! Take a look at the low temps. I know a bunch of you had lower 20s this morning; of course the urban areas are generally warmer on calm and clear nights, so we only dropped to 27 here in Portland. Even that was a record for the day AND the coldest temp at PDX in 8 weeks (actually the coldest since the morning of the, uh, uh, little snow “event”). Let’s move on before that wound is ripped wide open again. I just took my “snow” car in to have the studs taken off. Yes, I know living at 1,000′ in the west end of the Gorge that I could see some snow again; in that case the 4 wheel drive will do just fine in a few inches of the white stuff. But the possibility of a widespread snow/ice event is over now that nothing is showing up through the first week of March.

I did spend part of the weekend over in Cove at a family function. That’s the eastern edge of the Grande Ronde Valley, right up against the Wallowa Mountains. That would be a great place to retire with good winter snowfall, lots of summer sunshine, and great summer thunderstorms. But it felt like I jumped back 2 months into December. High temps up around 40 and lows in the upper teens. A very brisk bike ride at about 35 degrees, but a beautiful place.

Back here westside we have moisture for rainfall finally moving in tomorrow afternoon. That’s after 7 days of dry weather. There will be some nice evaporational cooling tomorrow, very similar to what we saw in late December, but 5-10 degrees warmer. We are going for a high of 48 (just changed it to 46 with earlier arrival of rainfall), but I could easily see a high around 45, then a drop to about 40 when the precipitation begins. Either way we’ll see a gray, cool, and eventually wet day on Tuesday. A big reminder that we are still technically in winter. Plus, snow levels may drop to around 3,000′ at first tomorrow afternoon. We haven’t seen that much since December.

The big picture looks wetter for the next 7-10 days, but a still a tendency for ridging over or northeast of us. That still spells relatively weak weather systems and good breaks in the rainfall. The system due in here Thursday looks a bit warmer; probably rain in the passes.

There will be a break either Saturday or Sunday, so the weekend might not be so bad…we’ll see.

The Weekend Is Here!

Not much to say, sunny, sunny, sunny.  I’m a bit behind and have a job shadow in here this evening, so let’s just say I’m skeptical about getting any significant rain next week.  The new 00z GFS once again pushes the rainfall back…nothing more than a few hundreths until Thursday.

Have fun and get your Vitamin D outside this weekend…

An Early Look At Hurricane Season 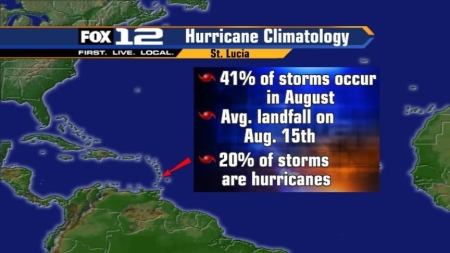 I am still getting use to being the “weather man” among my friends, but always enjoy it when I am asked for advice about the weather.  This question comes from a friend who is getting married this summer and is planning a honeymoon to St. Lucia in August *gulp*.  I was asked when I thought the earliest a hurricane would threaten the small Caribbean island.  Most of us know that it is impossible to forecast a hurricane this far out, but I thought this would be a good time to do some in-depth research on the islands history with hurricanes. It could spark some good conversation about the upcoming hurricane season as well.

Most of the storms that have been recorded since the mid-1800’s were of the tropical storm intensity. A total of 58 storms have hit or skirted by St. Lucia island, and 24 of those occurred in the month of August. As the graphic depicts, only 20% of the storms were hurricanes the strongest being a category 4 storm that hit in 1980.  The geographical location of St. Lucia actually benefits the island in that many storms do not have enough time to develop into strong hurricanes by virtue of being closer to the equator that other locations.

The bad news for my friend is that tropical storms/hurricanes usually make landfall on August 15th, that’s averaged out among all the storms that either skirted or made landfall on the island. That day just happens to fall in the week that she was planning. More bad news: the island is impacted by a storm about every 3 years. Guess when the last storm impacted St. Lucia? If you guessed 2007, you win. It was actually on August 17th when Hurricane Dean passed between a neighboring island and St. Lucia with 100 mile per hour winds. So what will this season bring? Thoughts and predictions?

Nice day!  I went to two different schools today in Sherwood and Hillsboro.  Didn’t even need a jacket and it felt more like April.  Sure enough we finally hit 60 at PDX today.  I forecast 57, so at least it was within 3 degrees, but I would have preferred to see it cooler to verify the forecast.  Either way a perfect spring-like day.

By the way, the picture is taken by Chris Markes…it’s Cape Kiwanda in Pacific City.

The only change the next 3-4 days will be some cooling as that cooler air comes down from the northeast.  The east wind has been quite pathetic so far…we’ll see if it picks up.

The 00z GFS and ECMWF both agree some sort of rain arrives Tuesday or Wednesday.  They don’t agree if it’ll just be a system or two or if it’s a change towards wetter weather.  Still no sign of colder rainy systems through the end of the month.  The Canadian model is much ridgier and very mild through the 10 day period.