By Sunday we will have seen 11 consecutive days above 70!

I checked out the last 20 Mays during some spare time this evening.  Looks like this is the first time we have had a long stretch of nice weather in May since 1997.  In 1997 and 1995 we saw a thirteen day stretch of warm temps, but at least in 1995 there was some rain and a brief downturn during that period.  I remember the 1997 warm spell;  two weeks of summer and then cool and wet spring weather resumed.  That doesn’t appear to be the case this year since I still don’t see a huge change in the weather for next week.

The thunderstorm activity seems to be dying down now after a nice surge around South Sister during showtime tonight.  A nice repeat on the way tomorrow too.
We are going to transition from: 1. A hot upper level ridge just to our southeast to 2. A new upper level ridge over the Gulf of Alaska while an upper level low sits offshore of California (a Rex Block).  The net effect means very little to the forecast.  Surface high pressure coming down from the northeast Sunday through Tuesday keeps a strong onshore flow from cooling us off dramatically through the period.  Basically a very stable weather pattern will continue.  Still lots of uncertainty towards the middle of next week, but no model solution turns us back towards cool and showery weather.   I feel I made a good choice putting up the kid’s pool early this year.  The water temp is up to 70 degrees or so after starting around 55.  Maybe 75-80 by Sunday?
I’ll be off Friday and then back on Monday.  I’m taking some random days off next week too so I can attend to some family (kid) functions.  Mark Nelsen

Not a whole lot to talk about tonight.  I’m loving our current weather pattern.  Not as a meteorologist of course, but it’s wonderful to wake up to warm sunshine almost every day.  I’ve been messing around in the yard and garden each morning (way ahead of last year!), then riding bicycle for a couple hours in the evenings between shows.  Feels like midsummer, except temps have been a bit cooler than we would generally see in July and August.

The weather pattern changes the next 4-5 days are pretty straightforward, then it gets messy after that.  The strong upper-level ridge over the Desert S.W. bulges north the next 48 hours with rising heights over us.  That also shoves the moisture and instability for thunderstorms farther north and west.  No model shows any storms developing either tomorrow or Friday west of the Cascades and I agree.  The flow is too southwesterly and there is no triggering shortwave.  Then the upper high gets “dented” by a trough passing by to the north Saturday and Sunday, turning the upper flow westerly.  That pushes the storms way over to east and southeastern Oregon.  Low level flow here west of the Cascades never goes offshore or easterly during this period;  we just get weaker onshore flow.  I have a gut feeling the 88 forecast high we have for Friday may be too high.  We’ll see.

Beyond Sunday, models are in disagreement.  The GFS and ECMWF both have a strong upper-level trough moving into California (rare for June), mainly bypassing us.  At the same time a weak trough drops in from the north out of Canada.  Neither one bodes much or any rainfall for us.  I see the new 00z GFS just bounces upper-level heights back up over us next week, prolonging the warm spell.  ECMWF isn’t quite as warm.

All in all, it looks like the warmer than average weather is going to continue over the next 7-10 days.  I just finished planting all my warm weather stuff yesterday in the garden;  corn, beans, pumpkins are all in.  Things are definitely running ahead of the past few years on the Nelsen “farm”…okay, back-yard raised beds, but you get the idea.

Salesky In, Rod Hill Out

I’m not working today, but  the weather anchor news is too big to avoid.  Of course this is a KPTV weather blog, but let’s be honest…we all watch various TV stations to see what others are saying, so I’m pretty sure all of you will be interested in this.   Details a bit up in the air but here’s what I have so far:

1.  Dave Salesky is done at KGW as of noon today, he’s heading to KATU in October (a non-compete clause in contract) to be Chief EVENING Meteorologist.  He finally gets to sleep in after 21 years.

2.  Rod Hill was missing in action yesterday at KATU;  and there were rumors he was getting let go…don’t know why or if it actually happened.  We’ll see if he’s on at 5pm tonight.  UPDATE:  Kudos to Adam in SE for noticing, but his personality profile on their website is gone and apparently so is Rod…too bad.

3.  Both are great guys and I sure consider them friends, so I hope Rod ends up on his feet.

4.  Of course confusion at the competition is always good right?  KGW is looking a bit weather “light” right now beging down 1 or 2 people.  KATU seems to have been going through some serious consultant-driven changes recently…I don’t think it was for the better either.

Feel free to discuss, just don’t get mean about it.

Warm End to May

One thing still sticks out on the weather maps tonight…the unusually warm and dry weather is going to continue.  It’s not that it’s been VERY warm or hot by any means, but consistently “perfect”.  The last 5 days have been: 74, 75, 74, 75, 74 at PDX.  That’s very consistent don’t you think?  Sure, overnight temps have been a bit chilly, but with clear skies plus relatively low dewpoints you can expect that.  It does appear that dewpoints should rise a bit the next few days (at least acccording to models), so I raised the overnight temps a bit.

In the short term there is a weak front moving towards us.  It is the leading edge of a large upper-level low pressure area that is sitting over the Gulf of Alaska.  The dead/dying front drags by to our north tomorrow, so we should see a minor marine push plus some mid-high level clouds too.  I notice freezing levels only rise over the next 72 hours though even as the disturbance moves by, so not much cooling either tomorrow or Wednesday.

By Thursday an upper-level high to our south expands northward as a new upper-level low develops farther to the west and southwest of us.  This heats things up a bit, but that’s without the low level flow actually going offshore.  So I figure about 10 degrees warmer from what we had today by Thursday and Friday.  The upper level flow over us and especially eastern Oregon turns southerly around the upper-level high, which MAY bring monsoonal-type moisture north for thunderstorms.  I’ll be over in Maupin this weekend for a bicycle ride…so MAYBE there will be some lightning over there.  By the way it’s a fundraiser for the Juniper Flat Rural Fire Department, so if anyone else wants to ride 40 miles through the desert (fresh sagebrush aroma!) feel free to join me.

In general there doesn’t appear to be a significant shift of any sort towards cooler/wetter weather in the long range maps.  So for the first time in several years, I’m planting my entire garden within the last week of May.  I live in a cooler area and the chilly showers often rot the warm weather veggies.  But this appears to be the year to get going early!

On another note, looks like some shifting around in the Portland TV weather scene.  I alluded to this a week or so ago.  Possibly one morning weather person is moving to an evening slot and booting the evening guy out.  This doesn’t affect KPTV/KPDX or anyone here for that matter.  You are sure welcome to discuss it, but I won’t add any new thoughts until I confirm details in the next few days.

Plenty of rain last Memorial Day weekend…do you remember?  A wild thunderstorm (or actually a cluster of storms) moved through the Metro Area on Saturday evening, producing the greatest 24 hour rainfall on record at PDX.  Nothing of the sort this year…we have some really quiet weather on the way.  I notice there were only something like 5 comments on this blog the last 24 hours!

I just spent some time looking at the 00z GFS.  That plus the 12z ECMWF shows an incredibly stable pattern for the latter half of May and early June.  Not hot, not wet, but just variations in onshore/offshore flow through the period.  An upper-level trough lingers well offshore with ridging to our east.  There are hints of the ridging occasionally pushing back a bit towards the West Coast at times.  That would weaken the onshore flow and warm our temps of course.

Okay, out of time…more tomorrow…Mark Nelsen 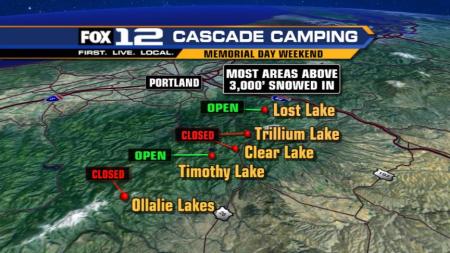 Only a Few of the "Main" Cascade Lakes Open This Weekend

I did some checking on snow depth up in the Cascades today.  Looks  like Clear Lake has dropped from 27″ to 11″ in the last week, while a ridge above Trillium Lake still has over 4 ft. on the ground.    That would explain why both areas are still closed for Memorial Day Weekend camping.  I see Lost Lake and Timothy Lake will be open though, a big improvement from last year.  Remember that a bunch of these spots had trouble opening until the last week of June last Spring due to the record snowpack.

A nice little rain “storm” (for May at least) over the last 24 hours.  Looks like 24 hour totals ranged from .04″ at McMinnville to .62″  at Troutdale (and still counting).  I’ve had .93″ at home in a generally wetter location east of Corbett.  That would explain the moss growing on trees;  plus the mildew I had to scrape off the deck today in preparation for some weekend deck-staining festivities.  It was good that some of us did get a soaking today, since I don’t see any rain in the next 7 days or so.

Not a whole lot to talk about in the forecast…a very mild June-like weather pattern sets up for the next week.  That includes a switch to offshore flow Thursday, back to weak onshore Friday, then stronger onshore Saturday.  So probably no A.M. low clouds Thursday or Friday, but they’ll return Saturday and maybe Sunday.   Ridging seems to be a bit stronger Memorial Day and beyond.  That’s why we have the temps bumping into the 80s at that point.  I see the 00z GFS just in is a bit flatter though.  Either way, a stretch of mild weather is in the offing and I’ve taken a chance planting my cucumbers a bit earlier than normal…hoping this might be “the year”.