I will be posting very little (or not at all) the next 8 days.  It’s Spring Break time in Oregon and I’m taking a vacation with the family through Saturday April 1st.

I’ll be back at work on Sunday the 2nd.  Maybe there will be some sort of upper-level ridging showing up with some 60s/70s in sight?  One can hope…

This is what it looked like in Salem today…what a beautiful pic!  This one (as you can see) is from Clifford Paguio.  I love the bright colors against the blue/gray sky; the pioneer man atop the capitol adds to it as well.

It’s pretty obvious now that Oregon’s Spring Break (begins Friday) will feature a cool-ish weather pattern with frequent weak systems giving us showers at times.  This doesn’t mean it’ll be soaking wet for the next 9 days but I think almost every day will have at least SOME showers.

The showery days are normal for late March,  but typically we see brief dry periods of 1-4 days mixed in with the showery days.  In fact in 2014, 2015, & 2016 March had above normal rain.  Yet each month had breaks in the rain.  This year we haven’t seen more than one dry day at a time.   Check out the rain stats:

Add another inch or two the last 9 days of the month and that will give us a 6.50-7.00 inch March…another soaker!

Ski conditions do look good with this cool weather; I know Skibowl has their pond-skim coming up on Saturday and the weather looks just fine; snow showers and sunbreaks 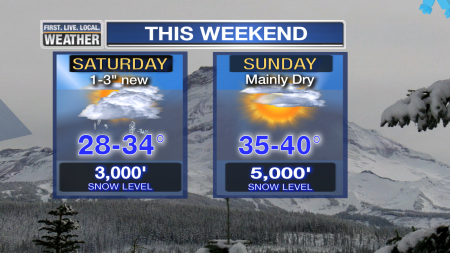 Thunderstorms Popping Up This Evening 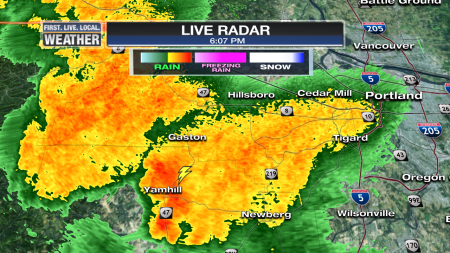 Spring is here and that includes days like this with showers and sunbreaks…sometimes only a few minutes apart!

At least it was warmer today, with the south side of the metro area making it into the 60s while the cool east wind kept Troutdale 10 degrees cooler.

What a beautiful Sunday it was with bright sunshine and comfortable afternoon temps.  That was only our 5th dry day in Portland this month, a month in which our rainfall is running almost double the normal total through the first 20 days of the month.

What really sticks out to me is how slowly plants/grasses/trees are coming alive this year, especially in contrast to the last two very warm late winter/early spring periods.  It’s obvious why: 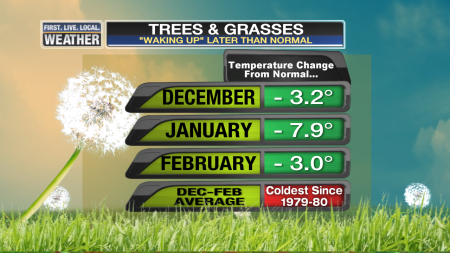 Wow, that January cold departure of nearly 8 degrees is one of the largest, or THE largest, of my career here.  It was a cold month!  But combine the entire 3 month winter period and it was the coldest winter in Portland since I was 10 years old.  THAT explains why vegetation is so slow to get going this year.  March has been close to normal…just slightly below.

A few hours ago the Vernal, or Spring, Equinox occurred.  That means the sun is now halfway between its winter low and summer high position.  Yep, if you consider only incoming energy from the sun, we’re halfway to “summer heat”.  But of course it takes time for the land/oceans/atmosphere to warm so the seasons lag a bit behind.  Here in Portland, on average we tend to see warmest temps about 6 weeks after the summer solstice but only about 2 weeks after the winter solstice.

Note that I use the phrase “astronomical spring”.  That’s one thing that drives me nuts…I don’t know how the “start of spring” ever became associated with this date.  It’s pretty obvious in most temperate climates that the “season” begins well before the solstices/equinoxes.  In meteorology we stick to weather only so we consider all of March a spring month.  Yes, it can snow in a spring month, just as it can be hot in a fall month.  But we consider spring those 3 months between winter and summer.

It’s also quite obvious that the wet pattern is going to continue for a while longer, into the beginning of Oregon’s Spring Break this coming weekend.  Sorry kids!

By the way, while putting together a winter recap for our local AMS chapter meeting tonight I stumbled across this picture.   I snapped it at the end of the last Gorge ice storm of the season (February 9th) when I happened to be at home.  Click on the picture and take a very close look.  At that point I had just under 1/2″ ice on trees/objects and the temperature had climbed to around 33 degrees.

Do you see the green trees in the distance at the top of the clearcut maybe 1/2 mile away at most?  There is no ice just 200-400′ higher in elevation!  The cold layer of air in the Gorge was getting thinner and thinner and 50 degree air was over the top of that for many hours before this time.    You’re looking through a freezing layer of air stuck in a small valley into the very mild air overhead!  That pic should go in a meteorology textbook (minus last summer’s pool).  Within an hour after I took that picture the southerly wind punched through and all the ice was off the trees in a half hour or less.  Lots of noise!  Within a few days beyond that time (around Valentine’s Day) all the ice/snow was finally off my driveway for the first time in 5 weeks.

Today will be showery, although I don’t think it’ll be real wet.  A gusty east wind is blowing through the Gorge too, but at least it’s way to warm to produce freezing rain this time.

Take a look at the rain we’ve seen since it started Monday morning, generally between 1.50 and 3.00″ in the lower elevations in NW Oregon and SW Washington: 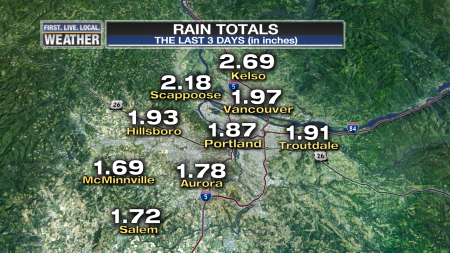 That’s plenty wet for mid-winter, but that’s REALLY wet for mid-March.  Of course we are seeing the accompanying mudslides and water ponding in many areas.  Some minor river flooding is likely the next 2 days but now that rain has cutoff that will help things quite a bit.  The Columbia River in the metro area is forecast to come right up to around flood stage Thursday through Saturday.

For most of the past 3 days we’ve seen a cold front offshore and warm southwesterly flow over us.  Since we’ve been on the warm side of the jet the surface temps have soared in spots without the rain.  Check out high temperatures in Eastern Oregon Tuesday…the first 70s of spring over there:

That must have felt real nice after the long and cold winter!

Tomorrow we get a dry day, then another wet system drags through the region the 2nd half of Friday and 1st half of Saturday.  But I see another good taste of spring weather Sunday through Tuesday.  Abundant sunshine and (Monday/Tuesday) mild offshore wind flow means temperatures likely range from the upper 50s to mid 60s.  Our 62 forecast for Monday could easily be 65 degrees if everything works out right.

THE BIG PICTURE:  We have at least 3 dry days on the way in the next week and the rain showers next Tuesday/Wednesday look relatively light…the weather is looking drier as we head into the 3rd week of March.

That forecast from last Thursday was pretty good.  Friday and Sunday turned out just spectacular with dry weather, abundant sunshine and the first lower 60s in the metro area so far this spring.  Here are the numbers today…

By the way, today was the first day in a month that we stayed completely dry.  Not even a trace of rain for the first time since February 13th.  Of course there have been several days with a trace.  Take a look at the number of dry days each of the past few months of March: 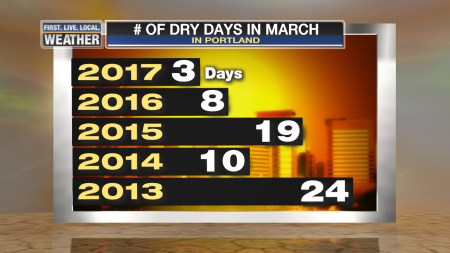 The average number of days we would expect to see dry weather is 13.  Remember 2013 & 2015?  Just a few wet days here and there otherwise plenty of dry weather to kick off spring.

Tomorrow through Wednesday morning we’ll have a stationary front sitting overhead since we’ll be boxed in between a warm upper-level ridge to the east and a cold trough to the west.  A mild southwesterly jet will be parked overhead as well.  This means two solid days of gloomy skies and abundant rain.  The cold front comes through Wednesday and at that point we’ll transition to scattered showers.  The main story:  Monday & Tuesday will be “indoor days” as we say.  With such a warm flow of air the snow level will be way up around 9,000’…think April or early May with this airmass, so at least down here in the lowlands it’ll be a “warm” rain.  How much rain?

I think 1.50-2.50″ is a good number for the next 3 days in the western lowlands of Oregon and SW Washington.  More is likely in the mountains.  Some spots in the Coast Range and west slopes of the Cascades could see 6-8″.  That’s pretty heavy for March; it’s rare to see any sort of flooding this month. 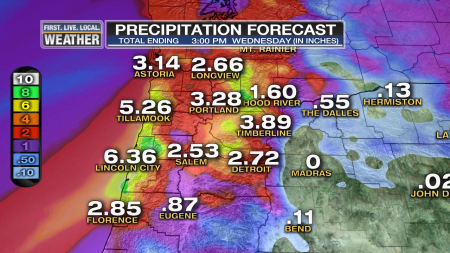 Looking farther ahead, it appears the next chance for a dry day is Thursday, and maybe Sunday/Monday next week.

To help you relax, check out this really neat pic of clouds over Yachats Saturday morning.  Ken Gagne posted this pic of “Undulatus asperatus” on our Facebook page.  The best part is that the pic shows waves not only in the ocean but waves in the sky too.  Nice photobomb by a seagull too.

The Next Week: Spring Temps Arrive

It has been chilly for 3 weeks west of the Cascades, and most of the past 3 months too.  Here in Portland we haven’t seen a normal or above normal high temperature since February 17th!  It appears that’s going to change during the next week.  So for the first time this year we have some warmer spring temperatures on the way and next week should definitely feel more like March should.  Why?  Remember that we’ve often been in an upper-level trough over the past few weeks.  That’s where the jet stream takes a dip and we are on the cold side of that jet.  But check out Sunday: 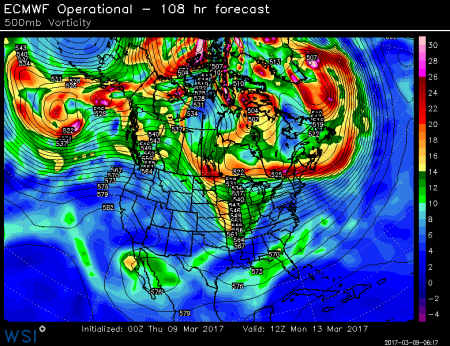 See how there is a ridge, or northward bulge in the jet over the West Coast?  That’s what you want to see in springtime to get us warmer than normal temps.  Models are in pretty good agreement that we’ll see this through much of next week.  Even late next week (Friday) you can see it’s just beginning to shift to the east.  These maps are from this evening’s ECMWF model run: 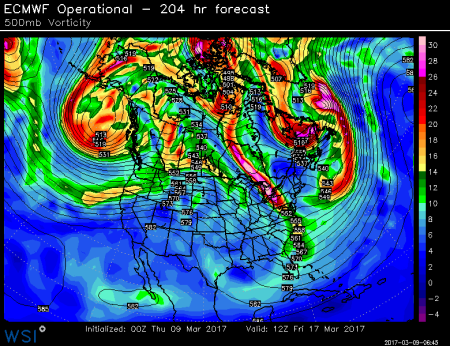 Check out those above average temps through late week!  Then you see we likely turn cooler again.  So the next question is “how warm?”.  Well, first we need to hit 60.  So far we haven’t hit 60, but check out how many 60s we’ve seen the last few March

It’s time and I think it’s pretty likely we hit 60 at least once in the next week, maybe even 3 or 4 times if my numbers are conservative.  Check out the GEFS ensemble hi/low forecast temps again for Portland: 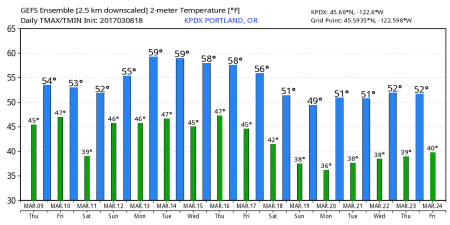 Pretty good agreement on lots of mid-upper 50s beginning Sunday, then you see the cooling coming beyond next Friday.  By the way, there is a good agreement with that downturn in temps again late next week.  Note the ECMWF 850mb ensemble temps going back down below normal after next Friday

Don’t forget to turn your clock forward one hour Saturday night as we go into Daylight Saving Time.  Sunset Sunday evening will be at 7:13pm…there will be some light outside until almost 8pm.