We’re in the slowest season of the year weather-wise; under a relatively stable summertime weather regime.  So the frequency of blog posts slows down too.

Today was another example showing what just a little bit of offshore flow can do.  Models have advertised for several days that 850mb temps would rise up above +15 and we’d get a light easterly drift through the Gorge in the morning.  Combine that with the highest sun angle of the year and temps skyrocketed.  We hit at least 91 in Portland with solid 90s up/down the Willamette Valley

That means we’ve already seen 5 days at/above 90 degrees and we haven’t made it to July yet! 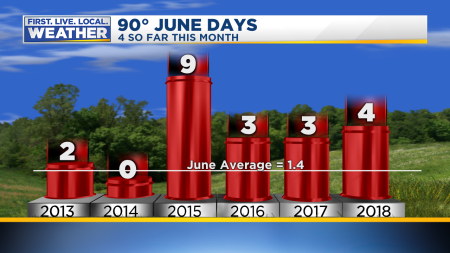 I’m confident we don’t have any 90 degree weather in the next week or so, in fact we should linger near normal temperature-wise over the next week.

By the way, there was just a little bit of fire smoke (nothing like last year!) that drifted in on light east/southeast flow the first half of today.  I noticed it on the east side of the metro area.  GOES16 imagery showed the smoke movement from the fires in north-central Oregon, I’ve highlighted the smoky area in yellow.

A sharp upper-level trough quickly swings through tomorrow morning, dropping a few light showers or drizzle in spots.  But then I expect some decent clearing in the afternoon.  So we might at .01″ or so to the PDX rain gauge for June.  It’s been our 2nd dry month; interesting that most measurable rain has fallen around weekends.  Of course the thunderstorms on Friday missed east & north metro, and part of south too, including PDX. 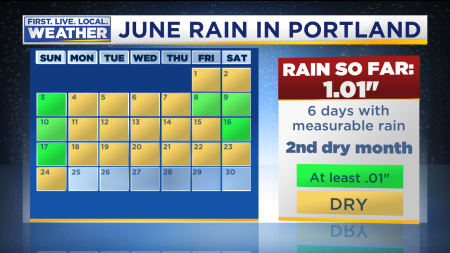 We are more or less tied for driest “late spring/early summer” in Portland.  Just taking the mid-April to late June rainfall, only 2015 is similarly dry.  Do you realize we’ve had only 1.27″ since the middle of April???  Amazing.  No wonder it looks like late July with everything browning up quickly now.  And it’s too late to get a cool/wet spring pattern now, so fire season and drought development is totally dependent on what happens over the next 3 months.  If we remain warmer than normal with no significant cool spells things are going to get rough by the time we get into August!

There does appear to be some sort of upper-level troughing attempting to come into the Western USA around this Thursday/Friday.  Note the 500mb height anomaly from the ECMWF ensembles 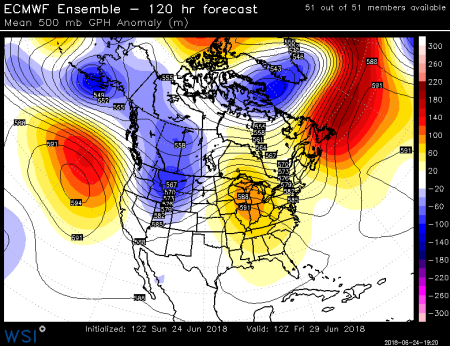 That ridge offshore tries to move in over us those first few days of July, but then it’s interesting that all 3 models I generally look at through the 10 day period show another trough right overhead on the 4th of July.

That said, it’s 10 days away.  It’s also interesting that my 17/16 year old kids haven’t seen it rain on the 4th of July in their lifetime.  We are overdue for a showery 4th, but that doesn’t mean it’s going to happen this time.  I think the main message here is that we have pretty typical late June/early July weather coming up in the next week or so.  No extremely warm or chilly weather, and just a threat of drizzle or a shower over a few different days.

Keep watering your lawns and gardens…it’s going to be a long summer!

Well that was briefly fun.  At least 1/2 of the metro area saw lightning and heard a few rumbles in the distance…a few of you had an excellent show with lots of loud boomers.

From 9:30-11pm thunderstorms fired up in Washington County and then across the south metro down into Clackamas County.  It appears it is most likely over at this point.   This is the radar image from earlier:

The movement was interesting as they were stationary at first and then drifted SOUTH or at least propagated that direction.  It wasn’t the south to north we often see in these summer events.  It appears that was due to us being on the backside of the upper-level disturbance as it passes through Oregon.  I see a couple spots in West Linn & Oregon City picked up around .80″ rain, plus viewer Steve Huffman sent in this pic of 3/4″ size hail in the Farmington area south of Hillsboro

There were also a few strong storms around Stevenson/Carson and the Hood River Valley earlier.  This pic is from Gabor Gardonyi

Unless we get a surprise shower or thick drizzle late tonight or tomorrow morning, it appears this event will leave Portland dry.  It’s back to a major marine push tomorrow, then a thinner marine layer over the weekend.  Summer 2018 rolls on…

9:20pm: A Few Storms Popping Up in Valley/Metro Area

It’s been real quiet here in the valleys so far, but in just the last 20 minutes 2-3 thunderstorms have popped up in the West Linn/Oregon City, Molalla, & Scotts Mills area.  First lightning strike of the day in the metro area is around Rosemont Ridge area of West Linn.

The upper-level disturbance is doing it’s job.  Keep an eye on the sky the next couple of hours and enjoy any light show we get.

Marine air is pouring inland…check out those chilly valley temps! 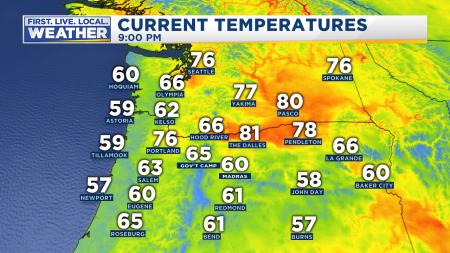 As forecast, big thunderstorms have popped up over the Cascades this afternoon.   The current radar/lightning image:

Several have likely produced damaging hail…that possibly only deer, elk, or bears noticed.  Just about all of them have been over forested areas and not in towns.  Although at this moment I see one may be producing large hail very close to Lost Lake

These storms have unusually tall tops for our area, at one point I saw one reach 45,000′ as estimated from the radar.

The lack of cloud cover means today is a scorcher in the metro area.  Check out the 94 at PDX this hour!  By far the hottest day of 2018 so far 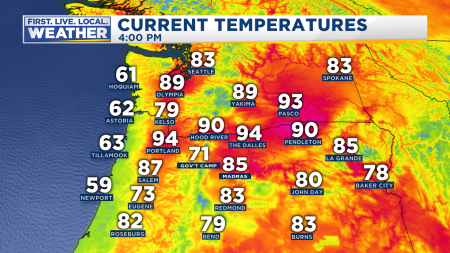 The message remains the same for this evening:

Today was a warm one, we hit 91 in Portland, our 3rd 90 degree day so far this season.  Let the annual 90 degree day count begin…

Tomorrow the atmosphere overhead warms slightly, plus we don’t get any cooling onshore flow until after 5pm.  That tells me we have a good chance of hitting 90, but it all depends on thunderstorm cloud cover.  If it arrives by 3-4pm we’ll stay in the 80s.

Speaking of thunder…the weather pattern tomorrow screams THUNDER ACTION to this weather geek.  We have a perfect setup for Cascade thunderstorms to spread down into portions of the western valleys of NW Oregon and SW Washington.  An upper-level “wave” moves overhead.  Note the southerly wind flow at 500 millibars over us Wednesday.  That’s around 18,000′ up.  The little kink in the lines in SW Oregon shows the disturbance moving up through Western Oregon.  There is plenty of lifting ahead of it.

Models are all in agreement showing Lifted Index well below zero (lots of instability). Lots of moisture will be available overhead with precipitable water up around 1″ or more.  That’s a juicy atmosphere.  Lots of CAPE available as well

The WRF-GFS is showing a nice blowup of storms between 1-8pm…here’s the simulated satellite pic at 8pm:

I’ll be here all afternoon/evening tomorrow and we’ll be on the air of course from 5pm onward.  A rare busy summer weather day in the Pacific Northwest!

Hottest Day This Year, Then Thunderstorms Roll In

This has been a nice little “welcome back to work” evening for me.  I’m sick (who gets sick in June?) after doing a cruise with my family through the western Caribbean the past 7 days.  We hardly saw any rain, then I think I found more lightning right over Portland once I get back!

First, we had our hottest day of the year so far…hitting 92 at PDX

Then, as models had hinted…thunderstorms developed over the Cascades and moved down into the eastern/central part of the Willamette Valley.  Note the UW WRF-GFS morning run showed the thunderstorms…this is a 24 hour rain total: 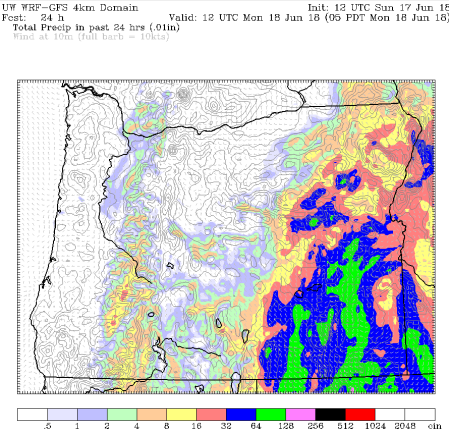 The UW-MM5 model showed the same thing but (this really hurts), King ECMWF did not bring showers over us.

But in addition to areas of heavy rain…

A strong surge of wind poured across the metro area as cool air rushed out of the bottom of those storms and spread westward.  Peak gusts were very impressive and the line of wind could be seen on the radar reflectivity as well. 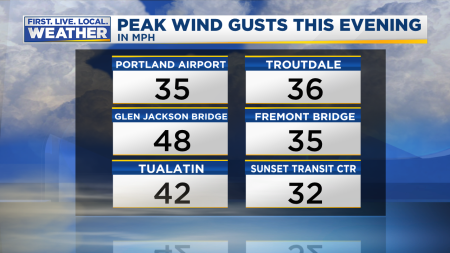 At this hour almost 10,000 PGE customers are out of power…rare for thunderstorms in our area.  Quite a few broken limbs around the area.   30-40 mph gusts are pretty strong for June!

We remain in a very warm airmass the next 3 days, so high temperatures will still be around 90 (plus or minus a few degrees) through Wednesday.  The thunder action should remain over/east of the Cascades tomorrow.

The kids are out of school, it’s June, and I’m off on vacation through Saturday the 16th.  No posts during that time.  Hopefully no hurricane, tornado, or blizzard…