There is a good chance we’ll set the all-time April rainfall record within the next 24 hours here in Portland.  As of 9pm we’ve received 5.04″ rainfall this month, the 3rd wettest of all time.  The record is 5.26″ set in April 1993.  Of course that means we need less than .25″ rain to break the record.  There is one more surge of showers coming through later tonight and tomorrow morning.  That needs to produce the needed rain since we really dry out tomorrow afternoon and showers on Saturday look very sparse.

Along with the rain moving through the area this afternoon/evening, it was a really cold airmass.  Widespread snow has been seen above about 1,000′ with sticking just above that elevation.  Had a report of 3/4″ east of Corbett at 1,800′.  That’s just totally inappropriate for April 28th…oh, and you can add in 10-12″ fresh powder at Timberline and Meadows in the past 24 hours.

The reason for the low elevation snow this afternoon was a nice shortwave curling inland, clearly seen in satellite and radar imagery.  The solid cloud shield and rain did keep the thunderstorms away though.  We really need the sunbreaks to get the big hail and thunder action this time of year.

It appears that this will probably be the final really cold airmass of the season (sticking snow down below 2,000′) since models show a significantly warmer patter beginning on…May1st (Sunday).  It may not be totally dry next week, especially on Monday, but we should see the longest period of 60+ temps so far this season and mainly dry weather.  We get upper level ridging Sunday, a weak system moving through the ridge Monday, then the ridge returns with higher upper-level heights and warmer 850mb temps Tuesday-Thursday.  We pushed the forecast highs Wednesday-Thursday into the mid 70s due to those 850mb temps around +10.  Record highs are around 90, but you’d need 850 mb temps up around +20 with east wind for that. 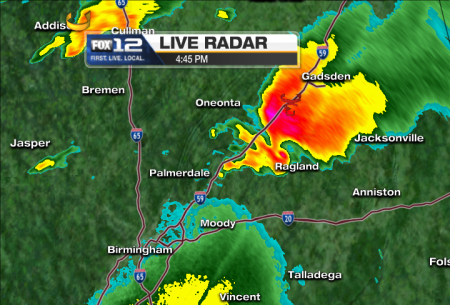 Day #3 is apparently the “charm” as massive long-lived supercell thunderstorms are raking the southern USA.  Right now there are several tornadoes on the ground, including one you can see as a “hook echo” on the radar image below just northeast of Birmingham, AL.  Look at the curl just north of Ragland!  That tornado has been on the ground quite awhile.  Then take a gander at the following image; the tornado reports in the past 24 hours.  Of course 1 actual tornado can receive several reports as it’s seen from different vantage points, but either way a huge outbreak of killer tornadoes makes our whining about rain showers and cool weather seem a little bit pathetic doesn’t it?

The Great Migration: Birds on Radar

Tonight’s radar shows the last few showers dying out as the evening goes on, but it also shows what I consider a remarkable sight.  The spring migration of birds north into Canada and the Arctic.  Check out the image at 8:45pm, then compare it with one hour later.  Do you see the sudden explosion of echos in the Willamette Valley?  Those are migrating birds.  How do we know?  For several reasons.

-This only appears in Spring and Fall

-Our wind between 1,000′ and 10,000′ is light westerly tonight, but THESE echoes are moving straight south to north at 25-35 kts!  Those guys/gals are in a hurry to get up north and get on with the family-making!

-A study presented to television meteorologists a few years ago at a conference pointed out that it only takes a few geese for an echo to show up.  It’s not like there is a “wall of birds” moving overhead, but there is plenty of avian action!  Remember the surface area of a goose or duck (along with smaller birds) is significantly greater than a hail stone.

-The birds prefer to fly at night since there is less turbulence in the atmosphere then.

Now maybe I read too many issues of Mother Earth News while on vacation, but I think mass migrations are fascinating.  Year after year these birds, much smaller than us, fly thousands of miles TWICE.  So while you sleep tonight, think about the thousands of birds working their way north over your head.

By the way, it’s not exactly a party movie, but my kids enjoyed Winged Migration, a movie about this semi-annual phenomenon.

As for weather…more rain coming the next 3 days!

April Ends Rainy, but a Brighter May?

Last week was pretty nice; in 8 days at PDX we only had .16″ of rain!  That was the break from the rain.  But starting Easter Morning the rain came back and today we saw daily rainfall records at Vancouver and Salem.  That plus hail, some thunderstorms in spots, and almost a foot of snow in the mountains.  We are within 1″ of our April rainfall record too.  The wettest April was 1993 when 5.26″ fell at PDX.  So what happened in May that year?  I remember…something like 4.50″ of rain.  Yuck…

Looking at the models tonight, there MIGHT be some hope for drier weather as we head into the first week of May.  The 00z GFS is drier after Friday, more like the earlier ECMWF runs.  I don’t hold high hopes for this solution since it’s the first GFS run to show a large scale change to more ridging on the West Coast.

Some wind excitement this morning (at least in the forecast).  I was busy with Easter activities yesterday and didn’t even notice, but apparently there isn’t much to get excited about anyway.  A low pressure system just swung by to  our south, and we’ll get a breezy west-southwest wind here in the Metro area this afternoon.  No high winds or damaging wind though.  If the low would have gone by to our north it might have been a different story.  A very wet week to end April on the way too!  There

Brian MacMillan and I put together a podcast at the end of last week for your listening pleasure.  It’s 30 minutes of weather center chat, kid’s questions, and Stephanie Kralevich yelling in the distance.

Give us your feedback; we are considering doing these on a regular basis. 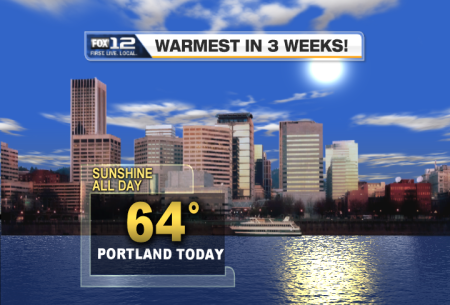 You REALLY need to get outside and enjoy the weather tomorrow for two reasons:  it’ll probably be the warmest day of the Spring so far, and it’s the only warm and sunny day in our 7 Day forecast!

Today we hit 64 degrees, actually a notch or two warmer than I expected.  The downsloping wind coming off the Cascades did the trick late this afternoon, warming the lower atmosphere nicely.

That offshore flow continues through tomorrow morning, then the wind goes calm in the afternoon.  That plus continuous sunshine is the perfect setup for maximum heating.  We kept the 70 degree high in the forecast for tomorrow.  My “magic chart” shows a high tomorrow somewhere between 68 and 74 degrees, basically in the past these conditions have produced those high temps.

As a result, I expect to spend ALL of tomorrow pulling weeds, spreading mulch, riding my bike, relaxing on the south side of the deck, and giving those little chicks and ducklings another field trip out into the garden.

Easter Saturday should be spectacular, Sunday not so much, but here is the forecast:

Easter IS unusually late this year.  Jim Todd sent this great bit of Easter information to us today.  Jim runs the Planetarium at OMSI.  I’ve always had a keen interest in history…if you do as well, you might want to read on…

This question comes up every year, with a bit of puzzlement, too. But for this year in particular, many people have commented on Easter’s. Do you know why the holiday’s date changes each year? Other major holidays throughout the year have set days: July 4th; Labor Day; Christmas, etc.  It’s often hard to comprehend Easter’s association with the Vernal Equinox, the full moon, and Sunday.

Each year, Easter’s date bounces around the calendar.  Why is this?  In 325 A.D., The Council of Nicaea, commonly regarded as the first Ecumenical council of the Christian Church, convened in ancient Nicaea (now Iznik,Turkey) at the request of Constantine I. His goal for the council was to restore order in the young religion of Christianity, then beset with internal disagreements and controversy.

As a side note, the council was also instructed to arrive at a means for calculating the annual observance of Easter, which at the time coincided with the Jewish holiday of Passover. Throughout Constantine I’s kingdom, the Christian Passover or Easter was observed on different dates. Attributed to Pope Saint Soter and followed by believers in Alexandria and Romewas the formula which is followed today: Easter is observed on the first Sunday after the first full moon following the vernal equinox. This neatly avoided following any particular calendar, and staggered both Jewish and Christian holidays.

How did the moon get involved in all this?  The number of lunar cycles in a year is uneven.  This means that the time of the Passover celebration is a moveable feast during the month of March and April.  The council of Nicaea involved the full moon to provide the pilgrims, who traveled to Jerusalem, with a bright night sky in order to assure their safety.

For Easter in 2011, the vernal equinox is on March 20, the time when the sun is directly over the equator.  The full moon for March is on the 19th, before the equinox.  In April, the full moon is on Sunday the 17th.  But church astronomers added further stipulation that if the first full moon occurred on a Sunday, then Easter should be celebrated the following Sunday.  In this case, Easter 2011 will be on Sunday, April 24.  This is just a day short of latest date possible of April 25.  The last time this occurred was in 1943 and the next time it falls on April 25 is the year 2038.  The earliest date is on March 22 which happened in 1818 and will not happen again until 2285.