A Quick Snow Melt This Spring

April has been a record warm month here in the lowlands; as of tonight it’s the warmest April on record in Portland.  That, plus a warm end to March, means the snowpack is melting earlier/faster than normal again this spring.  Take a look at the numbers from the SNOTEL sites operated by the NRCS: 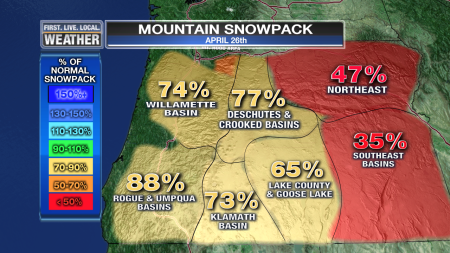 The faster melt means reservoirs fill quickly of course, but it also means less water in the streams in the late spring and early summer.  A warm/dry May would definitely cause a few issues, but even just a few weeks of cool/wet would be extremely helpful.  We’ll see how things go.  Speaking of snowpack, I love this pic sent in by an anonymous photographer: 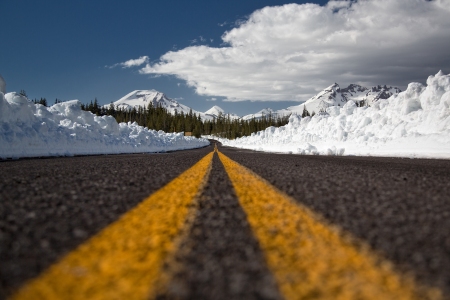 We have warm spell #3 of this spring coming up starting on Sunday.  You can see it on the GFS meteogram from this 00z run this evening:

Also note the very dry weather for late April and early May.  I love this chart that shows the last 3.5 days of GFS runs and their respective precipitation forecasts:

The latest run is on the bottom, from left to right.  The run 6 hours ago is the 2nd line up, and you continue back in time through previous runs as you go up.  Notice how dry the model is showing us for the next 10 days.  Almost time to start watering this year already!

The weekend is here and now it’s time to pay for those warm and dry April weekends so far.  It won’t be a total washout, but the 2nd half of Saturday and Sunday both should be cool and showery.

Again, it’s overdue after the bizarre warm temperatures early this week; and by the way, as of today April is the warmest on record here in Portland.

Snow levels in the Cascades fall Saturday night and I think we’ll see snow sticking down to just under 4,000′ Sunday and Monday mornings.  That’s pretty low for late April.

Stay warm and dry this weekend!

We’ve been expecting downpours tonight, but now a few thunderstorms have been showing up in the central/southern Willamette Valley as a wave of energy moves north over the region.  These showers/storms will continue their northward trek during the overnight hours.

As a result, we’ve put thunder back in the forecast: 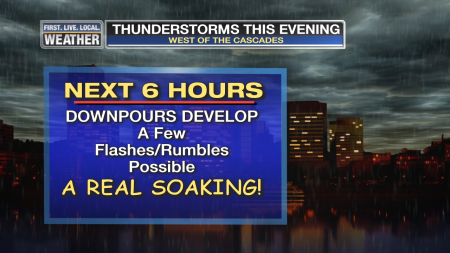 You can also check out the radar here:

For awhile things were getting exciting in the weather center with 3 different severe thunderstorm warnings for storms over the Cascades.  That was in the 4:30-6pm timeframe.  We saw large hail and then Hans Wipper from Skibowl sent us the best video of the day showing unusually large hail bringing traffic to a halt on U.S. 26 in the construction area west of Govy.

It appears the main lifting has moved north as we head towards 10pm.  So we are probably done with the storms, for sure if we don’t see something in the next 2 hours.  Here’s a chart showing all the cloud to ground strikes:

Everything was on the far east side of the metro area and then up into the Cascades.  Now I know almost everyone heard thunder and/or saw lightning strikes.  I know for a fact that our transmission tower was struck in the West Hills (engineer saw it), so it’s obvious lightning detection isn’t perfect.  Most likely there was plenty of cloud to cloud action too.  Hope you all enjoyed a little taste of the warm season.  We’ll have some short videos on our 10pm show as well.  Here’s a great pic from Happy Valley.  I love the play of the clouds obscuring Mt. Hood, the trees, the strike, and the scotch broom blooming.  Very nice.  Pic by Nathan Zaremskiy

Looks like the first thunderstorms of the day have popped up right over the Bend area at 2:30pm.  Expect lots more on the radar screen over the next 8 hours or so.   Models are all showing increasingly unstable atmosphere over NW Oregon and SW Washington between now and 8pm.  We’ve got that unstable atmosphere, some moisture moving north with an upper-level wave of energy (shortwave), plus a strong low-level push of marine air surging into the valley between 5-8pm.

I’ve seen better setups for thunder in our area, but this isn’t so bad…actually pretty decent for us.  Very similar setups have given us some nice thunder/lightning displays in the past.  Southeast flow aloft is always good, plus I’ve seen the marine push give a little added lift in the past as well.  That’s because it acts as a mini cold front plowing through the valley, pushing the warmer/unstable air up ahead of it.  Take a look at the WRF-GFS showing surface wind at 8pm.  Averaging SW 15-20 mph (that’s windy for a warm evening) running into the NW wind coming up the Columbia River.  I drew in the “convergence” area with the broad highlighter.  That convergence can sometimes work wonders too.

I’ve seen this in the past where storms bubble up right over that boundary.  Always fascinating to watch on radar of course.  The HRRR model is showing much of this nicely this afternoon.  Here’s the 7pm forecast from its latest run:

It also thinks there will be many dry areas.  Here’s the total precipitation outlook through early tomorrow (all of it this evening) from the last two hourly runs of that model:

Not exactly a widespread soaker tonight is it?  But for a few hours it could get real exciting just before/after sunset.

At this point there is no threat for severe weather in the lowlands.  By that I mean thunderstorm winds with gusts over 58mph or damaging hail.  Earlier SPC had put the Cascades in a MARGINAL threat for severe storms, but they have now removed that.

So how can you stay on top of the action this evening?

Why Can’t National Media Get A Weather Story Right?

It drives me nuts.  Why do the national media (the news networks) make up weather forecasts AFTER a major event?  It happened again today with the Houston flooding.  I ran across this in a news script in two of our shows (now corrected):

Waaaa??? was my first reaction.  I vaguely remember seeing something from some weather site way back late last week mentioning some flooding likely in Texas during the upcoming weekend.  So I just checked the Houston National Weather Service Facebook page.  Wow, after all of 30 seconds of work I found this posting from SATURDAY MORNING:

Sounds like if you live in that area there could be some flooding coming up for later Sunday or Monday?  Hmmm,  then another posting SUNDAY MORNING: 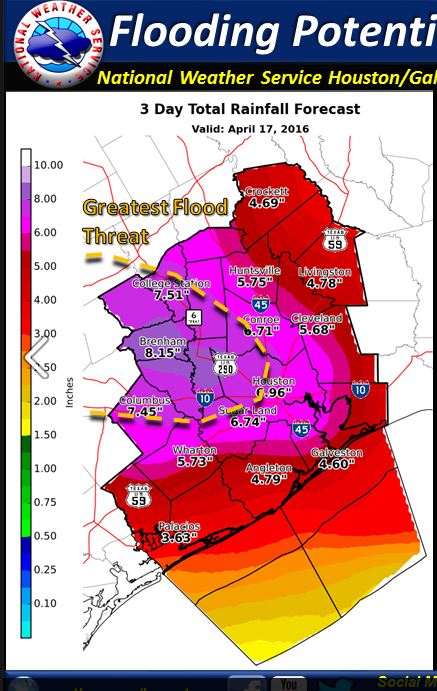 Quite a bit more detail.  At this point it appears the main action is forecast to hit Houston and areas to the west and north.  That’s EXACTLY WHAT HAPPENED WITHIN 18-24 HOURS OF THIS POSTING!

Folks, this has happened several times in the past year.  Remember the cruise ship (Anthem of the Seas) that sailed straight into the hurricane force winds earlier this year?  The company claimed, and then some media repeated that claim without checking, that the storm was unexpected.  It took  meteorologists speaking out to clue in the media that the company was wrong and either knew about the storm or failed to check the path vs. storm.

Back on February 2nd there was a tornado outbreak in the south.  Apparently one network began coverage with “WITHOUT WARNING”.  Ummm, the SPC had forecast the outbreak ahead of time and many warnings were issued ahead of the storms.

How does this happen?  How do reputable news organizations fail to check important facts and go on the air with an unsubstantiated claim?  Good question!  I don’t know.  It sure wouldn’t happen with other facts, but for some reason media seems to “wing it” with the weather information.  All a reporter has to do is check with their local National Weather Service office, or in the case of local tv stations, ask the weather anchor sitting on the other side of the office.  It’s not that hard.

We are very fortunate here at FOX12 that the news producers and reporters regularly call the weather folks to see if “that script looks okay” or “is there anything else I can add” or “I don’t want to get something wrong”.  I love working with the people here.  We DO get those national scripts that have mistakes like tonight, but we can often correct those in-house quickly.  So no complaints about my coworkers.

Now you might be wondering why Mark has his panties in a wad?  I care because time after time the implication is that “those forecasters were fooled again!”.  That’s annoying, because most big weather events are pretty well forecast compared to 23 years ago when I started.

Spring Getting Warmer? Not Yet, Except This Year!

Today was a, dare I say, historic April day for warm/hot temperatures inland.  Take a look at the spots that hit 90:

A bunch of official stations in the metro area were quite close: 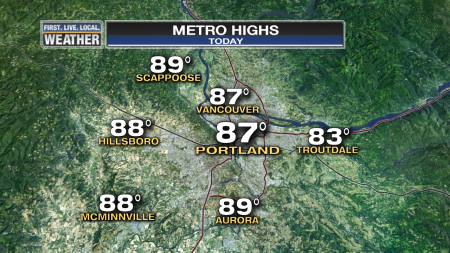 Easterly wind was a bit lighter today, but the atmosphere overhead was a little warmer too.  It all added up to an April scorcher.

As of this moment April 2016 is running warmer than the all-time warm April 2004 at PDX.  It remains to be seen if we keep that record for the next 11 days.  Very warm through Thursday, then cooler this weekend and early next week…we’ll see how that turns out.

Why so warm this month?  Today was the 4th day at/above 80 in Portland and we’ve never had more than 5 at PDX so it’s likely we’ll see more 80s than in every previous year.  We’ve had two episodes of strong upper-level ridging overhead.  Nothing too strange meteorologically, but each one has been at the upper end of what we can get this time of year.  Combine those two events and we get all the warm/hot days.

Has it happened in the past or is it all global warming/climate change?  (that 2nd term drives me nuts even though I get the reasoning for its use).  It HAS occurred, but only once in the old Downtown records that go back into the late 1800s. 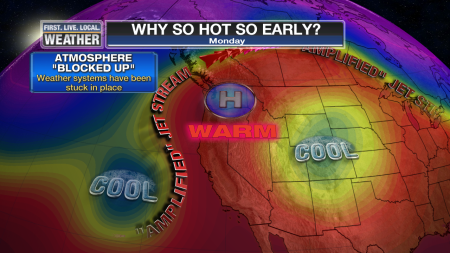 I just checked the entire NCDC Oregon Climate Zone #2 (western valleys) for April; this average ALL climate stations in the lower elevations westside.  Sure enough, you see April 1926 and April 1935 were both way warmer than the PDX record April in 2004: 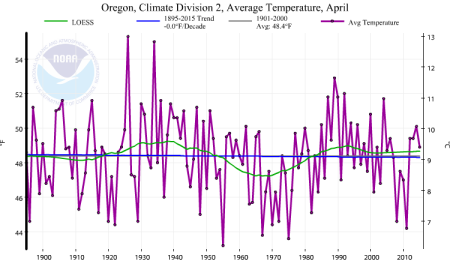 So, is this directly related to the climate warming?  In this case it could be, but you definitely can’t say our “springs are getting warmer”.  Notice from 1990 through about 2010 on average our springs were COOLING.  Note the warming from 1970 to 1990 too.  Definitely some cyclical action going on there.  It’s totally fair to say:

IN THE LOWER ELEVATIONS OF WESTERN OREGON THERE IS LITTLE OR NO WARMING SIGNAL YET FOR THE SPRING SEASON, BUT THE PAST 3 YEARS HAVE BEEN WARMER THAN NORMAL.  That’s the 3 month period from March-May.  Here’s the graph for those 3 months:

That said, it is NOT the case for the other seasons.  We all know summers in our area are warming after the past few years don’t we?

And the fall season too…warming:

Winter…same thing, the last two have been near (or at) the top of the chart: 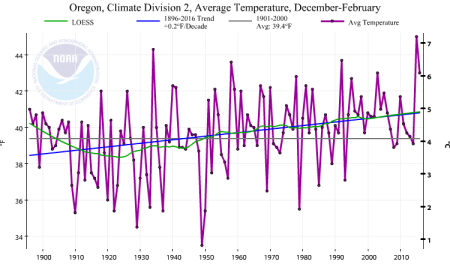 So there you have it…

Looking ahead, it appears to stay relatively mild as we finish up April and early May.  The ECMWF monthly run showed normal to above normal temperatures continuing over the Pacific Northwest.  Here are the 4 500mb height anomaly maps for each of the next 4 weeks, not much different than the last run:

So no sign of a long period of below normal temps; the warm spring of 2016 will continue…