Models have been advertising an incredibly warm airmass (for January) for this weekend and early next week over the Pacific Northwest.  It’s a strong upper-level ridge building right over the top of us.  This is what I expect at the Coast and in the Cascades for the weekend: 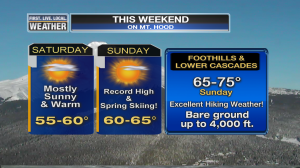 Hard to believe isn’t it?

The ECMWF model is forecasting 850mb temps (around 5,000′ elevation) around +17 to +18 deg C over the northern Willamette Valley Sunday afternoon/evening.  The warmest ever recorded was during the big Gorge windstorm around January 18, 2009.  During that mega-inversion, the temperature reached the January record +18.8 degrees over Salem during the balloon sounding.  That day the temperature was around 70 degrees at 3,000′ (the free-air atmosphere temp!) while temps were in the 30s/40s at the surface in the valley.  By the way, a +18 May-August would give us a high temp near 90 in Portland!  So you can see what effect the long nights, weak winter sun, and cold land has on that.

Forecasting high temps at the Coast and above 1,500′ is somewhat easy in this pattern.  The REALLY tough forecast is in the lowest elevations.  We have pretty much no wind movement in our area through Monday.  The east wind has died to just about nothing this evening and we only get a light southerly drift up the valley the next 12 hours, then it goes calm.

I’m forecasting 58, 53, & 50 for high temps the next 3 days at PDX.  Why would temps make a big jump tomorrow and then a big drop even when it’s warming dramatically above?   My theory is that the mid-level clouds over us tonight will hold through the night.  All models show much of the cloud cover shifting north during the day tomorrow for partly cloudy conditions.  I think the increased sunshine plus the light southerly drift should allow us to rise well into the 50s.

The issue comes tomorrow night.  I’m assuming skies are mainly clear Saturday night.  We have a very moist airmass, no wind, and dewpoints near 50 degrees.  That says widespread fog overnight and into Sunday morning.  With no wind to bring in drier air to clear us out, plus incredibly warm temps above putting a “lid” on the cool air, I think it’s likely we’re stuck in low clouds and/or fog much of Sunday.  Probably Monday and maybe Tuesday as well.  If this actually occurs, we’ll probably be even cooler than my high temp forecast.

The warmest January temp on record at Government Camp is 65.  We’ll be close on Sunday.  In 1968 when we hit that temperature it was 15.3 degrees over Salem on the sounding.

This entry was posted on Friday, January 23rd, 2015 at 9:37 pm and is filed under Weather. You can follow any responses to this entry through the RSS 2.0 feed. Both comments and pings are currently closed.