Another run of the ECMWF out to a month.  4 maps, one for each of the next 4 weeks showing average 500mb heights and anomaly.

Week 1:  We already know what it’s going to show, ridging in general this week and then a stronger ridge this weekend.  No surprise.  This finishes off January…geez, what a dull month.

Week 2:  Ridge is pushed to the east a bit.  What you don’t see is a wetter pattern during this period.  Several slightly cooler troughs/weather systems move through.  The ECMWF is actually pretty wet during this period and the operational shows cold enough temps around the 2nd-4th for mountain snow.  This could be helpful for Timberline and Meadows, but probably not enough snow low enough to get the other ski areas re-opened. 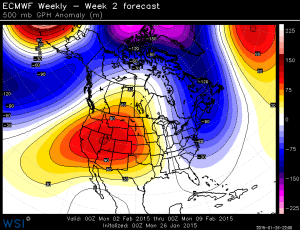 Week 3:  Wow, ridge pops back over us.  The operational run had a mammoth upper-level high right over us for Valentine’s weekend, just like what we went through this weekend.

Week 4:  Ridging is there, but a little weaker.  Still, the pattern is amazingly persistent.  Notice the deep trough way out in the Pacific doesn’t go anywhere in the entire month!  This takes us to within a week of March.  The operational run (not the ensemble average) had a shot of cold air right around the 16th-17th.  It’s interesting that the operational run one week ago showed something similar at the same time.

The takeaway thoughts are the same as the last run on Thursday and last Monday.