Forget about the fog, wind is the weather story in the metro area this evening!  Easterly pressure gradients have jumped much higher than models forecast, currently approaching 10 millibars from Troutdale to The Dalles.  Combine that with the very shallow inversion over us and the easterly flow of wind is being squeezed down to a very small area at the west end of the Columbia River Gorge.  That means very high wind speeds.  Vista House gusted to 91 mph after 5pm, which is only one mph lower than the highest I’ve seen there the past 3 winters.  It’s safe to say it’s gusting over 110 mph on those special “Steve Pierce/Keely Chalmers”  steps.  Corbett has been gusting around 70 mph too.  It’ll continue all night out there.

Over the past few hours the wind has been spreading farther west across the metro area.  We’ve gone from calm to gusting 25-30 mph on our brand new FOX12 weather sensor on the roof on the west side of town along US 26.  I see gusts 30-35 mph at Sunset Transit Center and I205/Division too.  Winds should peak overnight or tomorrow morning and then gradually drop off all areas the rest of tomorrow through Saturday.

Let’s talk snowpack…the warm temperatures have slowly taken their toll on the snowpack the past 4 days.  As I’ve mentioned in the past, the weak sun angle and short days of January mean even 55 degree days don’t melt much snow up there.  Warm rain is far worse.  Of course 55 degrees in March or April up there will melt the snow more efficiently.  Regardless, the ski areas that have been skiing on just a few Christmas storms have now closed.  Mt. Hood Skibowl announced today that they are suspending lift operations until new snow falls…from their Facebook page:

Willamette Pass and Mt. Ashland ski areas have closed as well.  There is still 33″ and 44″ at Meadows and Timberline.  That along with modern grooming techniques is enough to allow for lots of skiing, but it’s hard to believe we’re sitting here a year later and once again we are in this position (a terrible snowpack).  Right now most of the Cascades only have about 30% of normal snowpack: 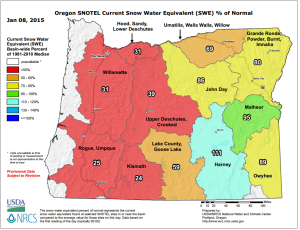 Pretty bad eh?  Not quite as bad as last year, but close.

What’s ahead?  Little or no snow in the Cascades for the next week.  But likely a change late next week.  This has been hinted at by models for a few days now.  Notice the ECMWF showing precipitation arriving next Thursday:

Will it be snow or rain in the mountains?  Check out the ECMWF 850mb ensemble chart from this morning’s run: 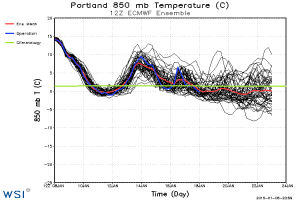 Consider pass-elevation snow to be right around the “zero” line.  Looking at the chart, that means we get rid of the very warm air overhead and drop to more normal 4,000-5,000′ snow levels during that wet period.  Note that not all ensemble members are in agreement, but in general it looks cool enough to drop some decent snow in the mountains just in time for the MLK 3 day weekend.

Farther ahead?  The monthly run of the ECMWF was last night and here are the 4 weekly charts: 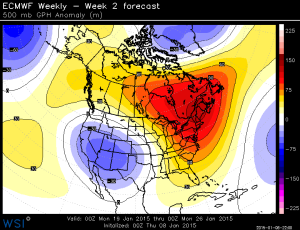 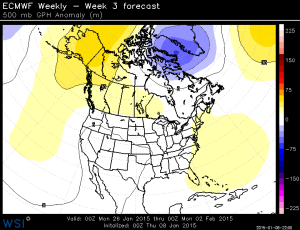 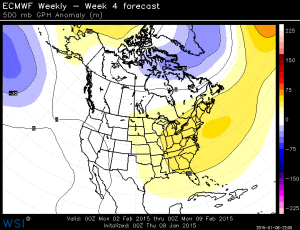 It doesn’t look like the wet pattern starting a week from now sticks around for more than a week.  Notice the following two weeks show ridging just to our north or northwest; similar to what we’ve seen this winter so far.  That last week is interesting in that it doesn’t show any significant ridging nearby.