We are suffering through the longest heat wave we’ve seen in at least 75 years west of the Cascades.  Does it live up to the title billing of THE GREAT 2015 NORTHWEST HEAT WAVE?  I feel that’s definitely a YES in the lower elevations of SW Washington and NW Oregon.  Likely it’s the same in many other locations as well.

I had a lot of free time this evening since it’s a Sunday and we only have one show at 10pm.  So I took an hour and looked over past records for the Portland area.

* Note I’m calling this a heat wave (singular) because of the duration.  We only ended up with one day down at 85 degrees.  Looking back I’m quite confident we’ll look at it as one long event.

Note that we PROBABLY have 4 more days in the 90s before the well-advertised cooldown at the end of the week.

Assuming we stay above 90 degrees as forecast, by Thursday evening it should look like this: 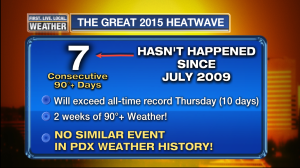 I have looked all the way back to 1940 in airport weather records (official observations) and can not find a similar duration of hot days; or anything close to it!  Now add the fact that warm overnight lows have been breaking records right and left (6 tied or broken so far).  This is a truly historic hot weather event for our area.  Not the hottest heat wave we’ve seen, but the longest.

By the way, you may be thinking of some other heat waves.  Wondering if I missed your favorite?  Here are 2 others that were quite impressive.

Have you noticed one thing has been missing?  No 100 degree days (in Portland).  In fact we haven’t been above 97 which is very strange for such a long period of hot weather.  This is the 2nd summer (so far) in which we are not seeing sharp thermal low pressure troughs develop west of the Cascades; sending a hot east wind down into the valleys.  That’s when we go above 100 degrees.  Those are often followed by a dramatic cool down as well.  Interesting that we’ve had upper-level highs consistently over us for a hot atmosphere both years, but very little amplitude to the flow to give us brief offshore flow.  We’ve been doing much of this heat with weak-moderate onshore flow.

So you’re sick of the hot weather and wanting a cooldown right?  I think most of us are. We definitely have one for next weekend, but it remains to be seen if it’s just a brief cooldown and hot weather returns the 2nd half of the month.

This entry was posted on Sunday, July 5th, 2015 at 9:04 pm and is filed under Weather. You can follow any responses to this entry through the RSS 2.0 feed. Both comments and pings are currently closed.