Hottest Day of 2015, But Big Cooldown On The Models

Today was the hottest of the year here in Portland; we hit 97 degrees

All of the metro area was in the upper 90s, with McMinnville (and possibly Salem) hitting 100 degrees.

If you hate the heat, you’ll want to stay hidden in a cave or underground bunker for a few more days.  I don’t see any significant drop in temperatures until after Monday

But notice the last bullet point on the graphic!  Over the past two days models have been giving us major hints that something is going to change as we head into mid-July.

The hot weather has been caused by persistent upper-level high pressure over the Western USA.  There is a slightly change for the middle of next week when the ridge splits into an offshore part and the rest retreats farther east of us.  That should give us more marine influence and a better chance of high temps dropping down into the 80s.

Beyond that, there is a common theme across all models today showing an upper-level trough developing near the West Coast in the middle of the month.  Take a look at the ensemble average 500 millibar heights for 16 days from now.  From the GFS, the GEM, & ECMWF. 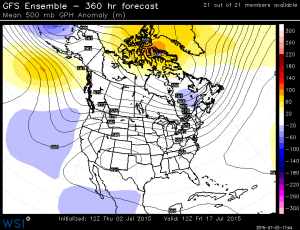 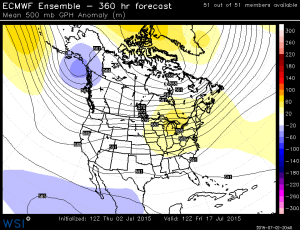 They all look quite similar don’t they?  The show the ridge weakening and shoving much farther west out over the mid-Pacific.

This should lead to normal to below average temperatures.  Wow, that will be the first time we’ve seen that in about 5 weeks.

Here is the 12z ECMWF ensemble chart showing pretty good ensemble agreement on the cool down.  850mb temps come down right to average NEXT weekend (not this coming weekend) and stay there.

Last night’s monthly run of the ECMWF was similar, showing warm to hot first week, then big change during week 2: 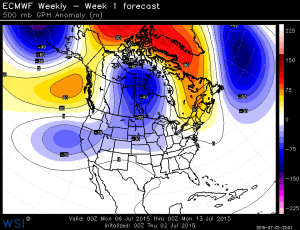 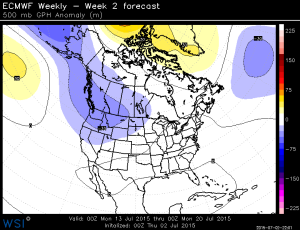 We sure haven’t seen a below average deviation like that on the monthly run for quite a while.  Here is week 3 and week 4: 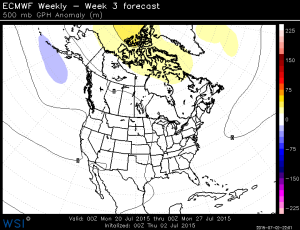 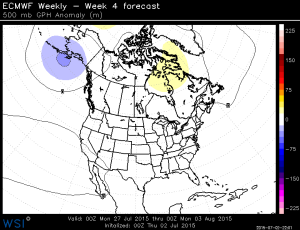 It’s interesting that any sort of significant ridging is totally absent anywhere on the map in late July and early August.  Taking a closer look at maps from WeatherBell it looks a bit different.  Apparently WSI’s contouring is a bit more coarse.  Heights are indeed above average during both of these weekly periods; just not dramatically so.  My gut feeling based on the info above is that we’ll have a below-normal period in mid July, then return back to normal conditions the latter part of the month.  Regardless, it’s also interesting that in the coming 1-2 weeks we’ll see temperatures go DOWNHILL instead of UP.  The old saying “summer doesn’t begin until after the 4th of July” is going to be wrong this year!