Back to Normal This Week; Possibly Colder NEXT Week

Here we are, finally at the end of Christmas Vacation for the kids.  It’s been a fun two weeks for many of us; full of family events, parties, and WAY too much eating and…drinks.  Time to get back to work and school.  First, a quick recap of where we stand meteorologically:

Now we seem to be turning a corner, at least for the next 10 days.  We’re now in a cooler & wetter weather pattern; back to normal!

Expect 2 to 5 feet of snow in the Cascades now through next Sunday. Here’s the ECMWF model (Euro).  Can’t wait to see that 25% of normal snowfall on Mt. Hood jump up big-time the next 10 days! 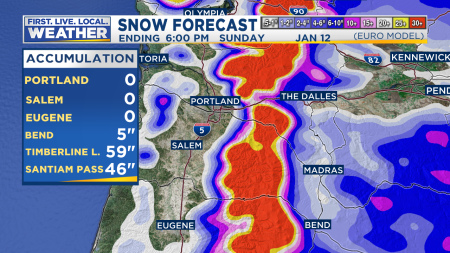 But by next Monday, ALL models agree we’re in a pattern with an upper-level high out around 150-160W longitude (south of Alaska) and a cold trough centered over the western USA.  This is the ECMWF for next Monday 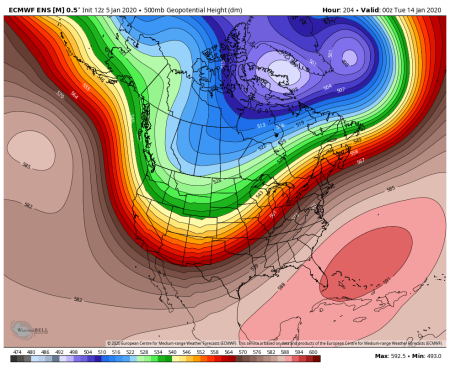 The Canadian and GFS are similar.  Click on each for a larger view. 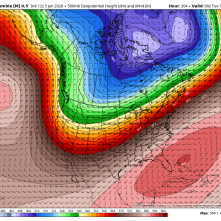 So that’s relatively simple…cooler (or colder) and still a bit wet 8 days from now.  But in our climate, with hundreds of miles of 50 degree water just to our west, everything has to work just right to get us real cold or snow all the way down to sea level.  So all models may agree on the general pattern by next Monday, but how we get to that point and exactly how all the weather features line up is critical.  Slight changes mean the difference between a hellish snowy commute at some point in Portland, or just 40 degree rainy weather.

Example A:  For several days the (new and improved) GFS model has been constantly trying to dig weather systems farther west out of Canada as they move southeast into the cool trough across the western USA.  That’s for this coming Saturday, Sunday, or Monday.  It has been most aggressive bringing cold arctic air south into the Pacific Northwest.  Today’s 18z model was very extreme, going all out for widespread snow in our area with a cold east wind Sunday night.  See the arctic boundary (snow to sea level) way down into Oregon on that model (yellow highlighting)

The GEM at the same time has a surface low sliding into NW Washington, keeping cold air bottled up north.  On Sunday evening the GEM would say it’s 40 degrees with a gusty south wind blowing in Portland…totally different even though upper-level is similar.  It’s all about low/high pressure locations for us. 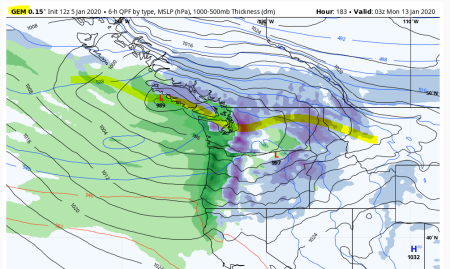 The ECMWF?  It says “mainly dry” with the arctic boundary up north and a weaker low heading farther south.  This says snow showers to 1,500′ and nothing interesting happening in Portland Sunday evening.