Real Winter Weather Likely On The Way West of the Cascades

So far this winter we’ve seen very mild conditions, no lowland snow in Portland, and hardly any storminess.

Now it seems increasingly likely that SOMETHING is in the works along the I-5 corridor for next week.   Some sort of snow/ice/cold “event” may be on the way. Maybe even out to portions of the coastline.

It’s still too far out (5-7 days) to know how things will play out in detail, but now that we’re getting closer it’s fair to make these statements:

At this point, we are not able to make statements like this:

“ I expect a, (6″? 8″? 10″?)  snowfall over the Portland metro area next Wednesday, or Thursday” or “I expect a snowstorm in late January or February” 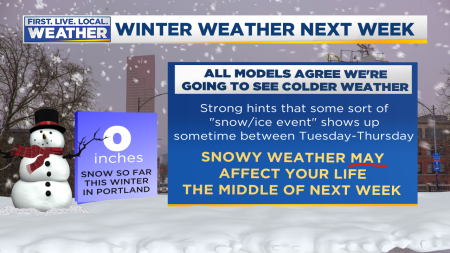 WHAT ARE WE SEEING RIGHT NOW?

All models are in good agreement forecasting the general weather pattern for the next 7 days.  They all agree that a series of systems drop into the Pacific Northwest on cool northwesterly flow through Sunday.   That’s valley rain and mountain snow.  Expect a MAJOR snow storm on Mt. Hood Friday night and Saturday, then again Saturday night and Sunday.  First big weekend on Mt. Hood with all resorts fully open (Skibowl opens tomorrow) + 1-2 feet snow + tons of traffic = big mess possible Hwy 26 & 35 Saturday/Sunday.  Friday afternoon through Sunday evening should feature 2-4 feet of snow up there… 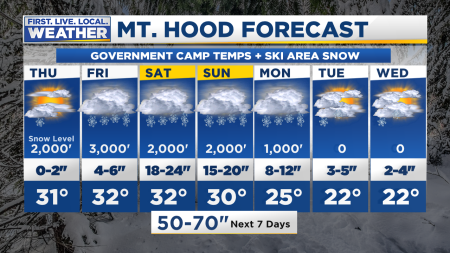 Then next Tuesday… 6 days from now.  Models generally agree to this point

Notice that very cold low is sitting up there in southern British Columbia.  When we get our big arctic blasts, a low like that drops directly overhead on its way south and east.  No model is forecasting that to happen early-mid next week. That’s what happened Thanksgiving weekend, but of course the airmass was not nearly so cold early in the season.  In this setup, which models agree on up to this point, we generally see cold “onshore flow” showers.  Wind at sea level is coming in from the southwest or west, off the 50 degree ocean.  In this case the air is taking a very short trajectory from western Canada out over the cold water and coming onshore as snow showers.  This is the classic setup for lots of snow on hilltops and a slush mix in the lowest elevations.  If you live at 1,000′ this can give you big snow.  But this isn’t how we get our big “Portland shuts down” sort of snow events.  That’s why we have mixed snow/rain showers in Monday’s forecast and then mainly flurries for Tuesday.

2 of 3 main long-range models (GEM & ECMWF) say we still have weak onshore flow (although very cold onshore flow!) Tuesday.  Bitterly cold arctic air is poised just north of us at that point.  Of course the crazy GFS is still blasting in cold air Tuesday, but at least it has been backing off on that time-wise. A couple days ago it has the “arctic front” (leading edge of cold north & east wind) coming through late Sunday.  Now it’s doing that Tuesday.  It’s been unreliable for the really cold stuff so far in this event.  So at this point the most likely scenario is that we’re going to be flirting with low elevation snow Monday/Tuesday, but the showery/slushy stuff; no frozen/hellish commute issues.  You get the idea with the ECMWF snowfall forecast through Tuesday: 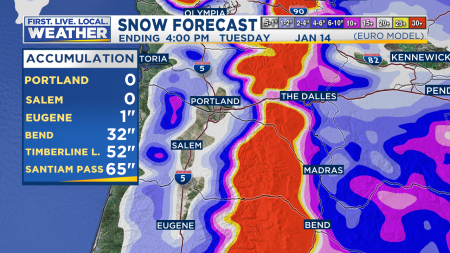 Beyond Tuesday?  Of course we’re talking 7 days out in time, but models are hinting we could see a classic snow/ice storm setup somewhere west of the Cascades.  ALL models agree that an approaching system from the west will pull cold/dry arctic air south & west from Washington and through the Gorge.  Then moisture rides over that cold air…a classic!  But will it be a relatively brief snow/ice event after Tuesday or a historic drawn-out snow storm?  It’s too far out in time and both are possible.  Luckily we have many days to figure it out.  The reason I have confidence that we’re going to see at least SOMETHING is the ensembles from the different models.  43 of 51 ECMWF ensemble members show at least 2″ snow around Wilsonville (I chose a location along I-5 corridor) by next Friday.  You don’t often see such good agreement among the ensembles, clearly a spike around next Wednesday/Thursday. 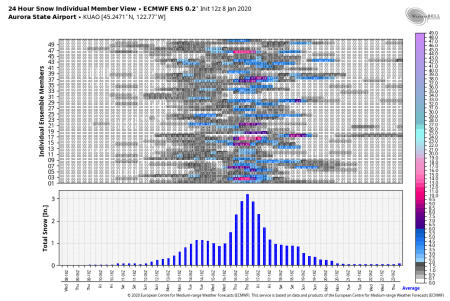