It sure felt like July today!  Here in Portland we started in the 50s and ended well into the 80s; a typical mid-summer day.  Except that it’s the 25th of April.  The result was several more record high temperatures, mainly in the metro area:

And we did that with extremely weak offshore flow.  Even in the Gorge the wind died down to a slight breeze plus downslope wind off the Cascades disappeared.   So it’s quite impressive from a meteorological standpoint we were able to make it into the mid 80s. Models absolutely nailed the atmosphere overhead.  850mb temps at Salem were 16.6 degrees on this afternoon’s balloon sounding. 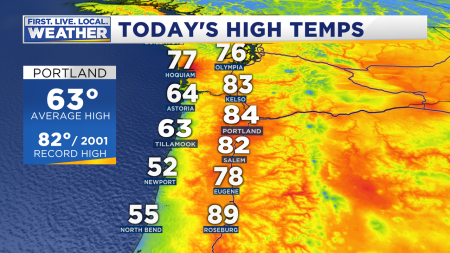 Check out the coastline…what a change!  Newport was 30 degrees colder today…that’s always a tough forecast right along the cold ocean/warm land interface (the beaches).  Notice the onshore flow didn’t make it up to Hoquiam; still well into the 70s there.

A very interesting setup with the thermal trough (warmest air) sitting from about Kelso to just east of Salem and Eugene.  That means west of that line onshore flow kicks in during the afternoon = cooler.  But from Kelso/Longview to the Portland metro area we get a light easterly flow once again as high pressure briefly strengthens east of the Cascades.  Result?  All models are adding 2-4 degrees to our highs tomorrow.  85-86 is likely throughout the Portland metro area.  You can see the bubble of warmer temperatures from Portland north on the GFS and the cooler temps to our south.  This is the 5pm Thursday forecast:

South of the metro area it should be the same or cooler.  I bet Eugene only reaches 70-75 tomorrow afternoon.

Regardless, expect a major push of cool ocean air tomorrow evening even in the metro area.  By Friday morning the marine layer is 5,000′ thick from the Cascade crest to the coastline.  We’re not going to see any sunshine Friday!