Four Days of “Summer” Ahead

What a nice run of weather the past 5 days…we’ve been in the 60s since Wednesday.  Several of those days have been warmer than forecast too!  I could do this for another week or so. 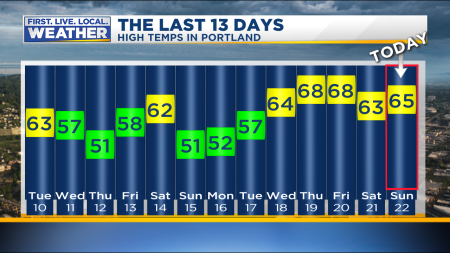 Instead we have a big jump in temperatures coming the next few days.  It’s going to feel like June & July Monday through Thursday this week.

What’s going on?  An unusually warm airmass will settle over us plus easterly flow develops at the same time.  Easterly wind in the warm season is a warming wind.  That’s because it’s keeping any cooling from the ocean away plus when it comes down the west slopes of the Cascades it warms heading downhill.   Take a look at the surface pressure forecast for 11am Monday from the WRF-GFS

You can see lower pressure (a thermal trough) centered right over western Oregon and then down into northern California.  High pressure has nosed into eastern OR/WA = easterly flow.  Then check out Tuesday 11am; the thermal trough is nicely established right on the Oregon Coast.  Gusty east or northeast wind will be blowing through the Gorge/Cascades/Coast Range at that time.  Anytime April through September, this is the warmest possible weather pattern for us.  80s in April, 100+ in mid-summer.

By Wednesday at 11am the airmass has reached its warmest, but the trough has moved generally into the interior of western OR/WA.  Likely not so warm on the central coast of Oregon this day:

How warm?  Models are all in excellent agreement that the 850mb temperature over Salem will reach around 11 tomorrow, 15 Tuesday, and 17 Wednesday PM.  Past situations like this push Portland’s high temperature into the 83-88 degree range; so I bumped up our 7-Day Forecast to 84-86-84 starting Tuesday.  I looked closely at April 2016, 2012, & 2004.  The ECMWF morning run had a secondary little push of easterly wind returning Thursday, but I’ve discounted that a bit for now.

In this pattern, as long as easterly wind makes it to the coastline, there’s no reason you can’t see the same temperature out there as here in the valleys.  As a result, high temperatures well into the 80s are likely at the beaches Tuesday, and possibly on the north coastline Wednesday too.

It’s interesting to note the past 7 years we’ve seen our first 80 degree temperature a bit “ahead of schedule”. 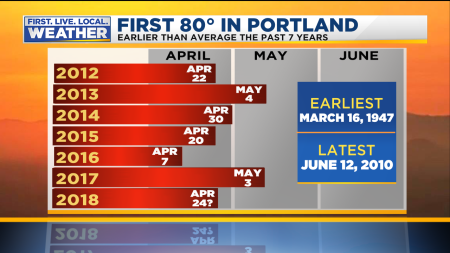 Most of us probably remember those two very chilly springs in 2010-2011.  Those two years we didn’t hit 80 until early June.

Alright, it’s dinnertime so I’m headed out.  Enjoy the warm weather because models are also in good agreement that at least some showers (and maybe thunderstorms) are coming at some point Friday or Friday night.  Almost all EPS (ECMWF) ensemble members show decent 24 hour precipitation totals by 5pm Saturday.  Maybe not a lot, but enough to ruin your freshly stained deck!  Get dry weather activities done by Thursday.