A Stormy Saturday Ahead

One year ago, on April 7th, the strongest April windstorm since the 1950s hit the valleys of NW Oregon and SW Washington.   Peak gusts looked like this across the metro area: 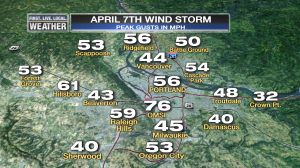 It was PGE’s biggest power outage event since the December 2006 storm and it took over 3 days to get the last few customers back online.  That said, most customers were back within 24 hours due to those hard-working crews.

So of course it’s VERY interesting that we have another wind “event” coming up exactly one year later…Saturday April 7th.  Luckily, this one does not appear as strong, but will likely cause some inconvenience for many of us during the daylight hours Saturday.

Just like all of our wind storms/events, a deep surface low pressure center will be tracking up the coastline Friday night and Saturday morning.  It ends up around 972-980 millibars depth somewhere around central/southern Vancouver Island Saturday afternoon.  Note the 2pm location from the WRF-GFS model.  Also see the tight packing of isobars, indicating large pressure change over relatively short distance.  The tightest packing is generally associated with the strongest wind as air rushes from high to low pressure.  Looks windy on the coast! 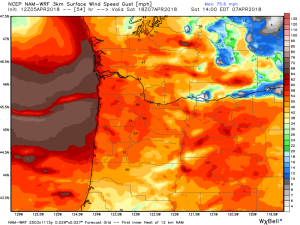 and the ECMWF, although it’s a bit weaker.

The WRF-GFS around 11am Saturday

We have a bunch of wind coming up this weekend, not a MAJOR storm, but pretty darn windy for April!