These first 10 days of October have been the coldest in Portland since the early 1970s!  Not only did we see a record low temperature of 33 in Portland this morning; but it was the earliest 33 degree reading since 1985!  Take a look at some of the lows around the metro area 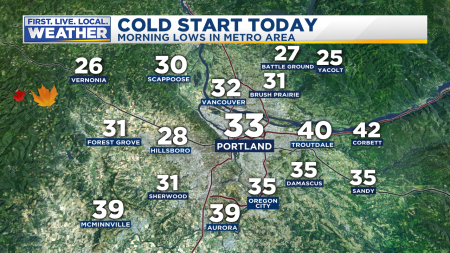 You’ll notice that some of us did not have a “first frost”.  Much of East Portland saw enough of an easterly breeze to keep temperatures up around 40 degrees.  A northerly breeze kept some Willamette Valley locations a bit on the “warm” side as well.  Now check out the frigid temps east of the Cascades…amazing for early October.  Single digits at Burns.

That 13 at La Grande is the coldest October temp in 13 years!  And it happened by the 10th of the month.  The last time Redmond was this cold (13) in the first half of October was 50 years ago!  Redmond has been all the way down to zero and even a little below in October, but it has always been in the last few days of the month.  This was a very rare event, and I think it’s VERY interesting that we’ve seen something similar occur twice now this fall.  The same weather setup a month from now would give us a blast of cold arctic air.

What’s ahead?  More of the same tomorrow, except a stronger east wind blowing through the west end of the Columbia River Gorge and east metro area.  Gusts have been in the 40-50 mph rage.  Expect those gusts to bump up to around 50-60 there tomorrow and 25-35 mph in east metro.  Of course we’ll see sunshine all day too.

Definitely a “meh” weekend ahead.  A very weak system dies overhead late Saturday and Sunday.  Lots of clouds but very little rain.  We lose the east wind Saturday.  At best we could see .10″ rainfall total by late Sunday.  Monday looks dry too.

There are strong hints that we’ll see our first soaking rain of October the 2nd half of next week.  See the ECMWF model forecast of 24 hour rainfall.  Each thin horizontal line is one of the 51 ensemble members on the top half.  The bottom half shows the average of all ensemble members.  Good agreement that next Wednesday-Saturday will be wet, maybe not excessively so, but back to normal.  Expect lots more cloud cover too.

All the more reason to enjoy this fantastic sunny/cool October weather.  Have a great weekend!

This entry was posted on Thursday, October 10th, 2019 at 8:58 pm and is filed under Weather. You can follow any responses to this entry through the RSS 2.0 feed. Both comments and pings are currently closed.

30 Responses to Coldest October Start in Almost 50 Years; But Mainly Dry Weekend Ahead