I can’t find any rain for the FOX12 viewing area in the next week.  And almost EVERY DAY will be sunny.  But hang on, there’s a big catch; Monday night & Tuesday will be very windy and chilly for the entire metro area.  In some parts of the Pacific Northwest this will be a historic cold snap for so early in the cold season.

First, today was a fantastic late October day; brief spots of fog and then all sunshine.  High temps right around 60 are normal for this date.  Although the low of 33 was much cooler than average 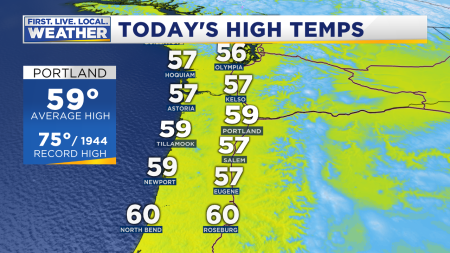 October continues to be the coldest in Portland since 1969.

I was 6 months old last time we saw an October this chilly in Portland…let that sink in.  And now it appears the last three days of the month (not tomorrow) will be unusually cold for late October, especially east of the Cascades.  In fact the airmass coming out of Canada will be the coldest we’ve seen around Halloween since 2003!

Where is this coming from?  Northern Canada, way up in Northwest Territories.

By Tuesday morning, that lobe of a cold upper-level low over Canada will be right over Idaho

How cold?  850 millibar temps on Tuesday morning are forecast down to around -12 over Spokane.  So around 4,000′ elevation it should be about 10-12 degrees F!  That same airmass pushes up against east slopes of the Cascades.  That means Timberline Lodge and Mt. Hood Meadows, plus the upper parts of Skibowl will be somewhere between 10-15 degrees Tuesday morning and struggle to get above 20 by afternoon!  That’s midwinter cold.  Speaking of records, Spokane has not seen anything colder than -12 (at 850mb) before November 10th, so this is the earliest it gets there.  At Boise, the sounding each day has never been lower than -8 (at 850mb) before November 12th.  Models are forecasting around -11 Tuesday morning there, a full two weeks earlier then the previous record!  So this is historic cold over the inland Northwest and Rockies.

Notice we are right on the edge of the cold air, so the main effect will be strong east wind for one day (Tuesday) all areas and then a continuing east wind Wednesday closer to the Gorge as upper-level temps warm dramatically through Thursday.  Dewpoints will be dropping below 10 degrees west of the Cascades.  Think dry desert air that cools quickly at night.  Calm areas that get up around 50 during the day will drop into the low-mid 20s Wednesday morning.  I think the coldest spots west of the Cascades will be in the 16-20 range at some point Wednesday-Friday mornings. 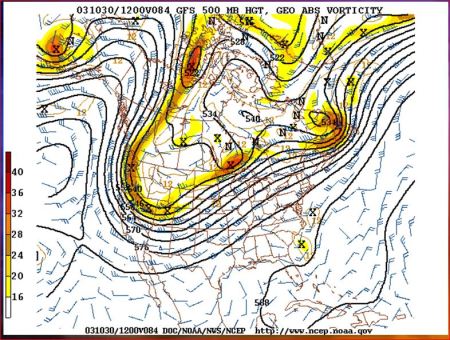 The trough was a little farther west and stayed over us longer compared to what is forecast this week.  PDX saw five days with highs below 50 degrees starting on Halloween that year.  We ended up with a low of 26 from that cold spell.

Then one year previous (late October 2002) a similar setup brought record cold to our region.  I have it in my notes that it was the “coldest airmass of the season”.  That was a very mild winter, but I’m not sure if I was referring to the general setup or if it really was the coldest airmass to come south.  Regardless, look at those low temps on this slide I presented at a winter weather recap the following year: 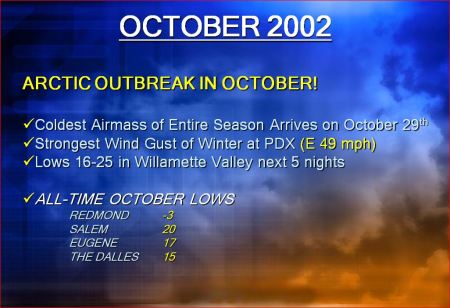 That 2002 event was more like this one; cold air comes in quickly and leaves quickly in a couple days.  Notice it set October lows for several stations.  In Portland we’ll have to drop to 25 to set a new October low.  There’s no reason that couldn’t happen if wind goes calm at PDX at some point Wednesday night.  We’ll see.

Enjoy the sunshine Monday, but be ready for a big chill and lots of flying leaves Tuesday!