Here it is, the Thursday evening before Memorial Day Weekend and it looks like summer on the weather maps.   Now each year I like to point out that the traditional “start of summer” weekend is generally nothing like summer in our area.  Our AVERAGE high this time of year is 70 in Portland; that’s the same as early October!  And the chance of getting showers on at least one of those 3 days is relatively high.

Oh, but this year is TOTALLY different.  We’ve seen an unusual late May warm & dry spell.  8 days dry so far with 6 more to go (through Wednesday). 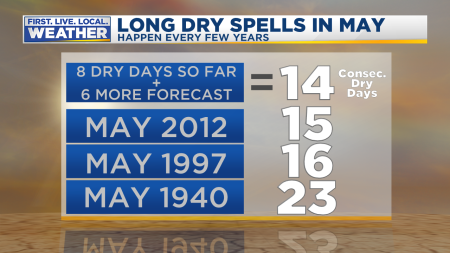 Who would have thought we’d see 14 consecutive dry days!  By the way, the longest dry spell WITHIN the month of May WAS that 23 day period in 1940 on the graphic.

After a cool upper-level trough passed through yesterday, an upper-level ridge has now begun to rebuild over the West Coast.  Upper-level heights rise and the atmosphere warms through Monday.  That means warmer temps each day.  You can see the maximum strength of the ridge on Memorial Day from the ECMWF model:

Then beyond that time the ridge breaks down and we finally get a showery pattern (maybe for just a few days…unsure) beginning next Thursday.

WHAT DOES THIS MEAN FOR MEMORIAL DAY WEEKEND?

It means we’ll see a historic weekend, most likely one of the warmest or THE warmest on record.  I have only checked records back to 1987 (ran out of time), but this will be the warmest/driest in those 30 years.  In fact we haven’t even hit 80 degrees in 22 years during this holiday weekend!  With 850mb temps up around +16 to +20 Saturday through Monday, weak onshore to weak offshore flow should allow temperatures to rise up to around 90 degrees.  Warmest days appear to be Sunday and Monday.

I do see cooling next week with our 1st chance for showers in 2 weeks coming up next Thursday.   The verdict is still out on whether this will be a brief downturn followed by more ridging the following weekend or a return to a longer period of cool showers.   There is a huge amount of “noise” in the ensemble forecasts beyond that point

Note the big dropoff in temps the middle of next week, but more important is the big spread in solutions from next Thursday through the following week.  One thing we can glean from this is that IN GENERAL it appears that temperatures remain near or above normal…there isn’t much support for a long cold spell.   The 10 day ECMWF operational run for rainfall is still pretty weak through the first weekend of Rose Festival:

So enjoy the summer-like weather this weekend and try to stay cool if you are indoors.  At least relative humidity will be low through the weekend.