March Offers a S-L-O-W Start To The Meteorologists

Putting that fork in winter was definitely the right thing to do two weeks back.  We have slipped back into a weather pattern similar to December with weather weather systems occasionally sliding into the Pacific Northwest.  Precipitation has been well below average across almost the entire western USA the past two weeks.  Portland has only seen .27″ in those two weeks!

February ended with near normal temps for us…nothing unusual there.  We’ve had a ridge of high pressure over us or just to our west the past couple of days.  Some nice weather has been the result!  By tomorrow that ridge is moving east and you can see a cold upper-level trough approaching.  This is the 500mb GEM (Canadian) ensemble average.  That’s the average of 21 difference ensemble members.

One would think we have a cold/showery few days ahead (beyond tomorrow) with lots of mountain snow.  But all models show that trough splitting/stretching as it moves over the Western USA.  By Sunday a cold trough is well west of California and what’s left is moving over the Pacific Northwest. 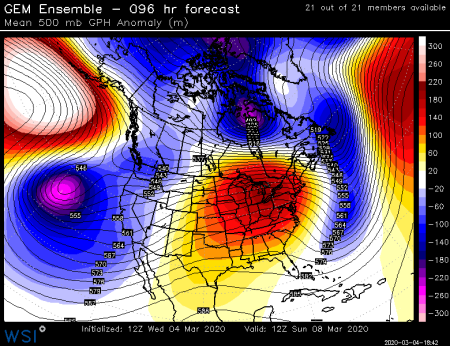 That splitting means we get a weak cold front tomorrow night, then a few light showers Friday and Saturday.  Even though snow levels plummet down below 2,000′ by Saturday, there just isn’t much moisture to go around.  Expect only a few inches of snow in the Cascades and higher parts of the Coast range.  Yes, more slow weather.  Although on the bright side we MIGHT see some convection (brief heavy showers) Saturday…maybe.

That cold trough shifts east early next week, likely leaving us with mainly dry weather Sunday through Wednesday.  The same GEM ensembles for Wednesday the 11th

This gives us some pleasant, but not overly warm early/mid March weather.  All models then are in pretty good agreement another cold troughing “episode” shows up in about 10 days…the following weekend.  Saturday the 14th: 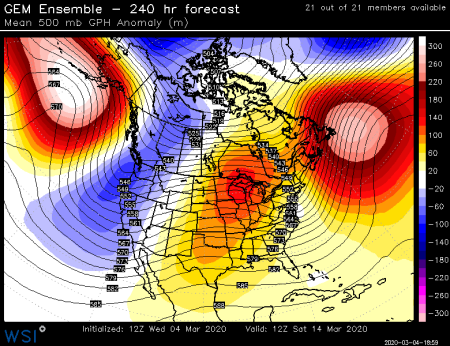 Notice with ridging now, plus the first half of next week, that rainfall will remain below normal through the next 7-9 days.  The ensemble average rainfall from the ECMWF shows a half inch or so for the next week, and less than 2″ in the next two weeks.  That’s a bit drier than average, although clearly looking wetter that 2nd week.  The big story here is that I don’t see a long wet period ahead. 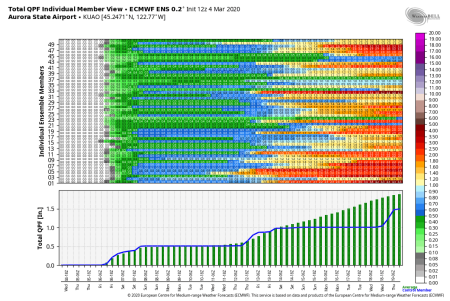 Temperatures will remain near (or even a bit below) average for early-mid March.  There’s no sign of a real intrusion of cold air in the ensemble averages.  But I don’t see any models going for extra-warm upper-level ridging either.  That means no 65-75 degree weather; which can happen this time of year.

By the way, are still hoping for snow?  I’m sayin’ there’s a chance!

Remember late March 2012?  A stalled front dropped steady/heavy precipitation right over the Willamette Valley.  4-6″ fell in the central/south Willamette Valley and even a few inches fell in the hilly areas around the metro area.  But measurable snow at the lowest elevations west of the Cascades in March IS rare.  Last year was exceptionally cold the first 10 days of the month.  That was mainly due to extensive snow cover left to our north and east from the record cold February.

More likely is a temperature getting close to 70 at some point this month!