It Finally Snowed In Portland; In March

It’s very nice to see the snow forecast turn out as close to perfect as it can get.  That’s rare.  Last night (see previous post) we forecast Zero to 2″ in the western valleys.  We expected little impact on lowest elevation roadways plus snow showers continuing through the day as temps rise to around 40 degrees or so. That’s pretty much what happened.  It appears most areas saw at least a dusting, and a few spots even in the lower elevations up in Clark County picked up 3″.  Areas around 1,000′ or so have see up to 4-5″.  Temps at 2pm…higher as sunbreaks pass over, lower under snow showers. 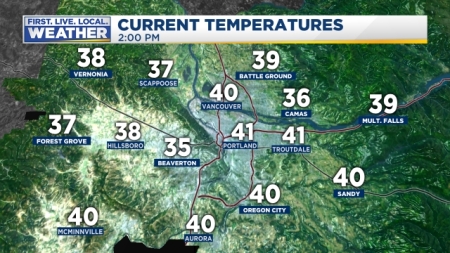 Sure enough, a steady band of snowfall developed after midnight and temperatures dropped close to freezing, bringing sticking snow down to the valley floor in many spots.

Are you ready for the GRAND OFFICIAL TOTAL IN PORTLAND???

Are you thinking March snow (even a little) doesn’t seem too unusual lately?  It isn’t.  Actually through the first 10-15 years of my career it was pretty much a no-show.  We’ve only seen measurable snow in March 6 times in the past 50 years!  Only once in the 30 years from mid-70s to mid-2000s.  Now we’ve seen it three times in 10 years. 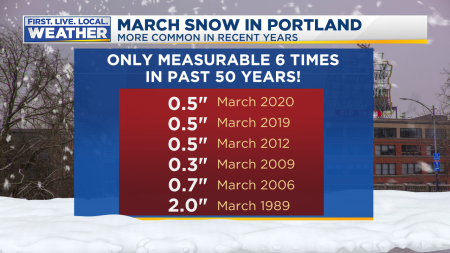 Today’s snowfall also ties for the 4th latest on record in Portland.  Official records go back to 1940 at PDX/NWS forecast office locations. 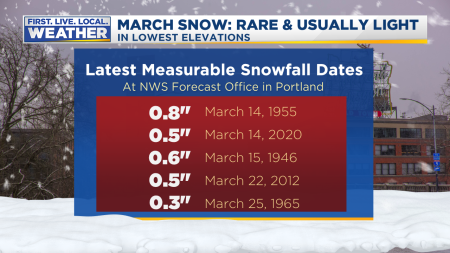 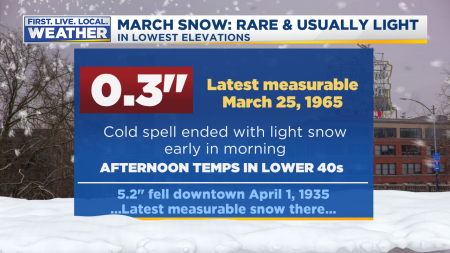 There had been some “later snow events” (one in 1968), but the NWS cleaned those up and decided they were hail and not snow.  And the old downtown records show an April 1st snow back in the 1930s.

We have LOTS of sunshine ahead, after a couple of cold nights.  I’ll be back at work tomorrow afternoon

This entry was posted on Saturday, March 14th, 2020 at 2:26 pm and is filed under Weather. You can follow any responses to this entry through the RSS 2.0 feed. Both comments and pings are currently closed.

15 Responses to It Finally Snowed In Portland; In March