Three Chilly Days Ahead; Plus Sticking Snow For Some of Us

Today has been another fantastic early spring day; sunshine with temperatures reaching into the 50s.  That will change tomorrow as a cold upper-level trough drops down along the West Coast.  The result is a wet & cool Friday.  In fact you may even see some snowflakes mixed in.  The sticking snow level will be around 2,000′ tomorrow.

Models have come into better agreement on what happens beyond.  A surface low lingers off the Oregon coastline through Saturday, pulling cool/cold Canadian air south into the Pacific Northwest.   At the same time lots of moisture in the form or snow/rain showers will be rotating around the upper-level trough overhead.   This is what I’m thinking for Saturday in the Portland metro area; some “conversational snow”.  I doubt any snow Saturday will affect your life.  Certainly far less than the current COVID-19 cancellations.

Saturday night and Sunday almost all the moisture pulls south and skies start to clear out.  By Monday/Tuesday we’re back into a nice spring weather pattern; sunshine with afternoon highs into the 50s or even 60.

Sure, models agree on the basic progression of weather the next 4-5 days.  But how much precipitation shows up?  And how much cold air comes in from the east?  Those are the big questions.    Trends the past 24-48 hours suggest less precipitation than earlier expected.  More obvious is models getting warmer and warmer as we approach this event.  2-3 days ago the GFS/ECMWF were at least down around -8 degC at 850mb (or much colder in the case of the GFS).  Now they both bottom out around -5 to -6!  Without cold air coming in from the east, that doesn’t produce lowland snow.

Some models have backed off on precipitation totals for Saturday.  The ECMWF was very wet last night but ensemble average shows less than 0.50″ now.  Of course if temperatures were below freezing from tomorrow night through Saturday afternoon that could produce 5″ of snow.  But that’s not happening.

All of our modeling shows very reasonable (for mid-March) temperatures between 36-42 degrees during the daytime Saturday.  That’s cold enough to see snow in the air, but definitely not any significant sticking.  Basically a non-event in the lowest elevations.  If you live up around 1,000′ and above, I think a Trace to 2″ is very likely at some point between Friday night and Sunday morning.  Still, even up there it’ll be tough to get any snow on roads during the day, it would only stick at night.

Put this all together and I feel the latest NAM-3KM is a pretty good representation of what to expect Saturday.  Some white on the hills, and maybe even briefly in the lowest elevations, but this likely ends up similar to our other 3 “close calls” this season 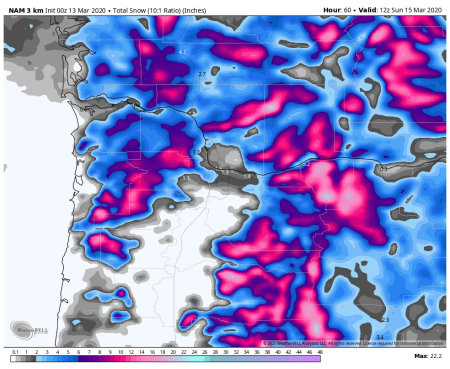 I know it’s a brief post, but as you can imagine it’s been a crazy day in the news business.  I’m off work Friday and Saturday, that’s my “weekend”.  But if something more significant (widespread snow) shows up I’ll be on Facebook and Twitter and possibly shoot out another blog post.