Ah, the curse of the onshore southwesterly wind.  As mentioned yesterday, we almost never get anything significant snow-wise in the lower elevations with onshore-flow showers.  That’s why I went with nothing in the valleys for this morning and a trace to 1″ up around 1,000′.  But even that TRACE forecast was a bit aggressive in the metro area.  Sticking snow was mainly north of the metro area (Rainier, Longview, Kalama etc…) in the hills.  Nothing in the West Hills or at my home @1,000′.  A non-event for all of us in Portland.

By the way:  I recommend you follow me on Facebook (search for me @MarkNelsenWeather) and Twitter (@MarkNelsenKPTV)  I post updates there more frequently than on this blog.  Much quicker to do that than an expansive blog posting.  Especially when things change quickly and I’m on-air.

Right now a weather system moving into southwest Oregon is spreading steady light rain or light snow (depending on your elevation) across the area.  I’ve got all snow here at home, and it’s just barely sticking at 34 degrees.  The steady precipitation continues through this evening and then goes back to light showers by 10pm or so.  Those light showers continue through Tuesday.

TUESDAY MORNING COMMUTE SHOULD BE CLEAR.  But patchy areas of snow on the ground, mainly on hills.  Expect some snowy roads up around 1,000′.  That’s the top of the West Hills, Chehalem Mtn, and Mt. Scott.

TUESDAY EVENING’S COMMUTE WILL BE ALL OR MAINLY DRY

Onshore flow continues tonight and Tuesday, but as the system passes by to our south this evening colder air is pulled in overhead.  That should drop sticking snow lower, but then there won’t be much moisture left for snow showers tonight.  Technically ANY ELEVATION could see a dusting tonight.  But no models are showing significant or life-altering snowfall in the lowlands.  The WRF-GFS thinks it’ll be juicy enough for 2″ top of West Hills and Chehalem Mtn, but notice the lowlands stay all clear. 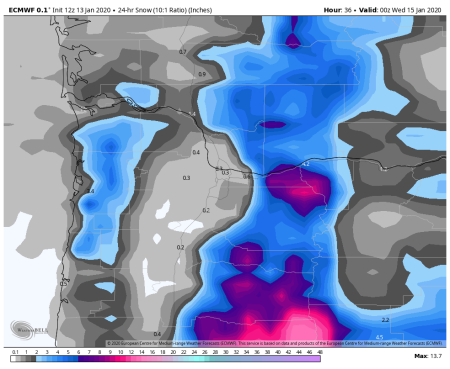 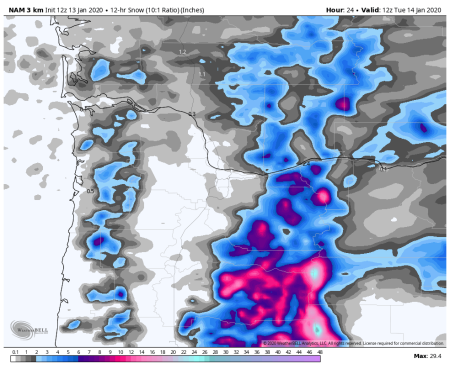 There is an arctic front tantalizingly close to us.  That’s the leading edge of very cold/dry Canadian air.  If that moved over us right now, this snow/rain mix would change Portland to a snowy, gridlocked mess.  BUT, it’s stalled up north around Seattle west of the Cascades and Hermiston/Boardman east of the Cascades. 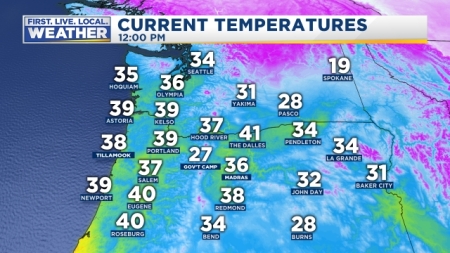 That boundary won’t get any closer through tomorrow because the surface low moving into eastern Oregon this afternoon/evening pulls in more westerly flow behind it.  Too bad…it could have been great!

850mb temperatures fall to around -8 to -9 by Tuesday morning on the back side of this system, cold enough for sea level snow.  But again, models are saying we run out of moisture.  Still, that’s partly the reason I say any elevation could get a dusting of snow late tonight or tomorrow morning.

WHAT ARE WE SEEING FOR LATER WEDNESDAY AND/OR THURSDAY?

Oh boy, how the mighty have fallen…yesterday the ECMWF was pushing a deep surface from off the Oregon coastline far north to Vancouver Island.  I wasn’t sure if that was the correct solution, but now it appears that will be the case.  Check out ensemble low locations from this morning’s GFS run.  This is Thursday 4am. 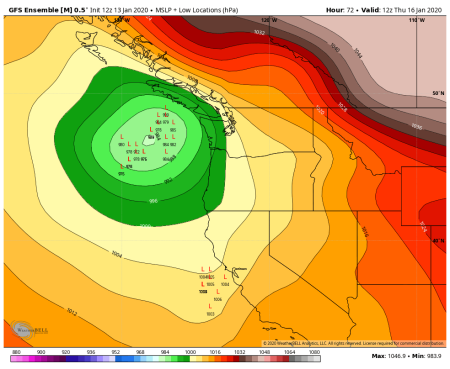 The GEM now agrees as well, even farther north 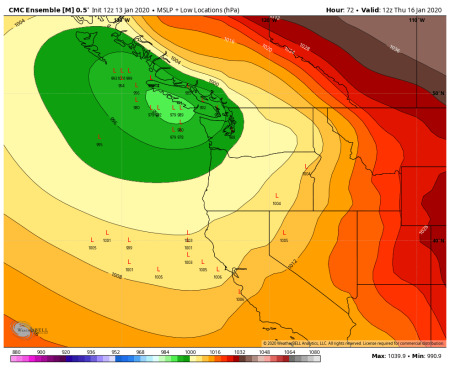 Low pressure moving that far to the north offshore means southerly wind can overcome cold easterly flow out of the Gorge quickly.  If we didn’t already have cold air in place, this wouldn’t be considered a “snow setup” for the metro area.

What does this mean for our snow chances later Wednesday and Thursday?

This entry was posted on Monday, January 13th, 2020 at 12:28 pm and is filed under Weather. You can follow any responses to this entry through the RSS 2.0 feed. Both comments and pings are currently closed.