Here we are, Christmas is just three days away!  The atmospheric river and flooding was sure exciting (although mainly north of us).  But now it appears the dull weather pattern we’ve seen since early October has resumed and will be with us for the next week or longer.

A weak upper-level trough is passing overhead tonight and early tomorrow; that brings a few light showers.  In the mountains maybe 3-6″ new snow by midday Monday. 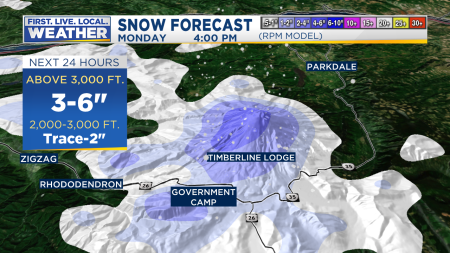 That snow is much needed for Christmas Break skiing.  You can definitely go ski/snowboard right now, but coverage is thin at lower elevations.  Skibowl and Hoodoo have not opened yet.  These next two weeks are critical for ski areas since so many people want to hit the slopes while on vacation. 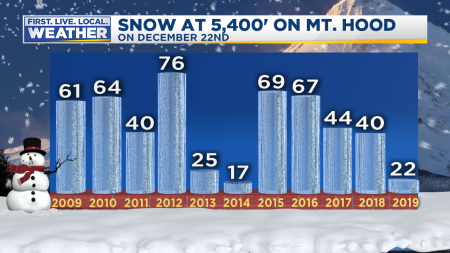 It’s more typical to see 4-5′ snow on the ground at that elevation.  There is just about no snow below 3,000′ in the northern Oregon Cascades; you can see that area is running only 25% of normal.  Only SE Oregon is seeing a typical snowpack for the last week or so of December. 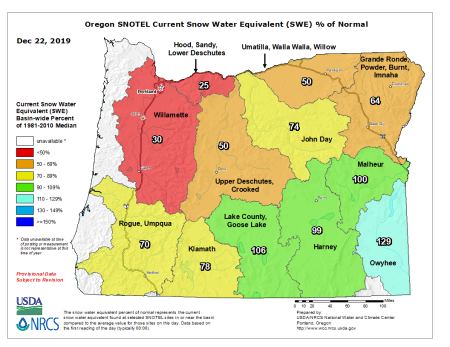 What’s ahead?  After tonight’s system leaves the area, a 2nd even weaker system drops down toward California on Tuesday.  That one stretches apart, weakening as it moves onshore.  It’s possible we get no rainfall from this one.  Or just a few afternoon/evening sprinkles as Christmas Eve begins.  The evening GFS models gives us less than .10″ rainfall between sunset Christmas Eve and midday Christmas Day.  Obviously a non-event.  With morning fog/clouds leading to late afternoon/evening showers, it’ll be a very chilly Christmas Eve.  One would think it could snow that day, but checking soundings it appears that won’t be possible after midday or so.  A bit too warm overhead plus that above 32 degree airmass continues through the night and into Christmas Day.  This is assuming precipitation makes it inland!  That may not happen. 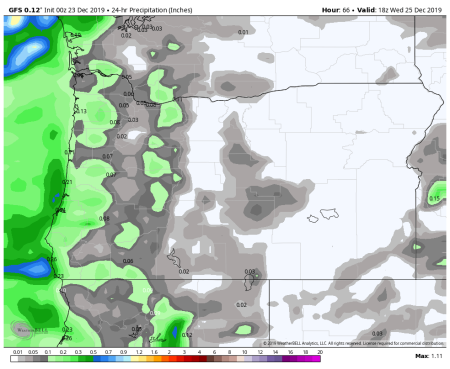 Beyond that I see some weak upper-level ridging Thursday-Saturday for mainly or all dry weather.   The ECMWF ensembles for 500mb height Saturday… 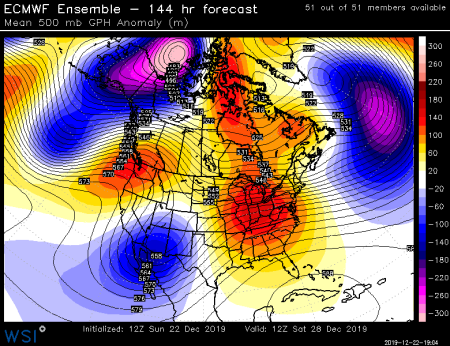 There are hints of some sort of pattern change right around the New Year.  But that’s 10 days away and a bit suspect considering how this season has gone.  I do see the GFS ensembles going for a rainier pattern about that time.  The lower part of the chart shows the ensemble average rainfall heading uphill next week.  We’ll see… 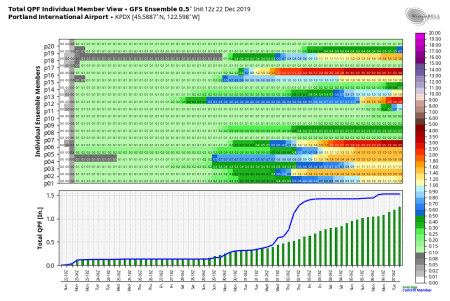 So how about travel weather?  MUCH better this week than that terrible Thanksgiving week.  Remember I-5 closing south of Ashland and I-84 issues in Eastern Oregon?  None of that this time.

First, the Cascades.   Roads should be snow-covered by morning and stay that way most of the day.  But I only expect 3-5″ at most tonight.  Not exactly a snowstorm. 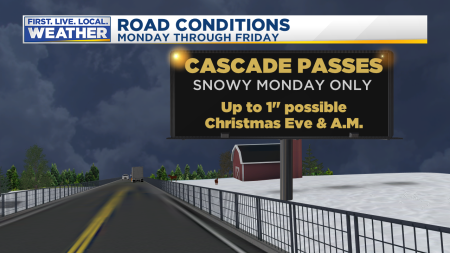 Then that snow works off the highways the rest of the week.  That weak system Christmas Eve might drop an inch…maybe.

How about the Gorge?  Should be just fine for travel this week unless a skiff of snow accumulates with that Tuesday night system.  Or it’ll just stay dry.  Regardless, little effect on travel.  Farther east, I don’t see any organized weather system bringing snowfall into the Blue Mountains of NE Oregon 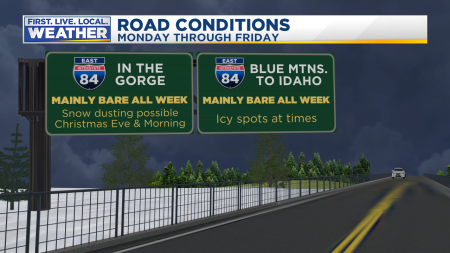 I-5 will remain bare north to Seattle and likely south into California as well.  That weak system moving onshore Tuesday midday/afternoon COULD drop some wet snow on the higher Coast Range summits, but I doubt that will cause any significant travel issues there.  Those Coast Range highways should be clear the rest of the week/weekend. 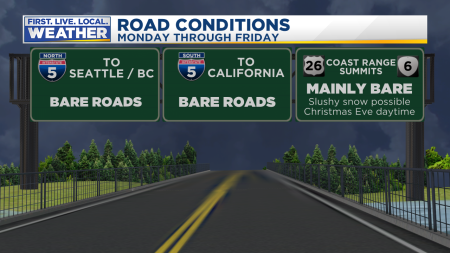 There you go…no White Christmas (sticking snow) for the western lowlands of Oregon/Washington, but maybe a dusting in the Gorge.  Maybe…

Merry Christmas!  I’ll be back at work Thursday

This entry was posted on Sunday, December 22nd, 2019 at 9:08 pm and is filed under Weather. You can follow any responses to this entry through the RSS 2.0 feed. Both comments and pings are currently closed.