Flooding Rains For Some of Us Friday 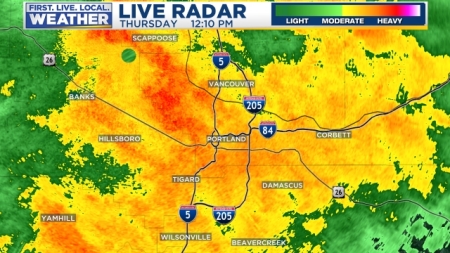 For many days weather forecast models have been forecasting an “atmospheric river” to develop across the eastern Pacific, sending tropical moisture northward into the Pacific Northwest.  Models have been in excellent agreement showing this basic setup and that heaviest rain would occur from late today through early Saturday.  But an atmospheric river is a narrow corridor; like a hose in the atmosphere.  It also tends to move north/south throughout an event as weather disturbances ripple northward.  So forecasting exactly which part of the region gets nailed by heavy rain is tough. But finally this morning models are good agreement.  The heaviest rainfall the next 36 hours will be between Pacific City and Hoquiam along the coastline (centered around Astoria), and into Southwest Washington (Woodland/Kalama to Olympia).

Local flooding is possible anywhere north & west of Portland tonight and Friday.   The NWS has a flood watch in effect which means flooding is possible.  This could be an event similar to February 12th when several inches fell in Banks, Vernonia, Scappoose, Kalama etc… but very light rain central/south/east metro.

For the weather geeks…

It was good to see models come together the past 24 hours.   I love this graphic; the integrated water vapor transport or IVT.  Shows where the “river” is aimed this evening at 7pm, 10pm, and again Friday at 10pm.

The ECWMF is probably farthest north showing the intense rain band developing this evening to our north; hitting Centralia/Chehalis and Olympia with the biggest downpours.  Six hour rain ending at 10pm

Then 6 hours later ending at 4am Friday 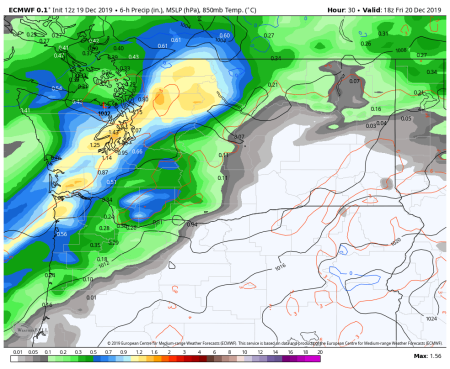 The 24 hour total ending Friday afternoon shows very little rain south of Portland, just an inch in the city, but a solid 3-5″ up north 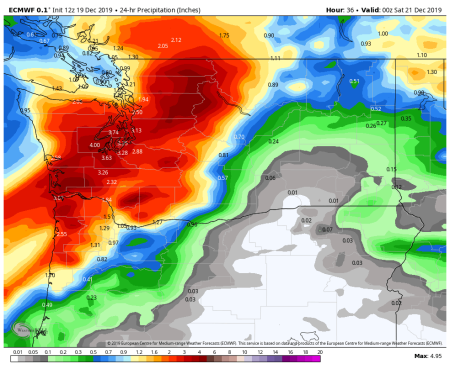 GFS model is similar this morning although an even more stark cutoff to rain in metro area.  It pours in Forest Grove but sprinkles in Molalla

And finally the GEM (Canadian) 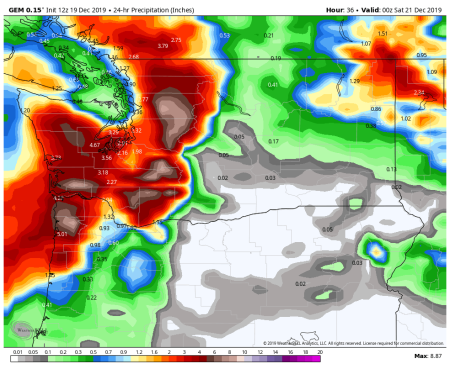 Of course if models are 50 miles off on placement, heavy rain could still show up in the metro area.  Good reason to keep the Flood Watch going!

What about Mt. Hood?  Is the meager snow pack going to wash away?  No, although we sure won’t gain much.  It’s very early in the season, but snow pack is running at less than 50% of average in much of northern Oregon 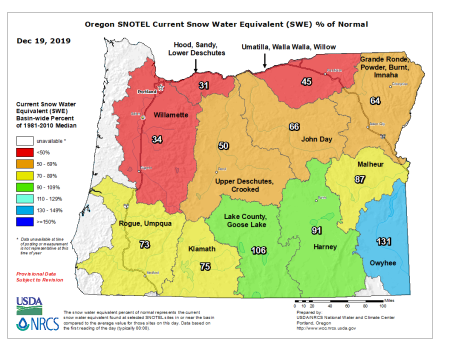 Warmer air is surging into the Cascades right now and will push the snow level above 6,000′.  The bad news is that with the fire hose aimed north of Mt. Hood, snow levels stay high until early Saturday.  Anything that falls from this afternoon through Friday evening should be in the form of rain, not snow.  The good news?  The main band of rain is so far north that I don’t expect a dumping rain on Mt. Hood Friday, just light rain at times.  That said, a warm/humid airmass eats snow more quickly than any sunny 40 degree day in December.

Then as the whole system slides south and east Friday night, snow levels drop and we should see at least 6″ on the back side of this system.  Very tough to get additional terrain and/or ski areas open for Christmas Vacation without a good dumping. 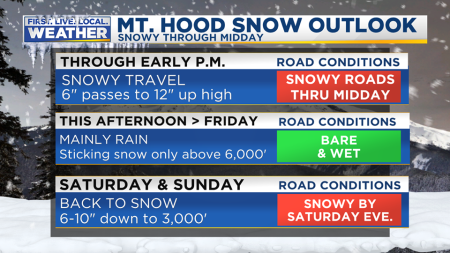