An “atmospheric river” will set up late Wednesday through early Saturday along the West Coast.  An “AR” is a narrow channel of tremendous water vapor transport through the atmosphere.   From the tropics or subtropics into the middle latitudes (where we live).  For this reason they are often referred to as a Pineapple Express.  They can easily transport double the volume of the Amazon River overhead!  They have always existed, but the naming is relatively new (within the past 20 years).  You can read more about them on the AMS website. 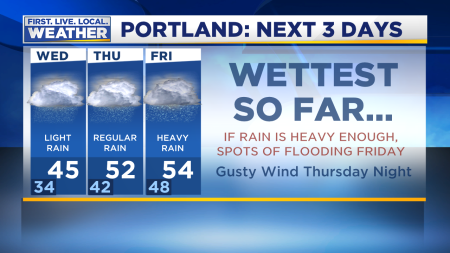 Of course the big question is “will there be enough rain for flooding?”.  We still don’t know the answer; partly because models are trending DOWNWARD on rain totals now through Saturday.  First, widespread river flooding on the Willamette or Columbia river systems is very unlikely.  That’s because reservoirs are at their winter flood control minimum levels.  In fact Detroit Lake is 20 feet BELOW that level!  The entire storage system for the Willamette River is basically “empty” with respect to flood control capacity. 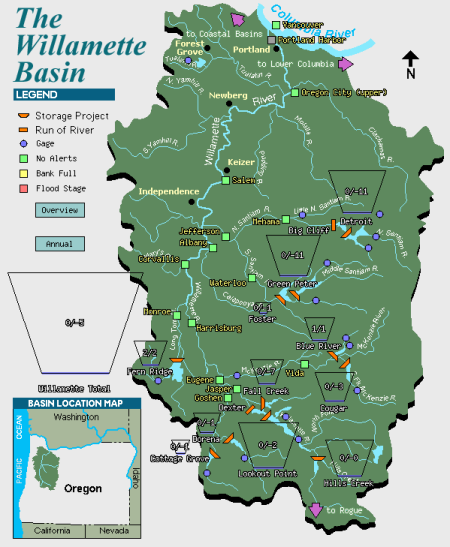 Unregulated smaller rivers are still at risk of course and then there’s the situation with “urban and small stream flooding”.  That happens when we get a long period of moderate rain or a few hours of intense rainfall.  The GFS model says forget about both.  But the ECMWF is still going gangbusters for a major rain event central/north/west metro Friday.  Check out 6 hour rainfall total just for 10am-4pm Friday centered right over the metro area

It thinks we’ll see 3″ or so in a good part of the metro area in just 24 hours ending 10pm Friday night.  This would be a big deal and cause widespread flooding issues

BUT, other models are somewhat/significantly drier.  Predicting exact location and intensity of atmospheric rivers is tough.  Models probably won’t settle down for another day or so.

Another item of interest; we go right back into split flow and upper-level ridging for Christmas week.  This isn’t a turn toward a typical wintertime wet weather pattern.  Just a blip in an unremarkable wet season so far.

This entry was posted on Tuesday, December 17th, 2019 at 8:17 pm and is filed under Weather. You can follow any responses to this entry through the RSS 2.0 feed. Both comments and pings are currently closed.