As mentioned in last night’s post, a strong storm is headed for the California/Oregon border tomorrow afternoon.  Not much has changed and I’m in six evening newscasts tonight, so this will be a bit briefer.

The “explosive cyclogenesis” is still forecast to occur off the Oregon coastline the next 24 hours.  That’s sometimes called “bombogenesis“, a “meteorological bomb”, or even a “bomb cyclone”.  The 18z ECMWF model takes a 1010 mb low down to 970 mb as it moves onto the coastline somewhere around Brookings.  That’s 40 millibars in less than 24 hours!  Luckily the track means most of the big wind is offshore and the southerly movement “takes away” from the southerly wind gusts over land.

As of early this evening, all models except the ECMWF totally dry us out within 24 hours north of Salem.  Even the new 18z ECMWF just gives us a few sprinkles tomorrow evening/night.  Thus it’s very unlikely the lowest elevations will see snow, even just in the air.  Notice the 10″ plus over Siskiyou Summit south of Ashland on I-5?  That’s going to cause plenty of trouble tomorrow evening and Wednesday 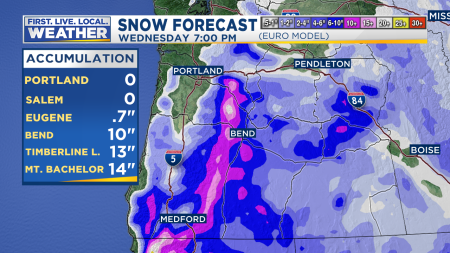 The rest of the forecast is easy…dry and chilly Thursday through Saturday.  Snow-covered areas east of the Cascades turn VERY cold.