Quite a change out there today.  Yesterday we were 62 and mainly sunny, today we stayed around 50 degrees and remained under a thick gray blanket of cloud cover.

As expected, this first half of November is turning out to be mild and uneventful.  November is typically the start of the rainy season in the Pacific Northwest.  But in the lowlands we’ve seen much below normal rainfall.  So far, less than 1/2″ rain in P-Town and there won’t be much more by Friday the 15th.

Why so quiet and mild?  An area of higher-than-normal upper-level heights (also known as “ridging”) wants to remain near/over the West Coast.  This diverts storms to the north or weakens them as they move inland.  This was also a persistent feature for much of last winter (until February).

Now take a look at the 500 millibar height map from the ECMWF model.  This is actually an average from 51 “ensemble” members.  The solid lines are contours, showing the height of that pressure surface.  Wind at this level (~18,000′) follows the lines.  So in the case of the map below you’re seeing westerly flow into far NW USA and western Canada.  The colors represent the anomaly.  Red = higher than average heights, blues/pinks = below average.  That’s quite a bit of ridging over the western USA!  This map is for Sunday.  So here we are at November 17th and the pattern continues.

It appears the ridge will “back up” a little bit for NEXT week.  Check out Tuesday as a chilly upper-level trough has dropped into the PACNW. 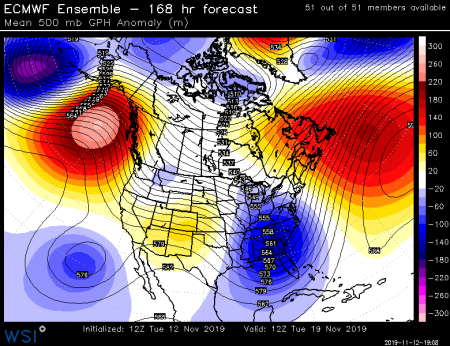 But for the rest of next week things remain the same, both on the ECMWF and GFS models.  Here’s Friday the 22nd, showing a bit of a “Rex Block”.  That’s an upper-level high north of an upper-level low.  It can sometimes be a stable pattern.  Definitely a drier than normal pattern for us.

Up to this point I’m feeling pretty confident about the general trend…drier and milder than average for the next 10 days.  But right after, models diverge.  5 days later we’ve reached the two-week point of the operational forecast models.  The GEM and ECMWF both continuing ridging for this day before Thanksgiving (ECMWF below)

But the GFS goes cool and wet, quite a pattern change…we’ll see. 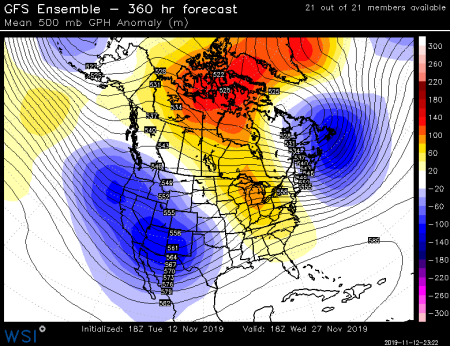 So again, no big changes for at least the next 10 days.

What does this mean for the ski/snow season?

After a cold end to September and the coldest October in decades, some of us were getting excited.  Hard to believe there was two feet of snow on the ground at Timberline a couple weeks ago.  It’s all gone after many days in the 40s and even some 50s.  The view this morning before it rained… 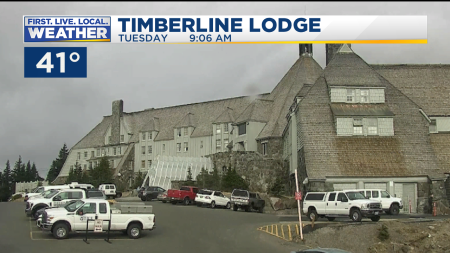 So we’re starting from zero again.  No early start to the ski season this year.  Little or no snow on the ground through Sunday the 17th 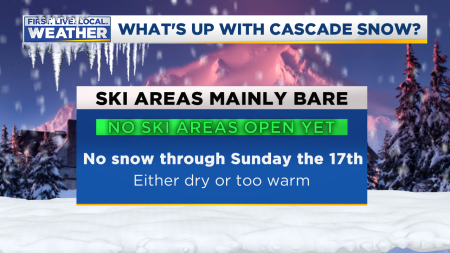 We should see a little snow around Tuesday the 19th with the previously mentioned upper-level trough.  Then it’s mainly dry or mild/warm through the following weekend.  We use this graphic on our 6pm show during the cool season on FOX12.  Sometimes on other shows as well.