With a week to go, September is running near average temperature-wise.  That comes from a very warm start followed by the last 9 days of cool temps.  Across other parts of Oregon it’s a bit below average.

Looking ahead, it’s clear September will end very cool this weekend and early next week.  In fact it’ll be about the coolest it can get this time of year.

Right now the very weak late September jet stream is just to our north, sending plenty of clouds and a few sprinkles.  That general setup continues through Thursday.

There won’t be any weather systems nearby Wednesday so that should be a spectacular day like we saw this past Saturday.  But Friday through the weekend that strong ridge of high pressure offshore pushes west and north.  That forces a cold dip in the upper atmosphere south over the western USA.  This IS the same setup that sends cold arctic air down into the Pacific Northwest during the winter.

But of course it’s late September so snow won’t fall down to sea-level, or anywhere close.

For the weather geeks, 850mb temperature is forecast by both ECMWF and GFS to fall to at least +1, and possibly as low as -2 over Portland/Salem.  The coldest on record over Salem anytime before October 7th is between -2 and -3.  So it doesn’t get much colder than this in late September.  What does that mean?  It means snow COULD fall as low as Government Camp (3,500′).  Of course that means precipitation has to show up.  The earliest fall snowfall at Government Camp was September 23rd, 1984 when 3″ fell.

This setup is typically not a big rain/snow producer; because the air is coming down from dry land up north, not from the Pacific Ocean.  Take a look at three rain forecasts for Friday through next Monday.  Generally not much rain in the lowlands

This general pattern is likely to stick around for awhile.  Both 6-10 day and 8-14 day outlooks from CPC show the same “western trough/eastern ridge” pattern continuing through the first week of October. 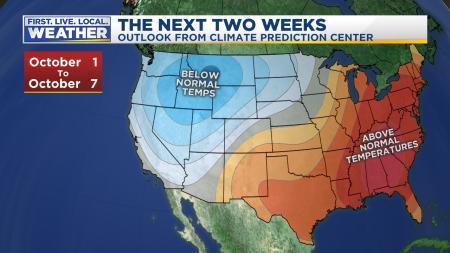