An Early & Wet Fall Continues; Even Cooler Temps On The Way

It was dry today!  No rain in Portland today, what a nice break after so many downpours the past week.   Don’t get used to the dry weather, it’ll be wet again after midnight, plus Sunday should be a soaker too.  Maybe more important, all our models are showing even cooler conditions to wrap up the last 10 days of September.

Summer “ended” on September 6th this year in our area; that was the end of reliably  warm & dry weather.  There’s no sign of anything above 75 in the next week either and our very wet September will continue…

The updated September numbers so far for Portland. 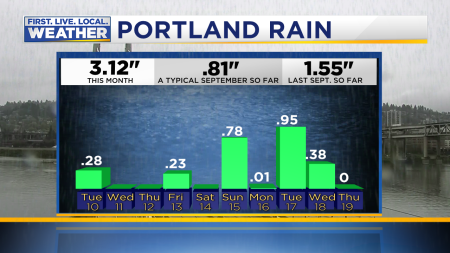 Take a look at some other spots around the region, some hefty totals in the Coast and Cascade Ranges 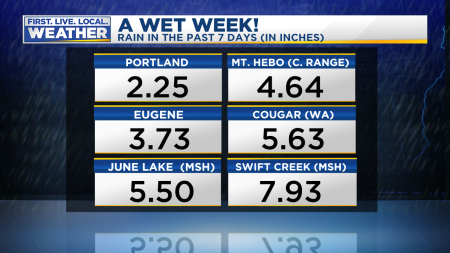 The entire region has been wet too.  The precipitation anomaly for the past 10 days 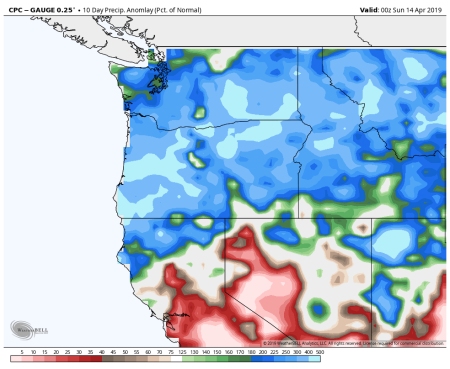 Real quiet tonight through Saturday, but a strong onshore flow and a dying weather system gives us light showers tonight through the morning commute Friday.  Saturday still looks great, at least compared to what we’ve seen lately.  Partly cloudy with temps making it into the lower 70s; at least a little more reasonable for late September.

Sunday = a soaker as an upper-level trough moves overhead accompanied by a cold front.  The entire first part of the day should be wet, then it’s on to showers the 2nd half.   Monday should be reasonable as showers end, but cool with 850mb temps only around +5.  Even with some sunshine the best we’ll do is mid-upper 60s.

Weather geeks will recognize the weather pattern the rest of next week; a classic arctic blast setup for wintertime Wednesday through Saturday.   Look at the ECMWF ensemble 500 millibar height chart for next Tuesday.  A strong ridge attempting to build over and just west of the West Coast.  Heights go up to around 580 or so which is typically warm fall weather.  Yet there is plenty of fast westerly flow overhead which keeps us from getting very warm with lots of cloud cover and maybe even showers making it as far south as northern Oregon. 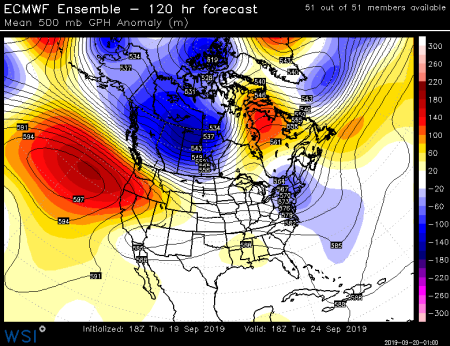 But see what happens by Thursday a week from now?  The ridge is retrograding (moving farther to the west) and building over Alaska.  That forces a cold airmass to move south through Western Canada.  You can see a cold upper-level trough dropping south around Juneau.  At this point it’s showery over us (although not stormy) and snow levels are heading down toward the Cascade Passes for the first time this fall season.

Then two days later…Saturday the 28th.  This is the pattern we had in February with cold (cool in September) Canadian air pouring south into the western USA.  A strong ridge is…wait for it…parked right over Alaska and the eastern Pacific.   Hmmm, just like February and parts of this past summer.  Interesting.  This pattern is not very wet and could give us partly cloudy skies with daytime highs in 60s and lows in the 40s. 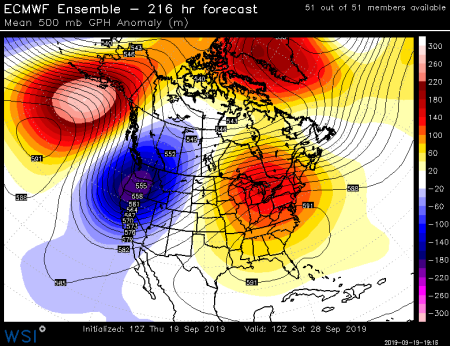 I’ve only shown you the ECMWF ensemble maps, but the Canadian and GFS are very similar.  September will likely end cool.  The previous run of the ECMWF showed this similar “dipole” of a chilly western USA and warm east continuing into at least the first few days of October (through the next two weeks).  Surface temp anomaly from September 29th through October 6th…

The effect is clear; the 15 day ensemble low/high temps for Portland are almost all well below average for late September and early October