We’ve just seen a few light showers today, but rain picks up west slopes of Cascades and in the Cascades themselves.    That has allowed many rivers to drop west of the Cascades.  Of the Willamette River tributaries, only the Pudding and Coast Fork Willamette River remain under flood warnings.  The Willamette itself crested early today in Eugene and now that crest is working its way downstream.  Highest water at Albany and Salem will be tomorrow.  In the metro area, the much lighter rain totals the past 4 days up here mean no flooding on the Willamette River, but it’s still running high with lots of logs and debris in the water

In Eastern Oregon the flooding has been more serious, especially in the John Day River basin.  At Service Creek the 3rd highest crest on record is forecast for tomorrow.  Some pics from ODOT 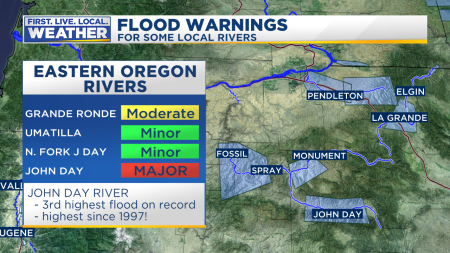 70% of Oregon’s population lives within the Willamette River Basin.  And it appears we have avoided a major flood event this time around.  That’s because 11 flood control reservoirs have been built since 1941.  It’s interesting to note that this same weather event pre-1941 would have produced a major flood in the Willamette River Basin.  The filling of those reservoirs has been amazing this week.  Take a look at current conditions

There is one reservoir that has filled beyond the “TOP OF FLOOD CONTROL” level; that’s Dorena.  It is spilling water “uncontrolled” today, which just means water is going over the spillway as it is designed to do during a flood.  That DOESN’T mean water is going “over the top of the dam”.  That would be bad and that’s definitely not the case.

Then there are 5 reservoirs (in yellow) where water is within 2 feet of that spillway level.  Luckily at most of those the incoming water volume has slowed quite a bit.

There are 5 reservoirs (in green) with room to store more water.  At a few of those (Detroit Lake) water has been filling the lake rapidly.  Check out Detroit Lake 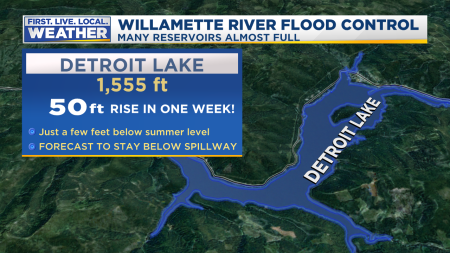 A 50 foot rise in the past week!  Right now the lake is up to just 8′ under its “full” summer level of 1563.5′.  That lake is still 15′ or so away from an uncontrolled spillway release; plenty of storage available.

If another atmospheric river event with many inches of rain were to show up in the next few days?  We’d see widespread flooding in the Willamette Valley due to little water storage left.  Luckily that is NOT the case.  Sure, there will be more rain in the upcoming week, but not too heavy.  RPM model shows 2-4″ rain in Cascades the next 3 days, then lighter totals through the weekend.