I figured it would happen at some point and here it is.  For the first time in my career (a quarter century!) we are getting Willamette Valley and Cascade foothills flooding in the spring.  The latest I’ve seen it in the past is February.   At 6pm there are 9 rivers under flood warnings in Western Oregon.  Another 5 are under flood warnings in eastern Oregon, although that is not as unusual in springtime due to rain + snowmelt.

Why is this happening?

The past three days a series of weather disturbances have moved into Oregon from off the Pacific.  The nearly continuous flow of moisture has dumped unusually heavy rain in the central/southern parts of western Oregon.  Models did an EXCELLENT job handling the rain forecast.   Here’s the 3 day rain forecast from Saturday morning’s WRF-GFS model.  It showed widespread 5-10″ rain totals in the central Cascades and a clear bullseye on Eugene/Roseburg in the western valleys.  This is the same area hit by the massive snow storm in February.

How much fell?  PDX has picked up a bit under 2″.  Eugene saw its wettest April day on record Sunday, and now has over 6″ for the month 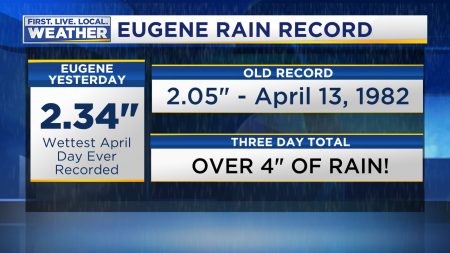 I’ve never seen such huge totals in March or April.  The result is flooding.  Check out numbers for the Willamette River.  Unprecedented for April.  In fact the river is forecast to rise to over 28′ at Albany, the highest level since late 1996 (two floods that year)

The more reasonable rainfall in Northwest Oregon mean less flooding north of Albany.  The river will crest a foot or so below flood stage at Salem tomorrow, still the highest in 7 years.  I checked both forecast locations and found there are no major river crests in March or April in the historical database.

In Portland the Willamette River will stay well below flood stage due to less rain up here.  We have seen higher levels in May/June in the metro area in recent years due to high water on the Columbia River.

A cool and showery pattern continues for at least one more week.  The ECMWF ensembles show another 2″ is possible in the valleys during the next two weeks…wet!

Without the storage available on 10 different Willamette Basin projects, flooding would have been huge right now. 70% of Oregon’s population lives within the Willamette River basin.  Several reservoirs are near capacity after rapid filling the past few days.  Green Peter, Dorena, Blue River, and Fall Creek lakes are pretty much full. 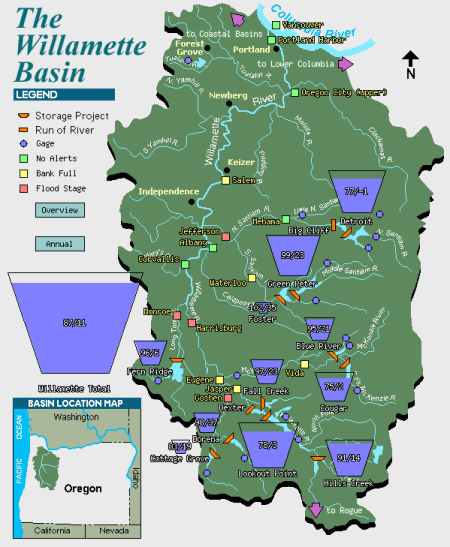 The first number is percent full, the 2nd is where they are compared to the “control curve” which is where the Corps of Engineers would like them to be this time of year.  Detroit Lake was well below normal a week ago, but has gained 40′ in just a week!  It’s got about 22′ to go to “full pool”.  It has filled that much in just the past two days.

So…if the rain will at least slow down to more typical April showers we might be okay. But clearly there’s not much room left for another heavy rain event in the next week or two.  Regardless, the Willamette River will be running high for quite awhile.

This entry was posted on Monday, April 8th, 2019 at 6:06 pm and is filed under Weather. You can follow any responses to this entry through the RSS 2.0 feed. Both comments and pings are currently closed.