Models have done a very good job forecasting a rare heavy rainfall event (for April) across western Oregon and far SW Washington this weekend.  There was a break midday Saturday, but otherwise it’s been a wet weekend.  PDX has seen about 1.30″ rain since early Saturday morning, and over 1/2″ just today

Farther south the rain has been much heavier.  Approaching 3.00″ at this hour!   When the strong westerly flow runs into the Cascades, air is forced to rise and cool, squeezing even more rain out of the airmass.  A few spots have seen over 5″ with another wet 24 hours to go. 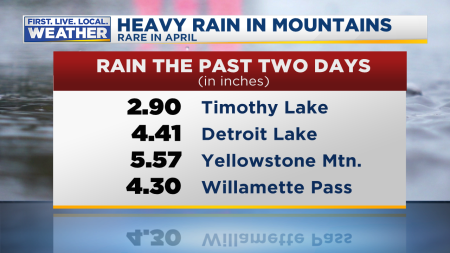 Minor flooding is occurring or will happen in the next 36 hours on several rivers, mainly in the central/southern Willamette Valley and Eastern Oregon.  Moderate flooding is forecast along the Coast Fork Willamette River from Cottage Grove through Creswell and also along the John Day River.  Since less than 50% of the Willamette River basin is regulated through reservoirs (north of Eugene) it IS possible to get flooding without having those reservoirs full.  An example is the river forecast plot (modeled, not a forecast) for Albany.  At this point the river could rise 14 feet in the next 2 days.  That’s a lot of water!

After one last wave of moisture moves through tonight, we’ll be back to showers & sunbreaks Monday (much brighter!).  I think there’s enough instability that a thunderstorm or two will pop up inland; especially since the atmosphere overhead will be relatively warm.  Highs should make it into the lower 60s west of the Cascades.

The one bright spot in all this rain is the storage of water for the upcoming dry season.  I see Detroit Lake is forecast to be full or nearly full in just a few days, having risen about 30 feet in just the past week!  Another 35 feet of filling is forecast in just the next four days.  THIS is the reason reservoirs are kept low all winter and only slowly allowed to fill in the spring.  Imagine if that lake was full right now…

This entry was posted on Sunday, April 7th, 2019 at 7:13 pm and is filed under Weather. You can follow any responses to this entry through the RSS 2.0 feed. Both comments and pings are currently closed.