It’s been another COLD day (for early March) across much of the Pacific Northwest. It’s not really all that cold west of the Cascades but eastside is a different story.  Check out those HIGH temperatures right around 20 in Central Oregon and Pendleton.

The Dalles has never been this cold in March, reaching below 10 degrees this morning. 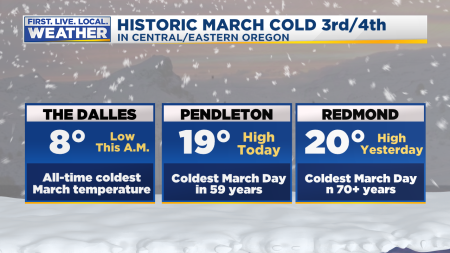 This morning in the metro area some of us made it down into the upper teens.  Not too unusual in December or January, but I’ve never seen it this cold in early March.  Still, it’s been 30 years since that cold March 1989 start so it was probably time to get a cold spell.

We have a VERY dry airmass over our region right now, dewpoints have been around 10 degrees here in Portland.  When you bring that dry air indoors and heat it up to 70, you get a relative humidity around 10%.  That explains a dry throat, skin, and possibly a blood nose too!

So you’ve probably noticed some snowflakes on your weather app again.  What’s up?

All models show moisture in the form of clouds and then precipitation moving north out of California Tuesday night and Wednesday morning.  This rides over the cold airmass already in place over us.  The result could look something like this during the Wednesday morning commute:

Light snow falling with temperatures right around freezing.  In early March everything has to be just right for snow to stick to lower elevations.  This appears to be a rare case when that could happen.  BUT, each model is different and some are too dry or too warm.

For example the ECMWF shows very little snow accumulation through Wednesday afternoon, but then tries to put down some light snow in the Portland area Wednesday evening/night.  Not sure if I buy that at this point.

The brand new evening GEM model wants to put an inch of snow over the metro area between 11am and 4pm Wednesday; extremely unlikely during the middle of the day plus its own temperatures are 35-38 during the time it’s generating sticking snow

After the morning models come in tomorrow I’ll put up a more detailed blog post.