All evening models are in at 10pm.  They are all drier, which of course means less snow for the Portland metro area.  I’ve lowered the forecast a bit because of this

What does this mean?

All the other forecasts remain unchanged, a snowstorm just about everywhere south and east of the metro area.  Click on each for a closer view.

The final holdout (ECMWF) model came in just before 10pm and looks like this.  Seems pretty reasonable to me. 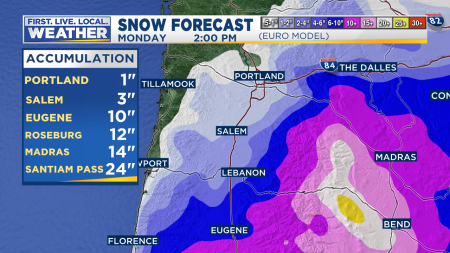 Snowstorm Monday Morning in Willamette Valley; Some In Portland Metro Too

Good news!  With less than 24 hours to go, models have come into very good agreement this morning.  They agree a 2nd winter storm will track through Oregon late tonight and Monday.  They also agree the storm center (lowest pressure) comes onshore around Cape Blanco Monday morning and moves northeast to around Baker City by evening.  Heavy snow will develop on the north side (within 100-150 miles) of this low center as it tracks through the state.  All models agree on this now so the only questions are: how far north do we get heavy snow (4″+), and how far north will ANY snow make it?

Here are my forecasts; reasoning follows after

(This includes all areas from St. Helens/Woodland down to a Newberg/Wilsonville/Mollala line)

I wouldn’t cancel ANYTHING until we see exactly what happens in the morning.  If we only get 1″ of sloppy/wet snow (low-end forecast), driving will be okay all day long.

It was great to see models fall into line the past two runs with that low pressure center.  It’s also nice that the WRF-GFS and ECMWF are much closer together with the snow totals.   Just looking at the precipitation forecast from the ECMWF you get the picture and see why there’s a much better chance for a big snow event central valley southward.  2″ of precipitation at Eugene but pretty much dry Astoria to Chehalis.  What could go wrong???  Praying that this precip shield isn’t 100 miles farther north = biggest February snowstorm on record, a foot of heavy/wet snow in the metro area!  Or that it’s 50 miles farther south in the end and we have a regular Monday with flurries/showers at times with NO snow.

This converts to a snowfall map like this, Eugene to Roseburg gets BURIED by a major snowstorm tomorrow, over a foot!  This would shut down I-5 and bring lots of power lines down in the south valley.  Remember I said SOMEONE between Olympia and Roseburg was going to get a big snowstorm?  At this point Eugene/Roseburg are ground zero.

Meanwhile the GFS/WRF-GFS had us dry (no snow) on last night’s run, but now has decided to turn things a bit wetter (more white).    That’s ZERO to 2″ metro area, and 8-14″ Eugene to Roseburg!

Here are a few more models…the GEM, GFS, HRRR, & RPM.  All produce very little snow in metro area.  Which actually means the ECMWF is the only model giving us significant snow in Portland.  So once again I’m trusting the “King Euro”.  Here are snow totals through 9am tomorrow, when all models except Euro say we’re pretty much done with snowfall

Notice I’m hitting the “roads won’t be that bad with 1-3″ of snow” in the metro area tomorrow pretty hard?

That’s because the last few days of February we get a lot of energy from the sun even through thick cloud cover.  A good example is this morning.  Snow fell in many hilly parts of the metro area.  The pavement surface temperature at Division/I-205 and Sylvan/US26 both dropped to right around 32 degrees at sunrise with snow showers.  Yet at 11am they are both already up to 40-42 degrees.  The result is that less than 2″ snow, or snow that doesn’t fall very heavily during the day won’t be able to accumulate on pavement after about 9am all the way through about 7pm.  Now if it just DUMPS snow, (central/southern valley) it can still stick.  But at this point I don’t see that in the Portland metro area.

Cold east wind continues to blow tomorrow night through Wednesday, so with any clearing, those wet roads freeze for the Tuesday morning commute.  Some models bring a little more precipitation over us Tuesday night or Wednesday AM.  We’ll see if that’s the frozen variety or not.  Clearly the northern part of the jet stream wants to hang on into early March.  We still have another week of cold weather ahead…