Coldest Start To February Since 1989; More Chilly Temps Ahead

The weather sure slowed down the middle of last week.  The most excitement we’ve had the past few days has been occasional sticking snow down into the hills around the metro area.  The next 3-6 days should be relatively “weather drama free” as well.

First, what a change!  On January 31st our winter (December-February) was within the top 10 warmest, and the warmest since 2015…then a big change…

This month (through the 17th) has seen an average temperature of 37.6 degrees in Portland, and that’s the coldest first 17 days of February in 30 years!  That was the year we had a HUGE arctic blast the first 10 days of the month.  We saw a HIGH of 15 early in the month as the arctic air came blasting in.  This month we didn’t get an arctic blast, but it’s been consistently chilly the past two weeks.  And that is going to continue for at least 7 more days. 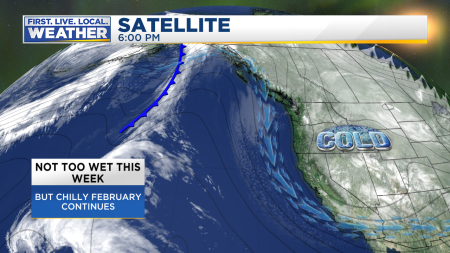 Upper-level high pressure is very persistent over the Eastern Pacific; on the back side of the ridge one system after another has been diving south either just offshore, just inland, or to our east.  That brings wave after wave of chilly air out of Canada.  Another (relatively weak) surge of cool air is moving over us right now.  That dries us out tonight and Monday.  Yes, we actually get a dry day Monday.

IS IT GOING TO SNOW IN THE LOWLANDS AGAIN?

Of course we all know north of Longview in western Washington and in the central/eastern Gorge it’s been a spectacular and historic month for snow.  Here in Northwest Oregon we just missed out on what could have been a historic February snowfall (early last week).  Instead we went from snow to rain last Sunday evening with that southerly wind and that was it for snow in the lowlands.  Since that time, when we’ve seen precipitation overhead we’ve seen onshore flow (too warm), or the atmosphere in general just hasn’t been cold enough to support snow down to sea level.  We had a couple of days late last week where freezing rain was very close to the east metro area.  But the cold air coming in from the east just wasn’t all that cold = no freezing rain.

At this point I don’t see a setup for widespread lowland snow through at least next Saturday, most likely through next Sunday.  There are hints that we might get some sort of offshore flow + moisture for something frozen in the Gorge and maybe east metro around 8-10 days from now.  But that’s too far out.  The morning ECMWF model nicely displayed our slim chance of sledding west of the Cascades the next 6 days

Why No Good Chances for Snow?

That said, the pattern seems to want to change somewhat about a week from now.  Check out the ECMWF ensemble 500mb height anomalies for this coming Thursday…a cool trough over us, similar to what we’ve been seeing lately

But next Sunday, that upper level ridge builds farther north into Alaska which COULD divert a more potent arctic airmass down into the northern USA

Or it could set up a clash of milder air coming in underneath that ridge and a cold easterly flow at the surface.  It IS possible to get a real snowstorm in the Portland area the last few days of February, but everything has to be exactly right (or wrong?).  It’s even more rare to get a significant ice storm this late in the season, in fact I’m not aware of an ice storm in the metro area in mid-late February or later.  That doesn’t mean it hasn’t happened, but I haven’t seen it during my 28 years forecasting here.  It is easier to get a Gorge ice/snow storm this late in the season and that may be what happens 8-10 days from now.

So to wrap it up, the next 5-6 days should be somewhat tranquil, but your heating bill will continue to soar for February 2019.  Could be a big one coming in the mail by early March!