Snowy system #2 this week is history and now it’s on to our next two “chances” for snow in the lowlands.  Neither one screams SNOW STORM to me.  By the way, the official total in Portland is 4.9″ from this morning’s snow and 1.2″ from Tuesday’s snow.  That gives us a seasonal and February total of 6.1″.  There were 15 consecutive Februarys in Portland with less than 1″ of snow (1995-2010).  But now we’ve seen 3 (2014, 2018, 2019) with significant snowfall.  Strange stuff eh?  So much for “February typically doesn’t do much around here snow-wise”.  I need to stop repeating that, apparently now incorrect, fact.

What’s ahead in the metro area?

TONIGHT:  Everyone falls below freezing quickly after sunset.  I think some snow showers will move back over the metro area from eastern Oregon overnight.  The result is that ANYONE in the metro area could get a dusting to 1” of snow.  That 1” is most likely east metro where roads are already ice/snowy so not much effect.  Lows drop into the upper 20s

SUNDAY:  Partly cloudy skies with highs into the mid 30s, then precipitation returns right around sunset.  When it first arrives it should be in the form of snow, then a mild southerly wind should push sticking snow up to around 1,000’ during the night.  So we don’t have a “snowstorm” coming for the Monday morning commute.  I see a quick dusting to 1”, mainly in the hills and Clark county, tomorrow afternoon/evening.  Then just plain rain or rain/snow mix overnight.  Most likely the metro area will see temps RISE during the night, possibly as high as 40 degrees by sunrise.

MONDAY:  For the Monday morning commute there will likely be plenty of snow in north Clark?Cowlitz counties where at least 2-4″ falls early tomorrow evening. and maybe a foot of new snow in the Gorge!   But in the metro area that southerly wind should keep us snow-free and above freezing through this event.

Tonight and most of Sunday are easy.  Mainly dry, except “wraparound” snow showers from eastern Washington may cross over the metro area tonight; similar to what we saw Monday night.  Models keep hinting we could get at least a dusting out of this.  Obviously it’s plenty cold and anything that falls could stick.  We bottom out in the mid-upper 20s tonight as the east wind backs off.

Sunday evening the forecast gets a bit tricky since a much wetter system is on the way plus we have cold air in place.  However, this time we get the dreaded SOUTH WIND again, without the return to late night cold easterly wind.  Since the surface low pressure center is headed to our north we sure aren’t getting a significant snow event this time around.  Every single model is showing that’s the case.  In fact check out the 00z NAM-MM5.

12 millibars southerly gradient Eugene to Olympia tomorrow.  That means gusts 25-35 mph!  Snow sure won’t be sticking long with that setup. 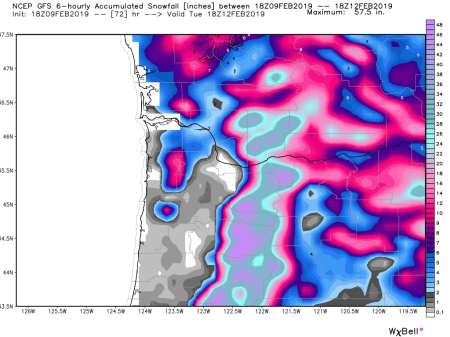 And the 12z ECMWF was similar, although showing that brief dusting chance with intial precipitation around sunset.

In the metro area we will avoid this next snow chance.  So no, we’re not going to see 14″ of snow.  And no, it won’t be the biggest snowstorm this century.  But in the Columbia River Gorge and some spots north of Longview this will be a good snow producer, especially in the Gorge.  That’s because the boundary of cold arctic air to the north and milder air south of it will linger quite close to the Columbia River Gorge much of this next week.  I don’t see any big surge of mild air flooding into the Gorge through at least Tuesday, so ALL of that will fall as snow.  I see 12-20″ falling from Bonneville Dam to Hood River through midday Tuesday.  A big snow storm is on the way in the central/eastern Gorge!

Portland officially received 4.2″ snowfall at the NWS office in Parkrose overnight.  3″ fell in north Portland at the airport.

I see a 6″ in Gresham, 5″ in Evergreen area of East Vancouver, and 2.5″ in central Vancouver.  Somehow I ended up with 8.5″ at 1,000′ SE of Crown Point and just got a report of over a foot new snow in Dodson near Bonneville.

But many of you are feeling left out with a trace or even NOTHING on the ground west and south metro.  I think ODOT’s traffic speed map shows the story pretty well with slow speeds in about 2/3rd of metro area (central, north, & east) and normal freeway/highway speeds in the western/southern 1/3.

Models absolutely nailed the warming south wind (which many forecasters somewhat ignored leading into it, including me) yesterday evening.  They also nailed the overnight switch to cold/dry easterly wind changing us over to snow.  I was pleasantly surprised when I rolled out of bed and saw all temps below freezing throughout the metro area.

By the time it was cold enough near sunrise, the moisture had mostly run out.  There were also very strong hints that would happen.  Even the ECMWF from yesterday morning showed spots in the metro might get almost nothing.

The GFS was predicting little/no snow for this event for Portland, it was terrible except south/west metro and into the valley.  It kept temps too warm.  That 2″ you see it plotting for PDX is more of a low-resolution contouring issue, it was keeping temps above freezing most of the time in the city.

Far more snow fell than expected in some areas, like Camas, Gresham, western Gorge.  The 5-8″ totals are a surprise.

We knew there was a decent chance the west/south side of the metro area would get hosed, but I figured all of you would get at least a dusting.  I suppose that’s still possible in the next few hours before we dry out and temps rise above freezing.

REST OF TODAY AND TONIGHT

Temperatures gradually rise a few degrees above freezing, that cold east wind continues to blow, and road conditions improve.  Travel should be just fine where little snow fell, and travel should be much better this afternoon in the areas that saw under 4″ of snow.  Snow showers continue, but I expect less than 2″ additional accumulation.  Best chance will be in the west metro

ALL AREAS freeze tonight, and a dusting to 1″ is possible in the east metro as a wrap-around band nails the Gorge and north-central Oregon with a bit more snow.  Most likely dry west metro

Mainly dry, most roads, even east metro, in good shape by afternoon.

Two waves of moderate-heavy precipitation roll through the region during this time.  Models this morning all say much of the metro area will be on the warm side of the arctic boundary.  By that I mean most likely we’ll get southerly wind with both of these as surface low pressure goes by to the north.  There’s a decent chance the entire Willamette Valley gets little or no snow while the metro area starts as snow and goes to rain quickly during the night.  Looks like some areas north of Portland will get a big snow event (don’t yet have a good handle on exactly where), and the Gorge is going to get buried in a LOT of snow.  I think the WRF-GFS sums up snow Sunday PM-Monday PM pretty well.

I’ll take a much closer look at this later today, but for now (if you have the snow), get outside and enjoy the sledding!