Here we are entering the last 10 days of January and it’s still Dullsville on the weather maps for the next week.  Unless something pops up early-mid NEXT week (more on that in a moment), December and January end up with only one significant weather event.  That would be the January 5th minor wind storm.

It’s hard to believe, but this is my 28th winter forecasting in the Portland area.  Technically I was in Hood River for part of the 1993-1994 winter but it still counts.  Folks, up to this point I feel this is the most boring cool/wet season I’ve seen in my 28 winters forecasting in Portland.  1991-1992 (my first year after finishing college at U.W. in Seattle) was about as slow and so was 2002-2003.  In 2003 at least we saw a few pineapple express events in January.  Regardless, this would be in the top 3 out of 28 on the “meteorological boredom scale” if there is such a thing. 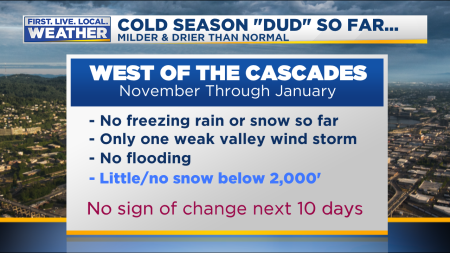 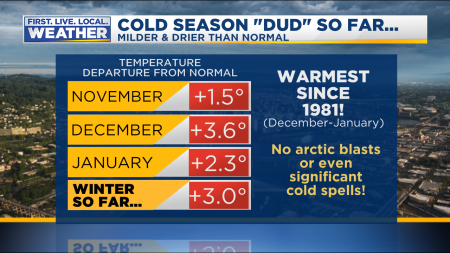 The “winter so far” with the +3 degree departure refers to meteorological winter December-January.  We have not seen a widespread Pacific Northwest arctic blast since December 2013.  It’s been 5 years!

Not only has the weather been quiet this season, but temperatures have been unusually warm since Halloween.  Dry as well 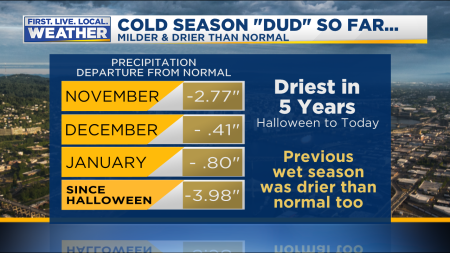 We’ve done some catch-up in late December and now again in late January, but overall it  has been drier than normal since early November.

A building upper-level ridge along the West Coast dominates our weather for at least the next 7-10 days, possibly longer.  This has been well advertised by models for quite a while.  A couple of weak systems passing over the ridge give us lots of clouds and occasional light rain tomorrow and Wednesday.  Much of the rain will be focused on the mountains and not lower elevations.  Expect plenty of gloom but not all that much rain Tuesday-Wednesday along the I-5 corridor.

Beyond that the ridge strengthens later this week and through the upcoming weekend.  There are hints that we could see our warmest temps since December; sometime between Friday and Sunday.  850mb temps rise into the teens Saturday and we get weak offshore flow.  We are almost out of “deep inversion season” and we are not starting with a chilly airmass this week.  The result could be high temps one of those days approaching 60 degrees.  It is not unheard of to reach a 60 degree high in late January around here.  And it can happen in this pattern.  Stay tuned later this week for that.

Notice the strong and warm ridge on both GFS and ECMWF ensembles for Saturday:  Spring ski conditions in the Cascades!  Some 60s at the beaches possible as well.

Most ensemble runs say this ridging will hold for most or all of NEXT week (through the last day of January).  But you see the ridge moves farther west on both GEM and GFS ensembles?  This is the last day of the month.

Several ensemble members want to drop a cold system through Canada much closer to us next week.  If so, we could go from sunny and mild to sunny and cold.  But each run is different; very low confidence at this point.  The ECMWF ensemble temps show a continuation of mild temps into early February 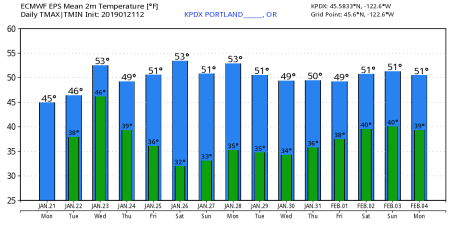 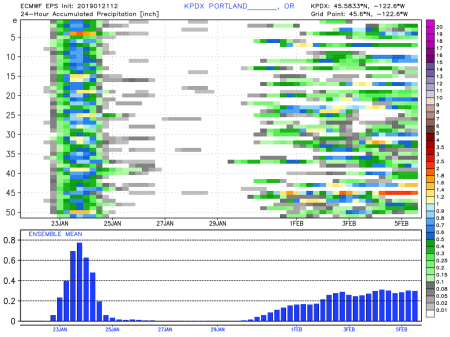 This entry was posted on Monday, January 21st, 2019 at 7:35 pm and is filed under Weather. You can follow any responses to this entry through the RSS 2.0 feed. Both comments and pings are currently closed.