Another Low Snow Year In The Cascades

I feel like we’ve done this before; here we are in mid-January and I’m blogging about low snowpack in the Cascades.

First, we have a great three day MLK weekend coming up for skiers/snowboarders.  There is plenty of snow for everyone: 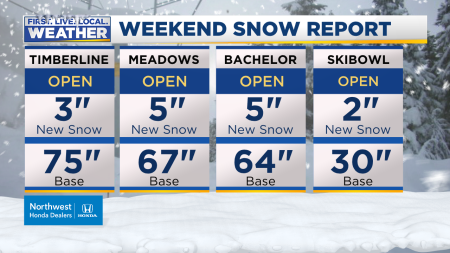 And the only rain should be downpours for night skiing Friday night as a warm front moves over the Cascades.  Avoid that time; the rest of the weekend should be just fine. 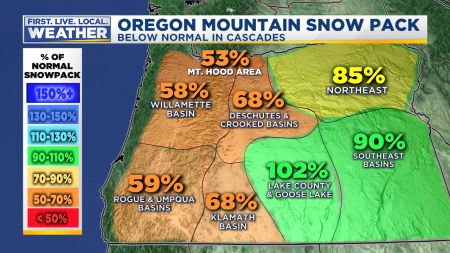 The lack of storminess and warmer-than-average temps has allowed the snowpack (as a percent of average) to drop this month.  Only SE Oregon is in good shape at this point.

It’s ANOTHER low snow year in the Cascades.  I just checked Mud Ridge, at 4,100′ just SE of Government Camp.  This station has seen below average snow water in mid-January 8 out of the past 10 winters!  Only 1 has been above average, and one right at average.  So you aren’t crazy thinking that we haven’t heard about big Cascade snow years lately.  What’s most interesting to me is the total lack of lower Cascade snowfall.  Again this year we’ve rarely seen any snow below 2,500′.  Way down in the foothills at 1,000′, I haven’t seen snow at my home yet this season.  First time that has happened since I moved there in 2004.

So no, this isn’t a horrific snow season like 1991-1992 or 2004-2005, or 2014-2015, but we’re limping along once again.  I see maybe a foot or so at Government Camp coming up Sunday and early Monday, but then mainly dry or even some rain in the mountains the rest of next week.  Anecdotally it seems to me we are getting more ridging the past 10 years than in the past, often centered somewhere near the coastline.

Speaking of…models still show strong upper-level ridging much of these next two weeks.  Check out the ECMWF run showing ridging this next week, and the week following:

And you can see the below-average precipitation forecast for the entire West Coast.  California will be drying out along with the Pacific Northwest.  If these maps are correct, January will go out mild and dry.

Tomorrow will be a soaker once we get past about 9am.  A warm front with lots of moisture throws steady rain our way all afternoon and evening.  But Saturday is an “outdoor day” since a stationary front sits across southern Oregon.  Most likely the NW tip of Oregon and SW Washington remain dry during the daylight hours.