Some good news in the Columbia River Gorge.  Well, actually bad news for kids; I think there won’t be an “Ice Day” or “Snow Day” for some of those kids.

We’re only talking a difference of maybe 3 degrees, but that’s enough to take some areas “out of the running” for snow or ice accumulations.

Light snow at times between now and around 1am, then mainly dry rest of the night

1-4″ with lightest totals down at freeway/river level.

I-84 remains either mainly clear or just slushy 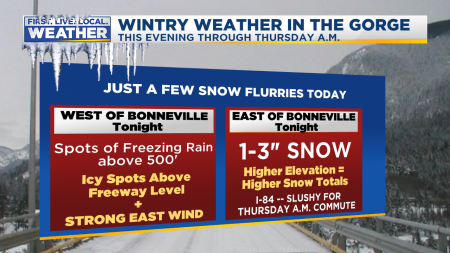 Not only are temps just a few notches warmer than I expected 24 hours ago, but this band of frozen precipitation is gone after midnight or so.  The brand new RPM model run for 1am:

So there you go, this is still the “biggest snowfall of the season” in the Gorge, showing what a real dud this winter has been so far!

This entry was posted on Wednesday, January 16th, 2019 at 7:32 pm and is filed under Weather. You can follow any responses to this entry through the RSS 2.0 feed. Both comments and pings are currently closed.