Models have done a very good job showing the strong southerly wind surge arriving in the metro area between 10pm & Midnight or so.  Strong wind hit Salem in the past hour and now it’s arriving in Portland.  The easterly Gorge gradient has rapidly died down so ALL of us get that strong southerly direction the next 2 hours or so before dying down.

At 10pm here at the peak gusts so far, most notable for a few strange spots which we typically don’t see strong wind reports from

I’m not on the air right now due to a death in my close family earlier today.  But Anne Campolongo will be doing a great job on FOX12; you can watch for the next hour.  Don’t worry, this weather geek stuff relaxes me and I enjoy it or I wouldn’t be posting.  Strange, but true!

Be careful as always if you use a generator/candles/heater while the power is out tonight.  I see there are already 11,000 PGE customers out of service right now.

It’s been a real quiet winter so far, and it appears to remain that way the next 10+ days.  But a system sliding up the coastline tonight stands a good chance at giving us the strongest gusts of winter so far…

Coastline: The same sequence of events, gusts 60-80 mph are likely out there.  A brief but powerful hit of wind during the same time period as here in the valleys

Oregon Cascades:  Strong wind during the night, but ski areas will be closed at the time

Central/Eastern Oregon:  Windy, but nothing too unusual.

It’s very nice to see ALL models showing the same basic progression of a surface low pressure center coming up the coastline this evening/tonight, a 982-987 center tracking from off Cape Blanco around sunset to somewhere in northern Puget Sound sometime between 1am-4am.  Once again the WRF-GFS from UW along with NAM-MM5 are both most intense deepening the low at the same time it’s moving north.  They both show it strengthening all the way until it moves north of us; never good if you want to avoid a windstorm.  Slide show gives you the basic idea.

Note the tight packing of isobars for 1-3 hours directly over NW Oregon and SW Washington.  They are also oriented west-east at the same time. This is the PERFECT position for maximum wind gusts in the majority of our viewing area through the I-5 corridor from Longview to Albany.  In fact it’s rare to see such a setup.  This has grabbed my attention along with the quick rise in pressure at the same time.  Big pressure rises = lots of air rushing north.  The pressure gradients are a big deal here too.  NAM-MM5, WRF, RGEM, 3KM WRF-NAM, ECMWF; they all give us at least 15 millibars pressure gradient EUG-OLM.    If this were a 970-975 mph low we’d be in major windstorm territory, but luckily it isn’t.  The overnight ECMWF responded with gusts 60+ in the valley 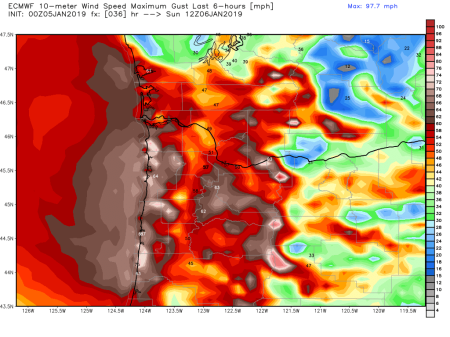 and the 12z WRF thinks we’ll have gusts up around 60 as well; this is very strong for the Portland area with this model.  If we really do get widespread gusts 60+ in the metro area it would be the strongest storm since December 2006.  We’ve had a few events where 60+ hit smaller parts of town, but not like what is depicted on both pressure and wind gust maps from the WRF.

At the same time I’ve also noticed a few models don’t have a tight closed low (12z GFS and RPM).  That held back my wind speed forecast a bit from these numbers; I must be getting older and more conservative.

One other factor to consider is convection; pretty good hints that we’ll get hefty showers and/or thunder showers with the passage of the strongest wind; that can mix the stronger wind overhead down to sea level nicely.

By the way, the strongest gust at PDX so far this winter is 46 mph, once from an east wind and once from the southwest.  Hillsboro airport has hit 42, and Salem 48.  We should beat these numbers tonight.

As my boss once said; even the most well-forecast weather events never turn out exactly like we expect.  We have the basic timing and intensity down well, in about 15 hours we’ll see what happens!

A side note:  I want to give a HUGE shout-out to all my peers at the Portland National Weather Service.  As far as I’m aware, they are all going into week #2 with no pay.  Yes, yes, I know there’s a good chance they will get paid when it’s over as in the past.  But that makes the situation even more sad and wasteful than it already is.  In the private sector how many of you would continue showing up for a job if the boss told you “no pay until further notice”?  I’d be looking for another job, wouldn’t you?  Kudos to them for sticking around, staying on the job, and helping to protect lives/property during these weather events.  Remember that next time you complain about “government workers”.