Consider today a “practice run” for a real snow/ice event at some point later this winter.  Thanks to Tracy Hinson for that analogy!

We had a milder/drier version of a Columbia River Gorge Snow/Ice Storm today.

This same sequence of events happens time after time, year after year.  What changes is the intensity of the precipitation and the temperature of the airmass flowing from eastern Oregon into western Oregon.  Cold+wetter = ice spreads farther west into the metro area.

This evening the chilly airmass is VERY thin over the metro area and western Gorge.  Troutdale profiler shows “warm” air is only a little over 1,000′ overhead. 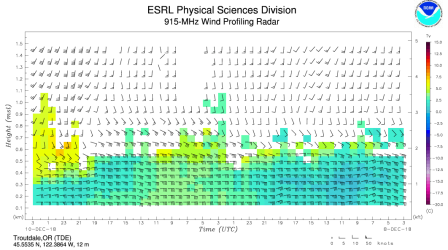 The current view is on the left side; two days ago to the right.  You see the yellow colors (warmer air) working their way down.  Wind is southerly up around 1,800′.

The PDX-DLS pressure gradient has gone from 10 millibars this morning to only 4.2 this hour.  Meanwhile the EUG-OLM (Eugene to Olympia) gradient has gone southerly, about 2.4 millibars.  The weak southerly flow will dominate by sunrise, so NO FREEZING TONIGHT west of the Cascades. 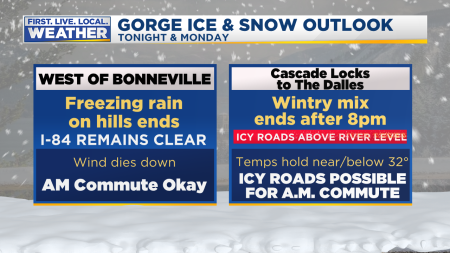 After the steady precipitation from the cold front moves east later tonight, there may be areas of clearing from Hood River east; enough to refreeze some wet roads. 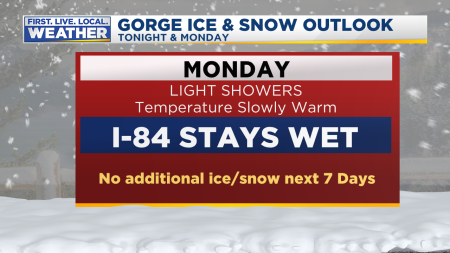 The next 7 days look quite uneventful.  Wet at times, but no cold systems, no storms, but occasional mountain snowfall.  Notice the up and down freezing level.  Avoid skiing Tuesday or Thursday; both those days could be rainy or at least rain/snow mix depending on your elevation. 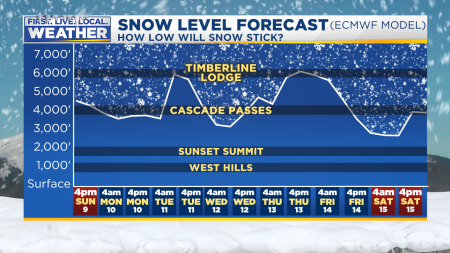 The combo of rain, rain/snow, then snow will slowly build up a sorely needed base.  ECMWF says maybe 15-20″ by the time we get to next Sunday. 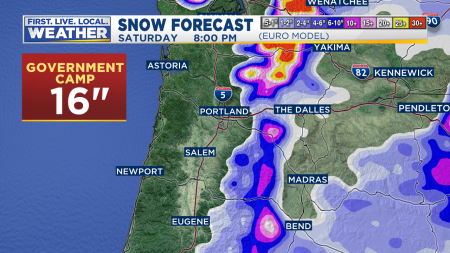 So we don’t have FEET OF SNOW on the way for the Cascades (that’ll be up north in Washington).  Now that all ski areas have at least a few runs open, they should be able to open up a bit more terrain.  There are hints that NEXT week we could see more significant mountain snow; that’s around Sunday the 16th-Wednesday the 19th.

But in this El Nino winter I wouldn’t be surprised to see split-flow return within a couple of weeks.  Regardless, your life can continue as normal for at least the next week, unimpeded by any sort of damaging/crazy weather.