Today was a spectacular late summer/early fall day with temps in the upper 70s in the metro area after starting out around 50.  We officially hit 80 here in Portland.  It COULD be the last 80 of the season, but I think it’s unlikely.  We can easily hit 80 in the last half of September and sometimes even early October (more rare).  I’m quite confident we won’t hit 80 in the next 6 days as we’re entering our coolest week since back in early June.

The well-advertised upper-level trough of low pressure that will sit over us most of the week is approaching.  That means a first band of showers tonight, then off/on showers Tuesday through at least Thursday…maybe into Friday as well. 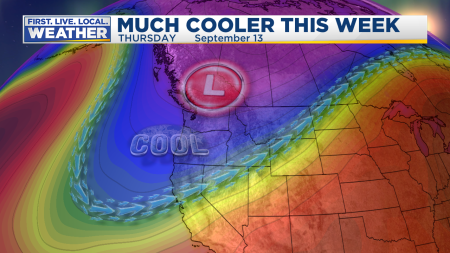 As for rain, we could use a HUGE soaking.  At this point it appears we’ll get some decent showers both Tuesday and Wednesday.  Add a few light showers in Thursday and Friday and we COULD get up to 1/2″ rain in some lowland locations west of the Cascades.  Here’s the ECMWF forecast for the next week.  Not encouraging east of the Cascades but this will put Fire Season 2018 on life support west of the mountains. 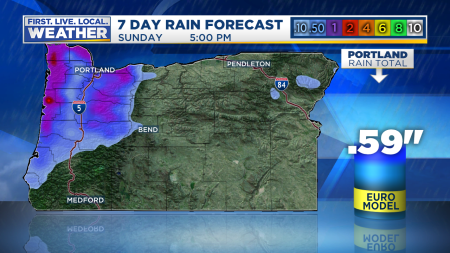 It’s hard to believe, but Salem is STILL breaking an all-time dry weather record. Today was the 90th day without rain down in the Cherry City 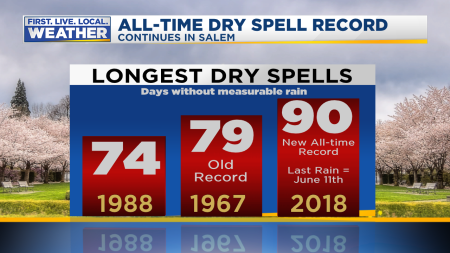 That should finally change this week; I think it’s unlikely you folks make it to 100 days.

Is this the beginning of a long wet period?  I don’t think so…at least at this point it seems that we back off the showers after Friday.  Note the 24 hour rainfall from the ECMWF ensembles shows most ensemble members turn drier after the 14th/15th.  Nothing like the dependable dry weather of summer but more of a typical September on/off again shower chances: 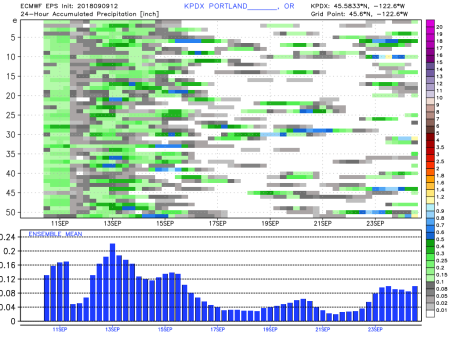 As for temperatures, you see the ECMWF ensemble temps hold us near or below normal most of the next two weeks 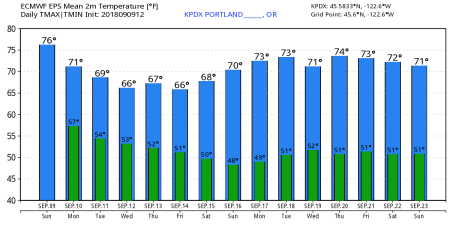 On another note, we ran a story here on FOX12 both last night and today about low water levels on the Columbia River are leaving some boats stranded.  This pic was taken Friday or Saturday by Katie Watts 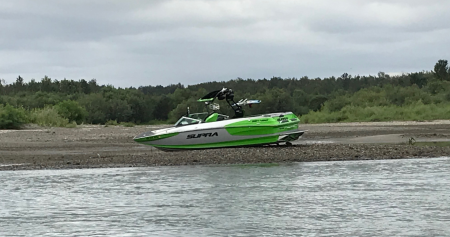 I’ve been driving by/along the Columbia River on my daily commute for most of the past 25 years and see the level every day. Some years it goes REALLY low in September/October and other years it just goes a bit low (like this year).  But this time of year always features the lowest water of the year.  See the 365 day plot of river level at Vancouver shows it’s at the same level as last September/October and right around normal. 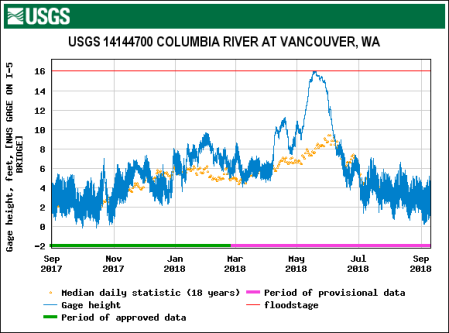 Looking at that you wouldn’t think there would be any boating issues…every early fall boaters need to watch for exposed sandbars.  But then take a look at the two week graph 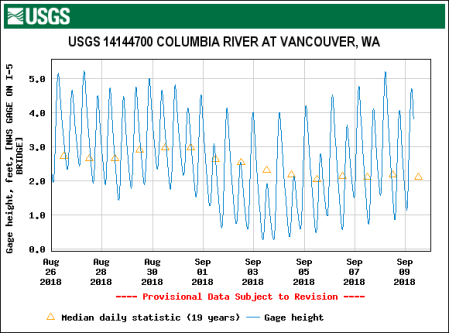 A more interesting phenomenon shows up…the twice daily rise/fall of the river with the tide.  Even this far upstream the Columbia is affected by the ocean tides.  And I’ll admit it’s a greater range than I expected.  A 2-4 foot rise/fall every 6 hours appears to be the story this time of year.  On Sunday it fell over 4 feet in just 6 hours!  That means a boat you dock up against an island in 3 feet of water is suddenly stranded on dry ground the next morning.  Luckily the water WILL rise again…if you have 6-18 hours to wait…