It was briefly hot out there this afternoon, with PDX reaching 90+ (91) for the 31st time this summer.

Easterly flow topped out between 20-35 mph at the west end of the Gorge this morning.  Pressure gradients turn back to light westerly on Thursday which should keep us below 90 degrees.

Was it the last 90 degree temperature in Portland this year?

It COULD be, especially considering we see no real warm/hot weather in the next 10 days.  That would take us to mid-September.  It’s interesting to note that in the past 6 years we haven’t reached 90 beyond September 20th.  The AVERAGE date for the last 90 is today…the 5th.  So there’s no reason this couldn’t be our last 90 of the season.

It’s pretty obvious that we’re headed into a cooler pattern after Friday.   The warm upper-level ridge over us

gives way to a cool upper-level trough much of next week.

This means much cooler and cloudier weather is on the way; check out the ECMWF ensemble temperature forecast for the next two weeks in Portland.  Pretty good agreement with the operational model here.  Notice it shows coolest temps (relative to average for this time of year) appear to be early next week: 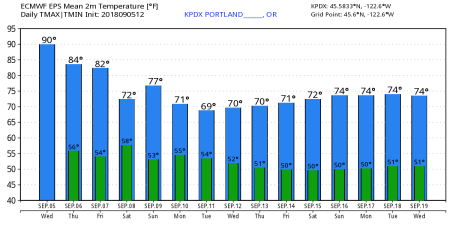 But the million dollar question…HOW MUCH RAIN?

If we’re going to be cool and cloudier, let’s get a good inch or two of rain.  But as of now that doesn’t look likely based on the GFS and ECMWF models

Both show at least 0.25″ in the lowlands, maybe even 0.50″ if we get lucky through next Thursday.  As expected they do hint at heavier rain in the Coast and Cascade Ranges.  Regardless, it’s obvious this will put a big dent in the fire season.  Even a little moisture this time of the year (with its low sun angle) can do a lot of good.  Check out an interesting fuel moisture graph that covers stations on the west side of Mt. Hood National Forest

A “1000 hour fuel” refers to large fuels (8″ diameter or larger).  First look at an “average” year…the gray line.  In the north Cascades of Oregon fuels in a “typical year” are driest just after mid-August and then gradually moisten up through September and October.  The red line is the driest the fuel has ever been (on any one date) through the period of record.The yellow line is last year; see how that dry east wind period around Labor Day kept fire danger extremely high until the 16th of September?  The Eagle Creek Fire blew up during this time and there were other huge fires burning across the Willamette/Umpqua National Forests.  You can see the season-ending rain event the following week as many inches of rain fell in the forest; a somewhat miraculous event for this time of year.  Also note the record minimum fuel moisture was set a few times last year, including much of early September.  This year we seem to have “bottomed-out” around the 20th of August, setting a few new “record dry” days just ahead of that time.  Showers and cool weather moistened things up the last week of August and earlier this week so right now we’re running just slightly drier than average for early September.  Hopefully it all makes sense, of course you can click on the image for a larger view.