Thick Fire Smoke Is Back; But It Keeps The Heat Away

It’s back! For the first time since last summer’s Eagle Creek Fire,  the Portland metro area is basking in thick low-level fire smoke. This type of smoke with lowered visibility is what SW Oregon has been dealing with for a month!  Here’s a pic from Andrew Mork 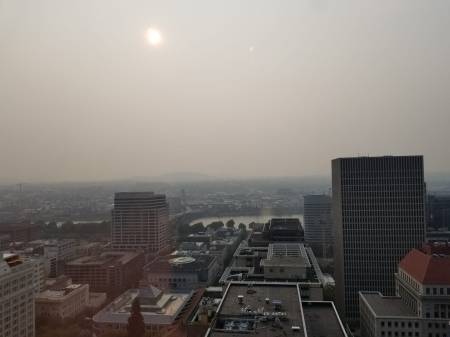 Air quality is in the UNHEALTHY category across the Portland metro area and Columbia River Gorge this morning.

Up until this point we’ve only seen smoke high overhead. Easterly wind has brought smoke from Eastern Washington down into our area. It should clean out quite a bit tomorrow with a switch back to westerly wind. Air quality sensors from Oregon DEQ show UNHEALTHY air over us right now due to those smoke particles. Notice it only extends into the metro area with cleaner air down in the Willamette Valley.

The easterly flow this morning is the strongest we have seen since June.  Wind has been gusting up around 40 mph the past few hours at Crown Point in the western Gorge and Corbett was just about the warmest place in the metro area last night…only briefly dipping into the upper 60s due to mixing from the wind.

The wind goes back to westerly at low levels tomorrow which should clear us out quite a bit, but we’ll still be left with all the high level smoke as we’ve seen the past few days.  Fires are burning north of us in Canada, northern Washington, and to our south in SW Oregon.  It’s hard to get out of the smoke until flow goes westerly at all levels; we’ll likely not get totally out of it until Friday west of the Cascades.  Note the HRRR experimental smoke model forecast for Wednesday afternoon has the entire Pacific Northwest bathed in a smoke layer of some sort.  Click the image for a loop 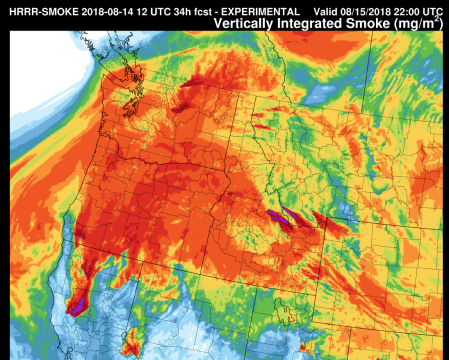 The one HUGE benefit is that the smoke layer is going to keep temperatures well below what we would typically see with this airmass.  We have easterly offshore flow plus an 850mb temp of +20 on the morning sounding at Salem.  Models are forecasting +22 by this afternoon.  Under blue skies I would forecast a high of 100 this afternoon.  I think 90-93 is more likely due to the smoke…hot, but nothing crazy hot.