Hot Weather Through Thursday, Then Cooling

We are two days into our early August heat wave; I expect three more hot days this week.

Will we hit 100 degrees?  I think it’s unlikely since fire smoke will continue to stream north through the rest of the heat wave.  Today you could see the “dim sun” outside giving the ground a yellowish look.  It sure reminds me of late last summer!  That, even with 850mb temps up around +23 Wednesday & Thursday should keep us just under 100.  But it’ll be close.

There is excellent agreement that an upper-level trough will move overhead late Friday and Saturday, pushing in a 5,000′ thick layer of cool marine air along with a much cooler atmosphere higher up.  That drops us into the 80s Friday and maybe 70s on Saturday.

By the way, as of this moment (through August 6th) we are enduring the 2nd hottest summer on record in Portland.  That’s right behind 2015 and just ahead of 2009.  Of course we still have 3 weeks left in meteorological summer so we’ll see how things turn out in the end.  Regardless, any hopes of a reasonably “cool” or average summer have been dashed by now! 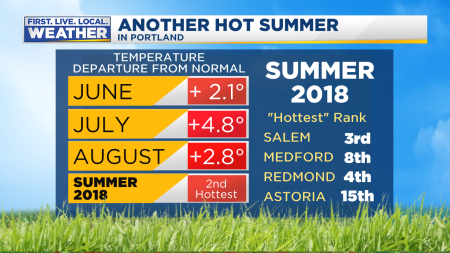 Notice Salem, which has a much longer period of record, is running at 3rd hottest.  Other cities aren’t even in the top 5.  Seems like this is likely due to a growing urban heat island on top of our warming climate.  Cities are warming more quickly than rural areas or smaller towns.

Try to stay cool the next few days!