We hit 92 in Portland today, a few degrees below my 95 degree forecast high due to a little more marine air moving inland plus a thick layer of smoke overhead. 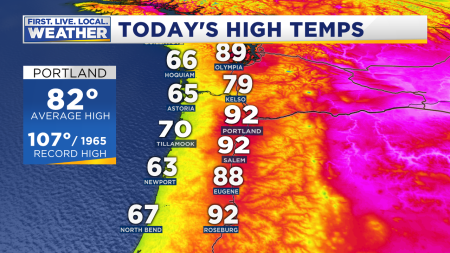 Notice Kelso/Longview barely made it to 80 degrees!  A clear sign that someone has turned on nature’s air-conditioning west of the Cascades, but it’ll take another day for us to drop into the 80s here in the metro area.

Today was the NINTH consecutive 90 degree day in Portland, the 2nd longest streak on record.  It may have been the last 90 of this heat wave, more on that below. 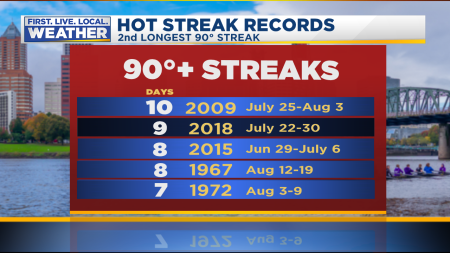 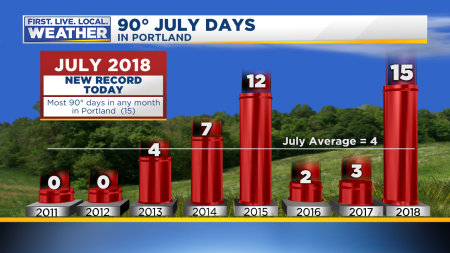 Due to a thicker marine layer tomorrow (with some morning clouds), I think it’s unlikely we hit 90 again tomorrow in the metro area…likely topping out in the 85-88 degree range…much better!

We sure have a dramatic change coming Thursday and beyond.  First we get a huge marine push Wednesday night.  Models show the marine layer thickening up to around 5,000′ or so by Thursday AM.  A marine layer like that will keep us cloudy and in the low-mid 70s at the warmest point during the afternoon…quite refreshing! Expect a similar setup Friday.

By the way, July ends tomorrow and we’ll set a new record for the driest late spring & early summer on record in Portland (May-July).We’ve never seen it dry out so early in the late spring and remain dry right on through the summer, although 2015 & 1992 were close. 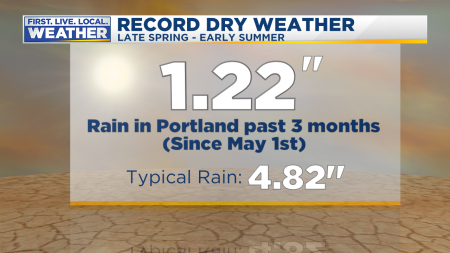 Salem records go back quite a bit further in time, yet it’s still the driest down there as well with only 1922 and 1924 close.  Hopefully we’ll get a “September miracle” downpour again this year like the one that doused the Eagle Creek Fire last year.

This coming weekend will likely be dry, but once we move into later Sunday and the rest of next week the forecast gets tricky; rain showers have become a real possibility.  That’s because models are showing a sharp upper-level trough with cooler air and showers moving down to its typical “June position” just offshore.  You see the ECMWF forecast from both Tuesday and the end of next week here: 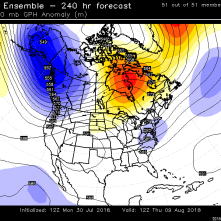 In this situation details are all over the place with each run of each model showing different disturbances rotating out of the trough and over the Pacific Northwest.  To see the possibilities you can look at the ECMWF ensembles:

Each horizontal line on the upper half of the chart is one of the “ensemble members”.  Time goes from now on the left to 15 days from now on the right.  Notice there’s some decent agreement on showers AT SOME POINT between August 5th and 10th (next work-week).  Seems to be quite a bit of clustering around the 6th-8th too.  Hmmm.  We could end up with more than just a sprinkle…could actually be a quarter-inch of rain or more.  It’s still quite far out, so to summarize:

IF YOUR WORK/BUSINESS REQUIRES TOTALLY DRY CONDITIONS, KEEP A VERY CLOSE EYE ON THE WEATHER FORECAST FOR SUNDAY AND BEYOND

Of course you can probably guess that we can forget about 90s during that time.  Check out the ECMWF ensembles for temperature…below average for most of the time from this Thursday through the following 7 days.

Does this mean all of August will be cloudy, cool, & showery?  Absolutely not, but it’s very clear the first 10 days of the month will be far different than July!

This entry was posted on Monday, July 30th, 2018 at 9:24 pm and is filed under Weather. You can follow any responses to this entry through the RSS 2.0 feed. Both comments and pings are currently closed.