It’s REALLY slow weatherwise so I’ve been having some weather blog writer’s block.  Or possibly just a bit lazy as summer rolls on…

Take a look back at June, which nationwide was much warmer than average, including about half of the Pacific Northwest. 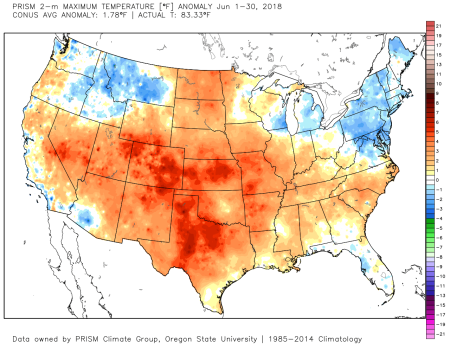 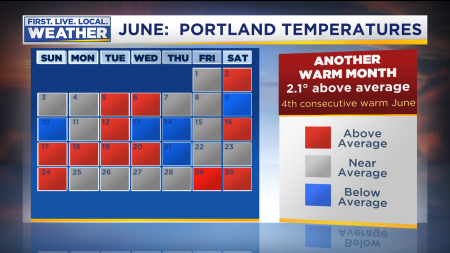 We saw 4 days at/above 90…most in that warm period mid-month.  Most interesting to me is that it’s the 4th consecutive warm June.  I’ve ALMOST forgotten about those terrible cold/wet June months when my garden just didn’t want to grow (2010, 2011, 2012).

It was another dry month of course, unless you happened to be right under one of those thundershowers late-month. 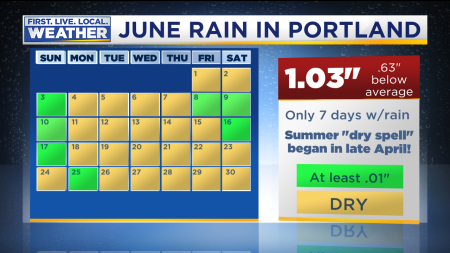 We’ve see less than 1.5″ since the middle of April! 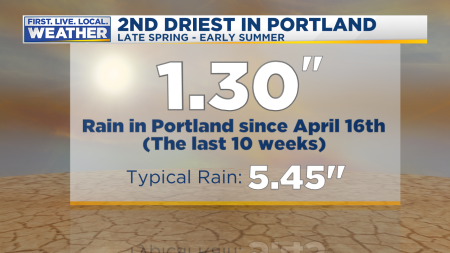 Only one other time in Portland history has it been even close to this dry.  That was late spring-early summer 2015.  Of course that turned into a terrible fire season with the Canyon Creek fire around John Day and numerous massive fires up in Washington.  We’ll hope for some cool spells with a few showers at times over the next 8 weeks to keep things under control this year.

The weather pattern is interesting over the next 7 days with upper-level ridging developing over the central USA.  That’s where the extreme heat will be.  This is the 500mb map for Thursday: 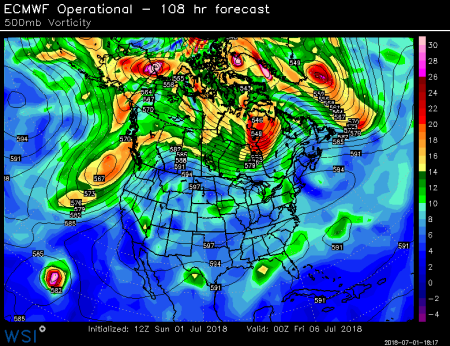 We’ll be on the far western periphery of that ridge, which allows weak systems to bring occasional onshore flow at times.  Over the past 5 days I’ve noticed a trend of models trying to push that ridge right over the West Coast and then backing off and keeping it farther east.   We’ll see if that continues.

For now, it looks like we have a great weather pattern in general for this first week of July.  No real heat, thunderstorms, or cool/wet weather.  Enjoy!